Sonam Bhutia (born 26 January 1994) is an Indian footballer who plays as a midfielder for Mohammedan in the Calcutta Football League.

Born and brought up in Shotak, Sikkim, Sonam Bhutia is a product of the Sports Authority of India, Namchi. He was part of the SAI squad that participated in the Subroto Cup in 2008. Though his team lost in the semi-final stage, Sonam who played in central defense got a scholarship for good performance. [2]

Bhutia had a brief stint at the Mohun Bagan SAIL Football Academy. When Mohun Bagan SAIL Football Academy went to participate in a tournament at Namchi, Shyam Thapa spotted Sonam and selected him for the Durgapur based Mohun Bagan Academy. However, after 4 months, Sonam went back to Namchi because of his schooling. Though Sonam got offer from United Sikkim around 4–5 years back, he joined the club in 2012 after completing his studies and played there for a couple of seasons. [2]

He also has represented Sikkim in the Santosh Trophy for 3 consecutive seasons from 2009 onwards. He was selected in the U-23 Indian Camp held at Bangalore last year, but due to passport issues, he was not kept in the final squad. [2]

Bhutia made his debut for United Sikkim F.C. on 24 January 2013 during an I-League match against Mohun Bagan at the Salt Lake Stadium in Kolkata, West Bengal in which he came on as a 69th-minute substitute for Sandesh Jhingan; United Sikkim drew the match 0–0. [3]

On 2 August 2016 it was announced that Bhutia had signed with Mohammedan. [4]

Bhaichung Bhutia, also spelled as Baichung Bhutia, is a former Indian professional footballer who played as a striker. Bhutia is considered the torchbearer of Indian football in the international arena. He is often nicknamed the Sikkimese Sniper because of his shooting skills in football. Three-time Indian Player of the Year I. M. Vijayan described Bhutia as "God's gift to Indian football". Bhaichung Bhutia has an older brother named Chewang Bhutia. Chewang and Bhaichung both went to boarding school. Bhutia has had four spells at I-League football team East Bengal Club, the club where he started his career. When he joined English club Bury in 1999, he became the first Indian footballer to sign a contract with a European club and only the second to play professionally in Europe, after Mohammed Salim. Afterwards he had a short loan spell at the Malaysian football club Perak FA. As well as this he has played for JCT Mills, which won the league once during his tenure; and Mohun Bagan, which failed to win the league once during his two spells, in his native India. His international footballing honours include winning the Nehru Cup, LG Cup, SAFF Championship three times and the AFC Challenge Cup. He is also India's second most capped player, with 82 international caps to his name. He is also India's second youngest international goal scorer after Jerry Zirsanga when he scored his first goal against Uzbekistan in 1995 Nehru cup at the age of 18 years 90 days.

Mohun Bagan Athletic Club, commonly known as Mohun Bagan, is a major Indian multi-sport club based in the Kolkata, India. Founded in 1889 as Mohun Bagan Sporting Club, the club's football section is one of the oldest football clubs in India and Asia. The club is most notable for its victory over East Yorkshire Regiment in the 1911 IFA Shield final. This victory made Mohun Bagan the first all-Indian side to win a championship over a British side and was a major moment during India's push for independence.

The IFA Shield is an annual football competition organized by the Indian Football Association. The Indian Football Association is the association governing football in the state of West Bengal, came into existence in 1893. Named after the Association, the IFA Shield Tournament was started in the same year. It is one of the oldest football tournaments in India and the second oldest Cup in the world. During the initial years after its inception, the IFA Shield was dominated by British army teams. However, their stranglehold over the Shield was broken in 1911, when Mohun Bagan Athletic Club became the first Indian team to win the IFA Shield by defeating East Yorkshire Regiment 2-1. That was a historic moment for Indian football, as the natives beat the Englishmen at their own game. East Bengal F.C. has won the IFA Shield 29 times, while their archrivals - Mohun Bagan has bagged the honour 21 times. 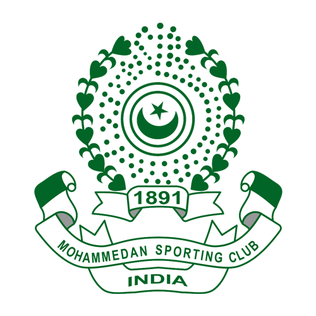 Mohammedan Sporting Club, founded in 1891 at Kolkata, is one of the oldest and one of the most popular football clubs in India, with a support base in all parts of the country. The club currently plays in the I-League 2nd Division and the premier division of the Calcutta Football League (CFL). In 1934, Mohammedan was the first Indian club to win the CFL and they continued their run until the 1938 season. Before Independence, numerous triumphs against British teams earned the club huge support from all India. Mohammedan Sporting Club became the entity against British oppression and the support continued even after Independence. It also became the first Indian club to win the Durand Cup in 1940. After Independence, it became the first Indian club to win on foreign soil by lifting Aga Khan Gold Cup in 1960. 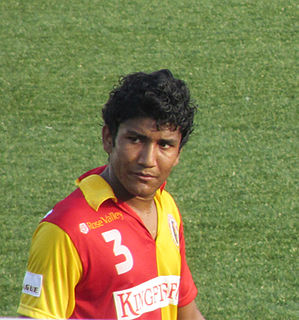 Nirmal Chettri is an Indian footballer who plays mainly as a defender for FC Goa. 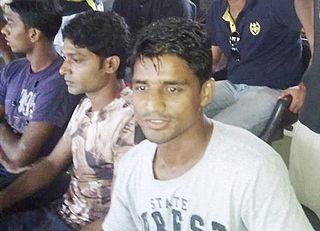 Safar Sardar is an Indian footballer who plays as a defender for Mohun Bagan A.C. in the I-League and Calcutta Premier Division.

Lalrozama Fanai is an Indian professional footballer who play as a defender for East Bengal in the I-League.

Biswajit Saha is an Indian footballer who plays as a left back.

Tirthankar Sarkar is an Indian footballer who plays as a midfielder for Mohun Bagan in the I-League.

Rajib Ghorui is an Indian professional footballer who plays as a midfielder for Aryan FC in the Calcutta Football League.

Bikash Jairu is an Indian professional footballer who plays as a midfielder for East Bengal in the I-League and for the Indian national team.

The game of football was introduced in India by the British in the mid-nineteenth century. It spread because of the efforts of Nagendra Prasad Sarbadhikari. In 1888 the Durand Cup was founded by then India's Foreign Secretary, Mortimer Durand at Shimla, India. In 1893 the IFA Shield was started as Calcutta, then capital of British India, soon became the hub of Indian football.

The 2016 IFA Shield was the 120th edition of the IFA Shield. The tournament is designed as a U19 youth football tournament since 2015.

Rana Gharami is an Indian professional footballer who plays as a defender for Odisha FC in the Indian Super League. 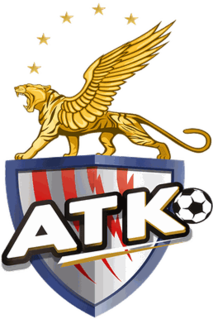 ATK Reserves and Academy is the youth system of Indian Super League side ATK. Based in Kolkata, West Bengal, the reserve side participates in the I-League 2nd Division, the second division of Indian football and in Calcutta Football League, Men's professional football league in the state. The club's academy was founded on 15 August 2018 and the Under-18 side participates in the Hero Elite League, the highest level for youth football in India.

The 2003–04 season is East Bengal Football Club's 8th season in the National Football League, and also marks the club's 90th season. East Bengal successfully defended their league title from the previous season, competing in the 2003-04 NFL. They have also won the 2003 Calcutta Football League and the 2003 ASEAN Club Championship. They became runners-up in the 2003 Super Cup, 2003 Durand Cup and 2003 IFA Shield.