Born in Soolamangalam, a village with musical heritage in Thanjavur district of Tamil Nadu, of Karnam Ramaswmai Ayyar and Janaki Ammal, the sisters had their training in music from K. G. Murthi of Soolamangalam, Pathamadai S. Krishnan, and Mayavaram Venugopalayyar.

The duo-sisters were very popular for their matchless rendition of national and devotional songs. They had a hectic practice for about three decades and were much sought after for providing background music in films. Their Kanda Shasti Kavasam album is very popular with the Lord Muruga devotees. [2]

Among the two of them, Jayalakshmi had rendered only a few songs in films and most of it would be duets with Rajalakshmi, whereas Rajalakshmi had more chance as a playback singer in films. Her voice suits all the categories of youthful, soft mellifluousness, evocative feelings, perfection of pronunciation and the best in devotional songs.

Rajalakshmi assisted S. M. Subbaiah Naidu in Konjum Salangai. Both Jayalakshmi and Rajalakshmi as music directors by the name Soolamangalam Sisters composed music for films like Dharisanam (1970), Tiger Thaathachari (1974), Appothe Sonnene Kettiya (1979) and Pillaiyar (1984). They also sang under their own compositions.

Rajalakshmi died on 1 March 1992, aged only 51 because of cardiac arrest and gastritis which lasted for about 12 years. Jayalakshmi was strongly affected by her sister's death. She outlived her for 25 years and died at her home in Chennai on 29 June 2017, aged 80. 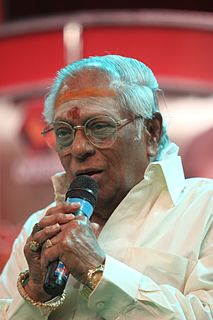 Thenkarai Ramakrishna Mahalingam born in Sholavandan Thenkarai was an Indian film actor, singer and music composer of the 1940s and 1950s. He was known for his melodious songs mostly based on romantic or devotional themes.

Lourde-Mary Rajeswari Eswari is a veteran playback singer of the Tamil cinema, Telugu cinema, Malayalam cinema and Kannada cinema industries. She also sang in other languages like Hindi, Tulu, and English. She has won Kalaimamani, the Tamil Nadu's state award, for her contributions to the film industry.

K. Jamuna Rani is a prolific Indian playback singer who has sung over 6,000 songs in Tamil, Telugu, Kannada, Malayalam and Sinhala languages.

Subburayulu Munuswami Subbaiah Naidu was an Indian composer, conductor, and orchestrator. He was one of the oldest music directors. He worked as an in-house music composer for Central Studios and Pakshiraja Studios and well associated with S. M. Sriramulu Naidu. SMS also worked with many films under Jupiter Pictures banner and a favorite of M. G. Ramachandran. 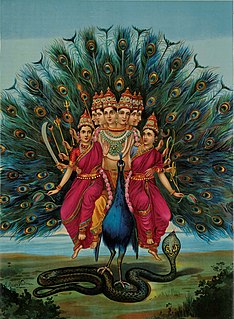 Radha and Jayalakshmi, popularly known as Radha Jayalakshmi, were an Indian Carnatic music vocalist duo as well as playback singers in films in the 1940s and 1950s. They later became teachers and trained notable Carnatic music singers. Jayalakshmi was the playback singer of the duo, but was credited as Radha Jayalakshmi in the cine field. Radha was her cousin and singing partner on stage performances. They were early vocalists in the duo singing trend in Carnatic music which started in the 1950s and includes performers like Bombay Sisters and Soolamangalam Sisters. In recent times, the trend has been continued by popular Carnatic music singers like Priya Sisters, their disciples, and Ranjani Gayatri. 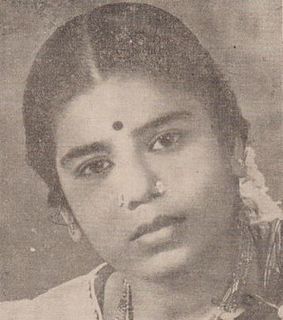 A. L. Raghavan was an Indian playback singer, who sang many songs in Tamil-language films.

Viswanathan–Ramamoorthy were an Indian music-director duo composed of M. S. Viswanathan and T. K. Ramamoorthy. They worked together on over 100 films, from 1952's Panam to 1965's Aayirathil Oruvan. After their split, Ramamoorthy worked on 16 films between 1966 and 1986. He and Viswanathan reunited in 1995 for Engirundho Vandhan. 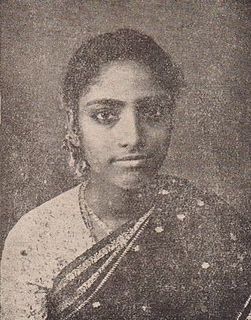 A. G. Rathnamala was an Indian stage drama artist and playback singer who has recorded over 500 songs in Tamil, Telugu, Malayalam and Kannada language films.

Kurichchi Marimuthu Balasubramaniam better known as Ku. Ma. Balasubramaniam was an Indian writer and Poet who wrote mainly in the Tamil language. He was a popular Tamil film lyricist and have penned about 170 songs in about 54 Tamil-language films. He was popularly referred to as Ku. Ma. Paa. 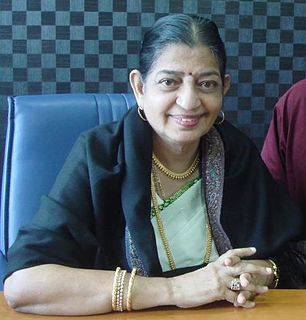 This is the Tamil discography of veteran Indian Female playback singer P. Susheela, who sang in over 6000 songs in Tamil. She gave her voice to actress and thespians in the Tamil Film Industry such as Padmini, B. Saroja Devi, Jayalalitha.