Tillman was an All-American running back for the University of Oklahoma (1983–86) and was the captain of the 1985 National Championship team when it defeated Penn State, 25–10, in the Orange Bowl.

Tillman was drafted in the 1987 NFL Draft by the Houston Oilers as the 133rd overall pick in the 5th round. He played for the Oilers for two seasons (1987–88). Before an Oilers home game in October 1987, Tillman was riding in a Houston taxi cab when the driver was stricken and became unconscious. Tillman, who was sitting in the front seat, was able to stop the vehicle and administer CPR; after the driver was taken to the hospital for recovery, Tillman played in a 37-33 comeback win against the Atlanta Falcons. [1] [2]

In the 1989 off-season, Tillman was traded to the San Francisco 49ers where he played for three seasons (1989–91). He was co-captain with Joe Montana and Ronnie Lott as part of the 49ers roster at Super Bowl XXIV when they defeated the AFC champion Denver Broncos.

Return to the Oilers

After being drafted by the Houston Oilers in 1987, Tillman worked as an anchor and reporter at KPRC-TV during the seven-month off-season. His football and broadcasting careers developed in tandem as he hosted two radio sports-talk shows and was a reporter and anchor for a radio PM magazine in Oklahoma City prior to his television jobs.

Tillman has also served for four years as a reporter for the Network's NCAA tournament coverage and is an anchor for regional broadcasts on Fox Sports Networks. He also served as host of DirecTV's "NFL Sunday Ticket."

Tillman began duties as the voice of KGOW 1560 The Game, a Houston sports talk radio station, when the station launched its new format in August 2007. His role includes reading promotional copy for the station, as well as weekly on-air time during the football season.

Tillman is a current co-host of KTRK's Houston Texans Inside the Game, a thirty-minute weekly post-game recap and analysis program that typically follows the station's local newscast on game days.

Tillman currently lives in Sugar Land, Texas, along with his wife, Rita, and their four daughters (Alisa, Blair, Mir, and Bailey). 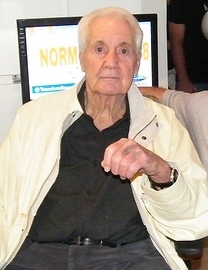 George Allen "Pat" Summerall was an American football player and television sportscaster who worked for CBS, Fox, and ESPN. In addition to football, he announced major golf and tennis events. Summerall announced 16 Super Bowls on network television, 26 Masters Tournaments, and 21 US Opens. He contributed to 10 Super Bowl broadcasts on CBS Radio as a pregame host or analyst.

KPRC-TV, virtual channel 2, is an NBC-affiliated television station licensed to Houston, Texas, United States. The station is owned by the Chicago-based Graham Media Group subsidiary of the Graham Holdings Company. KPRC's studios are located on Southwest Freeway (I-69) in the Southwest Management District, and its transmitter is located near Missouri City, in unincorporated northeastern Fort Bend County. Houston is the second-largest television market where the NBC station is not owned and operated by the network.

NFL on Fox is the branding used for broadcasts of National Football League (NFL) games produced by Fox Sports and televised on the Fox broadcast network. Game coverage is usually preceded by Fox NFL Kickoff and Fox NFL Sunday and is followed on most weeks by The OT. The latter two shows feature the same studio hosts and analysts for both programs, who also contribute to the former. In weeks when Fox airs a doubleheader, the late broadcast airs under the brand America's Game of the Week. 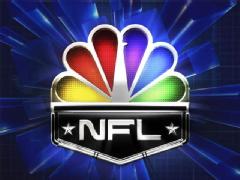 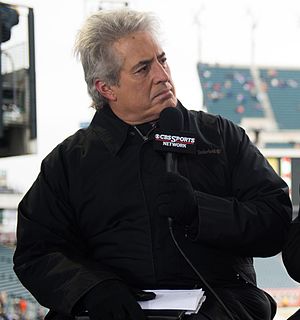 Randall Laureat Cross is an American football analyst and former player. He was a right guard and center in the National Football League (NFL). He played college football for the UCLA Bruins and was inducted into the College Football Hall of Fame in 2011. 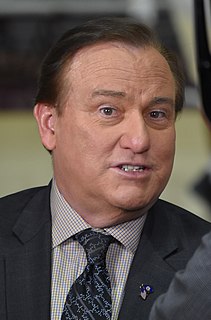 Tim Brando is an American sportscaster with CBS Sports and Fox Sports. Formerly with Raycom Sports, ESPN and SiriusXM, Brando has primarily covered NCAA football, basketball and the NBA. Along with radio duties, Brando has also served as a studio host for games, a play-by-play announcer, and halftime host.

Solomon Wilcots is a former American football free safety in the NFL, a current national television analyst and broadcaster as well as a head coach in Your Call Football. Wilcots played six seasons in the league for the Cincinnati Bengals, Minnesota Vikings and Pittsburgh Steelers.

College Football on CBS Sports is the branding used for broadcasts of college football games that are produced by CBS Sports, for CBS and CBS Sports Network

The 2003 Cleveland Browns season was the franchise's 55th season as a professional sports franchise and its 51st season as a member of the National Football League. The Browns were unable to replicate the success from the previous season, and they ended up winning only five games. They failed to return to the playoffs. This season would begin a stretch, which was unbroken until the 2020 season, in which the Browns would not make it to the NFL Playoffs in any capacity.

The 1984 San Francisco 49ers season was their 39th season in the National Football League. The season was highlighted by their second Super Bowl victory. The franchise had their best season ever with a record of 15 wins and only 1 loss. Quarterback Joe Montana would be awarded the Super Bowl's Most Valuable Player Award for the second time in his career, joining Bart Starr and Terry Bradshaw as the only two-time Super Bowl MVPs.

Fox College Football is the branding used for broadcasts of NCAA Division I FBS college football games produced by Fox Sports, and broadcast primarily by Fox, FS1, and FS2.

Andrew David Siciliano is an American sports television anchor, reporter and radio broadcaster. He is the play-by-play voice announcer for the NFL’s Los Angeles Rams. He is also currently the sole host of NFL Sunday Ticket Red Zone, airing on DirecTV's Red Zone Channel. He has held this position since 2005. He also serves as a host for NFL Total Access on the NFL Network. He has also hosted coverage of the Olympic Games in 2014 and 2016 for NBC Sports's coverage, mainly for the online-only events network "Gold Zone", which features a format which is equivalent to that of Red Zone.

The 1987 Orange Bowl was the 53rd edition of the college football bowl game, played at the Orange Bowl in Miami, Florida, on Thursday, January 1. Part of the 1986–87 bowl game season, it matched the ninth-ranked Arkansas Razorbacks of the Southwest Conference (SWC) and the #3 Oklahoma Sooners of the Big Eight Conference. Heavily-favored Oklahoma won 42–8.

The 2020 Oklahoma Sooners football team represented the University of Oklahoma during the 2020 NCAA Division I FBS football season, the 126th season for the Oklahoma Sooners. The team was led by Lincoln Riley, in his fourth year as head coach. They played their home games at Gaylord Family Oklahoma Memorial Stadium in Norman, Oklahoma. They are a charter member of the Big 12 Conference.