Star of the Circus

Star of the Circus is a 1938 British drama film directed by Albert de Courville and starring Otto Kruger, Gertrude Michael and John Clements. It is a remake of the 1937 German circus film Truxa , itself based on a novel by Heinrich Seiler. It was made at Elstree Studios. [1]

Knock on Wood is a 1954 American comedy film starring Danny Kaye and Mai Zetterling. Other actors in the film include Torin Thatcher, David Burns, and Leon Askin. The film was written and directed by Melvin Frank and Norman Panama, with songs by Kaye's wife, Sylvia Fine. 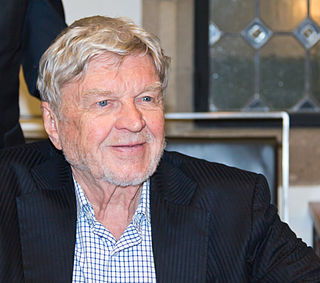 Hardy Krüger was a German actor and author, who appeared in more than 60 films from 1944 onwards. After becoming a film star in Germany in the 1950s, Krüger increasingly turned to roles in international films such as Hatari!, The Flight of the Phoenix, The Wild Geese, Sundays and Cybele, A Bridge Too Far, The Battle of Neretva, The Secret of Santa Vittoria, The Red Tent, The One That Got Away, and Barry Lyndon. 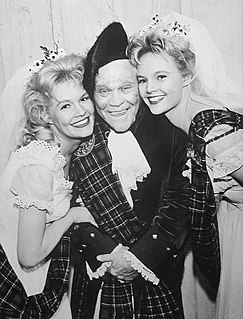 The Men in Her Life is a 1941 period drama film directed by Gregory Ratoff and starring Loretta Young, Conrad Veidt and Dean Jagger. It is an adaptation of the 1932 novel Ballerina by the British writer Eleanor Smith. It was nominated for the 1941 Academy Award for Best Sound Recording, but lost to That Hamilton Woman. The sets were designed by the Russian-born art director Nicolai Remisoff.

Corregidor is a 1943 American war film directed by William Nigh and starring Otto Kruger, Elissa Landi and Donald Woods. The film is set in December 1941 through May 1942 during the Japanese invasion of the Philippines. Corregidor opens with the following written dedication: "Dedicated to the heroes of the United States and Philippine Armed Forces, and the American Red Cross." The film closes with a poem about Corregidor written and narrated by English poet Alfred Noyes.

Housemaster is a 1938 British comedy drama film directed by Herbert Brenon and starring Otto Kruger, Diana Churchill and Phillips Holmes. It was made by ABPC at its Elstree Studios. When three young women come to stay at an elite public school, they cause disruption amongst the male students and teachers. It was based on the 1936 play of the same name by Ian Hay.

Truxa is a 1937 German drama film directed by Hans H. Zerlett and starring La Jana, Hannes Stelzer, and Ernst Fritz Fürbringer. It is a Circus film, based on a novel by Heinrich Seiler. The film was released in the United States and was one of the most successful German films show in America that year.

Leo Leux was a German composer of film scores. He began working on films during the Weimar Republic, following the introduction of sound films. During the Nazi era, Leux worked largely on entertainment films such as Truxa (1937) as well more ideogically-oriented films such as Venus on Trial (1941). He continued to work in cinema following World War II, right up to his death in 1951.

The Crime Doctor is a 1934 American crime drama directed by John Robertson from a screenplay by Jane Murfin, adapted from the novel The Big Bow Mystery by Israel Zangwill. The film stars Otto Kruger, Karen Morley, and Nils Asther. RKO Radio Pictures produced and distributed the film which was released on April 27, 1934. 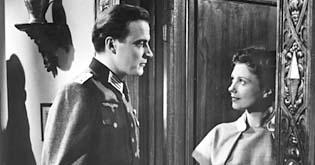 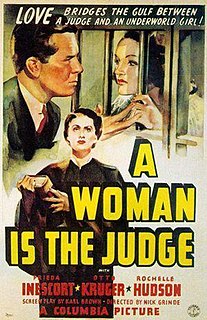 A Woman Is the Judge is an American 1939 drama film directed by Nick Grinde and starring Frieda Inescort, Otto Kruger, Rochelle Hudson, Mayo Methot, Gordon Oliver, and Arthur Loft. The film tagline is Love bridges the gulf between a judge and an underworld girl. This is an early film explorong such themes as gender equality and female lawyers. The film is based on the play by Alexandre Bisson.