A statue of Johannes Gutenberg is installed on the Stanford University campus in Stanford, California, United States. 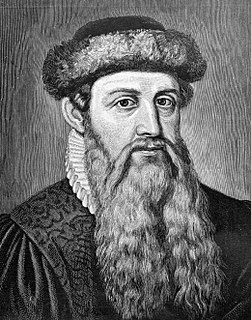 Johannes Gensfleisch zur Laden zum Gutenberg was a German blacksmith, goldsmith, inventor, printer, and publisher who introduced printing to Europe with the printing press. His introduction of mechanical movable type printing to Europe started the Printing Revolution and is regarded as a milestone of the second millennium, ushering in the modern period of human history. It played a key role in the development of the Renaissance, Reformation, the Age of Enlightenment, and the scientific revolution and laid the material basis for the modern knowledge-based economy and the spread of learning to the masses.

Stanford is a census-designated place (CDP) in the northwest corner of Santa Clara County, California, United States and is the home of Stanford University. The population was 13,809 at the 2010 census, with a daily population of 35,000.

The original marble by Italian sculptor Antonio Frilli was removed in 1949, along with another by Frilli depicting Benjamin Franklin. The two statues were replaced by new sculptures by Palo Alto artist Oleg Lobykin in 2013. The statues of Franklin and Gutenberg were installed on perches on the exterior of Wallenberg Hall. [1] 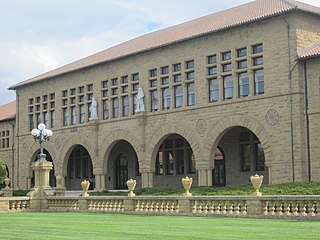 A statue of Benjamin Franklin is installed on the Stanford University campus in Stanford, California, United States. 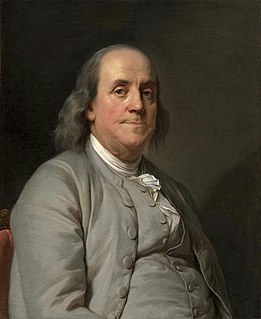 Benjamin Franklin was an American polymath and one of the Founding Fathers of the United States. Franklin was a leading author, printer, political theorist, politician, Freemason, postmaster, scientist, inventor, humorist, civic activist, statesman, and diplomat. As a scientist, he was a major figure in the American Enlightenment and the history of physics for his discoveries and theories regarding electricity. As an inventor, he is known for the lightning rod, bifocals, and the Franklin stove, among other inventions. He founded many civic organizations, including the Library Company, Philadelphia's first fire department and the University of Pennsylvania.

Les Bourgeois de Calais is a sculpture by Auguste Rodin, one of his best known, that exists in twelve original castings, and numerous copies. It commemorates an event during the Hundred Years' War, when Calais, a French port on the English Channel, was under siege by the English for about eleven months. Calais commissioned Rodin to create the sculpture in 1884 and the work was completed in 1889.

The Benjamin Franklin National Memorial, located in the rotunda of The Franklin Institute science museum in Philadelphia, Pennsylvania, U.S., features a colossal statue of a seated Benjamin Franklin, American writer, inventor, and statesman. The 20-foot (6.1 m)-tall memorial, was sculpted by James Earle Fraser between 1906 and 1911 and dedicated in 1938. With a weight of 30 short tons (27 t) the statue rests on a 92-short-ton (83 t) pedestal of white Seravezza marble. It is the focal piece of the Memorial Hall of the Franklin Institute, which was designed by John Windrim and modeled after the Roman Pantheon. The statue and Memorial Hall were designated as the Benjamin Franklin National Memorial in 1972. It is the primary location memorializing Benjamin Franklin in the U.S.

Benjamin Franklin is a bronze sculpture of a seated Franklin by John J. Boyle at the University of Pennsylvania in Philadelphia, Pennsylvania. It is located in front of College Hall, on Locust Walk, between 34th and 36th Streets, and is one of three statues of Franklin on the campus. 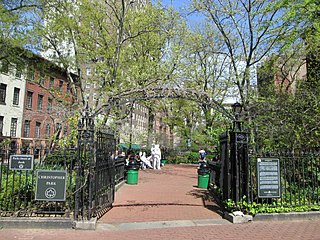 The Gay Liberation Monument is a monument featuring the sculpture Gay Liberation by American artist George Segal, located in Christopher Park along Christopher Street in the West Village section of Manhattan, New York. Located at the northern end of the park, the art installation commemorates the Stonewall riots and features four figures positioned in "natural, easy" poses. The bronze statues are covered in white lacquer, cast in 1980 from plaster moulds of human models. Two "World's Fair-style" benches and a plaque are also part of the monument. The monument was dedicated on June 23, 1992, and is part of the Stonewall National Monument.

The Main Quadrangle, or more commonly Main Quad or simply Quad, is the heart and oldest part of Stanford University in California. The collection of connected buildings was started in 1887 and completed in 1906. The Quad was damaged in the 1906 earthquake, repaired, less severely damaged in an 1989 earthquake, and repaired again. The exteriors have remained almost the same since the beginning, though the interiors of most of the buildings have changed radically. The Main Quad is still used for its original purposes of teaching, research, and administration. 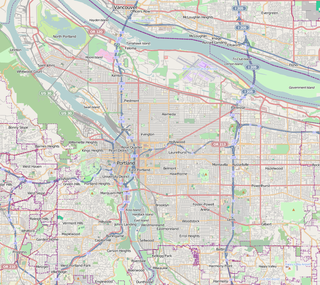 Benjamin Franklin is an outdoor 1942 sculpture depicting the Founding Father of the same name by George Berry, installed outside Franklin High School, in Portland, Oregon's South Tabor neighborhood, in the United States.

Sarah Winnemucca is a bronze sculpture depicting the Northern Paiute author, activist and educator by Benjamin Victor, installed in the United States Capitol Visitor Center's Emancipation Hall, in Washington, D.C., as part of the National Statuary Hall Collection. The statues was gifted by the U.S. state of Nevada in 2005.

A statue of Alexander von Humboldt is installed on the exterior of Jordan Hall, in Stanford University's Main Quad, in the U.S. state of California.

A statue of Louis Agassiz is installed on the exterior of Jordan Hall, in Stanford University's Main Quad, in the U.S. state of California. 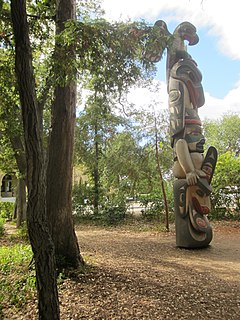 Boo-Qwilla is a totem pole created by Art Thompson, installed on the Stanford University campus in Stanford, California, United States. The sculpture was installed in Dohrmann Grove, near Hoover Tower, in 1995. It was cleaned and repainted in 2013.

The Stanford Legacy is a totem pole by artist Don Yeomans, installed on the Stanford University campus in Stanford, California, United States. The 40-foot (12 m), 4,200-pound artwork was installed outside the Law School on May 6, 2002. It exhibits a traditional Haida style and was carved from an approximately 400-year-old Western red cedar. The totem was cleaned and repainted in 2013. 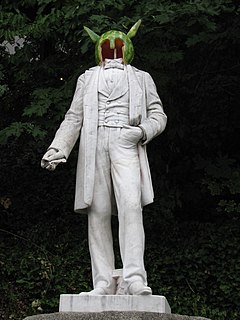 Abraham Lincoln is a 1915 marble sculpture depicting the American president of the same name by Antonio Frilli, installed in Ashland, Oregon's Lithia Park, in the United States. The statue was gifted to the city by Gwin S. Butler, who dedicated the artwork as a memorial to his stepfather, pioneer Jacob Thompson, in 1916.