Suburgatory is an American television sitcom created by Emily Kapnek that aired on ABC from September 28, 2011, to May 14, 2014. The series originally aired on Wednesday nights at 8:30/7:30 Central following The Middle . [1] The title is a portmanteau, devised by former CNN Senior Producer Linda Keenan, of the words "suburban" and "purgatory". On May 9, 2014, Suburgatory was canceled by ABC after three seasons. [2]

The series follows George Altman, a single father who decides to get away from New York City to the suburbs so he can give his teenage daughter, Tessa, a better life. However, their move to the suburbs has his daughter wondering if they just entered the world of The Stepford Wives after they see how eerily perfect their new locale is, right down to the neighbors who welcome them into their cul-de-sac.

The series first appeared on ABC's development slate in October 2010. [4] On January 14, 2011, ABC placed a pilot order, written by Emily Kapnek and directed by Michael Fresco, who also served as executive producers. [5] [6] The half-hour comedy was produced by Warner Bros. Television.

Casting announcements began in February 2011, with Jane Levy the first actor cast, playing the role of Tessa Altman, a Manhattan teen who has been raised for the last fifteen years by a single father, George. Tessa dreads the idea of living in the suburbs. [7] Next to join the series was Alan Tudyk in the role of Noah Werner, George's college buddy and a dentist who moved to the suburbs some years earlier. [8] Allie Grant then joined the series as Lisa Shay, a socially awkward girl at school who befriends Tessa. [9] Jeremy Sisto and Carly Chaikin followed with Sisto playing George Altman, Tessa's architect father who moves her from Manhattan to the suburbs, and Chaikin playing Dalia Royce, Tessa's neighbor who quickly becomes her nemesis at school. [10] Cheryl Hines was next cast in the role of Dallas Royce, a well-to-do housewife and the mother of Dalia. She tells George that her absentee husband (Jay Mohr) "travels a lot". [11] Rex Lee was the last actor cast, playing Mr. Wolfe, Tessa's clueless high school guidance counselor. He was originally a guest star but was upped to a series regular after the pilot. [12] Saturday Night Live (SNL) alumna Ana Gasteyer plays the Altmans' domineering neighbor, Sheila Shay, whom they vainly try to avoid. Fellow SNL alum Chris Parnell plays Fred, her husband, who toes the line. The Shays have two children: Lisa, who is Tessa's closest thing to a friend, and Ryan (Parker Young).

On May 13, 2011, ABC ordered the pilot to series, to air in the fall of the 2011–12 United States network television schedule. [13] [14] Suburgatory premiered on September 28, 2011 and aired on Wednesday nights at 8:30/7:30 central following The Middle . [15] After initially ordering 11 episodes, ABC picked up Suburgatory for a full season on October 13, 2011. [16] On December 16, 2011, it was announced that Alicia Silverstone would have a recurring role as Eden, a potential love interest for single father George. This marked the third time Silverstone and Jeremy Sisto had worked together, since first working on the 1995 American comedy film Clueless , and the 1995 thriller Hideaway . [17] [18] [19]

On March 23, 2012, ABC announced that the series was renewed for the 2012–2013 television season. [20] It would air after Modern Family , on 9:30/8:30 central timeslot replacing the new series The Neighbors which was originally scheduled to air in that timeslot. [21]

The theme song, "Pleasant Nightmare", was written by Jared Faber and Emily Kapnek and is sung by Alih Jey. [22] The theme song is slightly different in episode 22 (the last episode of season 1). In the season 2 premiere, Tessa performs a longer version of the song, which she says her mother wrote. George performs the song for Dalia as the season 2 finale ends.

The series takes place in the fictional town of Chatswin. [23] The onscreen map animation displayed in the opening credits zooms in on the affluent New York City suburbs of southern Westchester County as the geographic location of "Chatswin". The Westchester County 914 area code is also referenced in the show. The use of the 10805 postal code of the New Rochelle community, as the Chatswin postal code of main character George Altman signifies it as being the fictional town's true location.

The series takes its title from Suburgatory: Twisted Tales from Darkest Suburbia, a book by former CNN Senior Producer Linda Keenan, based in part on her experiences after she moved from New York City to three affluent suburbs, the first of which was in Westchester County. The book, released on October 11, 2011, thirteen days after the show premiered, is described on the front cover as "The Title behind the ABC Sitcom". [24]

Suburgatory attracted generally positive reviews. The first season holds an 88% "Certified Fresh" rating on Rotten Tomatoes, an average rating of 7/10, sampled from reviews from 24 critics. Its consensus reads: "Suburban satires are nothing new, but Suburgatory offers enough abrasive wit and left-field jokes to keep it fresh." [25] Metacritic gives the first season an initial score of 71 out of 100, calculated from reviews from 25 critics, implying "generally favorable reviews". [26] On Rotten Tomatoes, the second season holds a score of 89%, which is an average score of 7.9/10, based from nine reviews. [27]

"Kapnek manages to make a show that is both satiric and emotionally engaging", said David Wiegand of the San Francisco Chronicle , "two varieties of comedy [that] don't always work well together." [28] On the other end, Neil Genzlinger of The New York Times blasted the show. "[It] begins with a tenuous premise, uses it to leap to an inaccurate dichotomy and supports that with tired, unfunny stereotypes." [29]

Carly Chaikin received overwhelming critical praise for her role as Dalia Royce[ by whom? ]. Critics consistently referred to her as the series breakout star and she was arguably one of the most popular characters in the show.[ citation needed ] For her performance, Chaikin was nominated for the Critics' Choice Television Award for Best Supporting Actress in a Comedy Series, a Teen Choice Award for Choice TV Villain and many other various nominations for her role in Suburgatory, but fell short of winning any of them.

Suburgatory was nominated for a 2012 People's Choice Award for "Favorite New TV Comedy", but lost to 2 Broke Girls , another show from Warner Bros. Television.

Jeremy Merton Sisto is an American actor, producer, and writer. Sisto had recurring roles as Billy Chenowith in HBO's Six Feet Under and as Detective Cyrus Lupo in NBC's Law & Order. He also starred in the comedy Clueless (1995), the biblical television film Jesus (1999), the drama Thirteen (2003), and the horror film Wrong Turn (2003). In 2004, he portrayed bigoted baseball player Shane Mungitt in Take Me Out, for which he was nominated for a Los Angeles Drama Critics Circle Award for Featured Performance in a Play. In 2006, Sisto starred in Festen on Broadway.

The Middle is an American sitcom about a lower middle class family living in Indiana and facing the day-to-day struggles of home life, work, and raising children. The series premiered on September 30, 2009, on the ABC network, and concluded on May 22, 2018. The series features Everybody Loves Raymond actress Patricia Heaton and Scrubs actor Neil Flynn. The Middle was created by former Roseanne and Murphy Brown writers Eileen Heisler and DeAnn Heline of Blackie and Blondie Productions. The show is produced by Warner Bros. Television and Blackie and Blondie Productions. The Middle was praised by television critics and earned numerous award nominations.

Carly Hannah Chaikin is an American actress. Her acting career began in 2009 and she received her breakout role two years later, co-starring as Dalia Royce in the ABC sitcom Suburgatory. She played the role until the series' cancellation in 2014, and one year later began playing the role of Darlene in the USA Network television drama Mr. Robot.

The second season of the comedy television series, Modern Family premiered September 22, 2010, and ended on May 25, 2011, on the American Broadcasting Company in the United States. The series is produced by Lloyd-Levitan Productions in association with 20th Century Fox Television, with creators Steven Levitan and Christopher Lloyd as show runners. On January 12, 2010, Modern Family was renewed for a second season by ABC. Season two of Modern Family aired Wednesdays in the United States at 9 p.m. and consisted of 24 episodes.

The third season of the comedy television series, Modern Family premiered September 21, 2011 and ended on May 23, 2012 on the American Broadcasting Company in the United States. Modern Family was officially renewed for a third season on January 10, 2011. The series airs at 9:00 pm ET on Wednesday on ABC and is produced by Lloyd-Levitan Productions in association with 20th Century Fox Television, with creators Steven Levitan and Christopher Lloyd as show runners.

Revenge is an American drama television series created by Mike Kelley and starring Madeleine Stowe and Emily VanCamp, which debuted on September 21, 2011, on ABC. The plot is inspired by Alexandre Dumas' 1844 novel The Count of Monte Cristo. During its first season, it aired on Wednesdays at 10:00 pm (Eastern), and later airing on Sundays at 9:00 pm for seasons two through four. 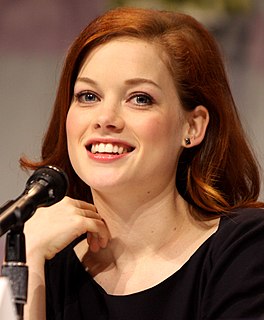 Jane Colburn Levy is an American actress. She rose to prominence portraying the lead role on the television series Suburgatory before earning further recognition for her roles in Evil Dead and Don't Breathe, both directed by Fede Álvarez. 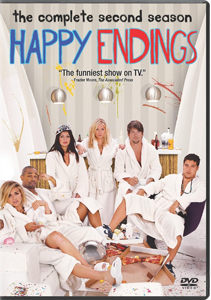 The second season of Happy Endings, an American television series. ABC officially renewed Happy Endings for a second season on May 13, 2011. It was later announced it would move to a new time-slot on Wednesdays at 9:30pm, as a lead-in to new series Revenge. It premiered on September 28, 2011.

Guys with Kids is an American sitcom television series that aired on NBC, from September 11, 2012 to February 27, 2013, as part of the 2012–13 television schedule. The series was created by Jimmy Fallon and Charlie Grandy and starred Anthony Anderson, Jesse Bradford, Zach Cregger, Jamie-Lynn Sigler, Erinn Hayes, and Tempestt Bledsoe. The series chronicles the lives of three friends, and their respective partners, as they raise their children in a modern environment. 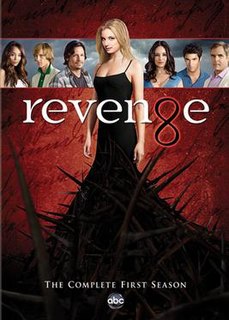 The first season of the ABC American television drama series Revenge premiered on September 21, 2011 and concluded on May 23, 2012, with a total of 22 episodes. The series was created by Mike Kelley and is inspired by the Alexandre Dumas novel The Count of Monte Cristo. The series stars Madeleine Stowe and Emily VanCamp.

How to Live with Your Parents is an American single-camera sitcom created by Claudia Lonow that aired on ABC from April 3 to June 26, 2013. The series was produced by 20th Century Fox Television and stars Sarah Chalke as Polly who—along with her daughter—ends up moving into her parents' house because of the financial crisis and her divorce.

The fourth season of the television comedy series The Middle began airing on September 26, 2012 on ABC in the United States. It is produced by Blackie and Blondie Productions and Warner Bros. Television with series creators DeAnn Heline and Eileen Heisler as executive producers. 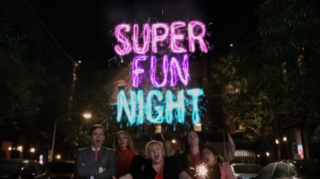 Super Fun Night is an American sitcom that aired from October 2, 2013, to February 19, 2014, on ABC. The series was broadcast during the 2013–14 television season on ABC in the Wednesday night 9:30 pm (ET/PT) slot after Modern Family. The series starred and was created by Rebel Wilson; it was green-lit by ABC for a series order pick-up on May 10, 2013.

Mixology is an American sitcom that aired during the 2013–14 television season on ABC. The series was co-created by Jon Lucas and Scott Moore, who also serve as co-executive producers with Ryan Seacrest and Nina Wass for Ryan Seacrest Productions and ABC Studios. The series was green-lit by ABC for a series order pick up on May 10, 2013.