The Mutiny were established in 1994 and were owned and operated by MLS throughout their existence. They were successful in their first years of play, winning the first MLS Supporters' Shield behind MLS MVP Carlos Valderrama and high-scoring forward Roy Lassiter, whose 27 goals in 1996 remained the MLS single-season record until 2018. However, in subsequent years, dropping attendance and revenues became problems, especially as their on-field success declined and the lease at their second home pitch of Raymond James Stadium removed sources of gameday revenues. Owing to these issues, MLS attempted without success to find a local ownership group to take over operations from the league, and both the Mutiny the league's other Florida-based team, the Miami Fusion, were folded before the 2002 season.

In 1994, newly established Major League Soccer announced it would place one of its charter franchises in the Tampa Bay Area. [1] The region was seen as a potentially fertile market for soccer due to the success of the Tampa Bay Rowdies in the old North American Soccer League in the 1970s and 1980s. [2] The Mutiny took the field in 1996 when the MLS began play. While the Mutiny had no direct connection to the Rowdies franchise, the Mutiny occasionally paid tribute to its predecessor by wearing green and gold alternative kits, once wearing both the Mutiny and Rowdies logos on the same shirt. [3]

The Mutiny were owned and operated by MLS along with two other teams, the Dallas Burn and the San Jose Clash, with the league hoping eventually sell the franchises to private local owners. [4] The team managed strong signings in 1995, including Carlos Valderrama, Roy Lassiter, and Martín Vásquez. [5] They were successful in their first two years, particularly in 1996, when they won the first Supporters' Shield with the best regular-season finish behind Most Valuable Player Carlos Valderrama and Golden Boot winner Roy Lassiter. [6]

On April 13, 1996, the Mutiny played their inaugural game against the New England Revolution, winning 3–2. Led by manager Thomas Rongen and Roy Lassiter, who scored a record 26 goals in the season, the Mutiny claimed the best record in the league at 20–12 and were the first winners of the Supporters' Shield. In the playoffs, they beat the Columbus Crew before losing in the conference final to eventual champions D.C. United. [7]

In 1997, Thomas Rongen took over the New England Revolution, and was replaced by John Kowalski. Under him, the Mutiny finished the season with a record of 17–15, but were swept in the playoffs by the Columbus Crew. After the season, Kowalski resigned from the club. 1998 saw Tim Hankinson join the club as the new manager while star player Carlos Valderrama joined new MLS side Miami Fusion. As a result, the Mutiny would struggle through the season, finishing with a record of 12–20, missing the playoffs for the first time. [7]

In 1999, the Mutiny reacquired Carlos Valderrama. Despite this, they struggled, being swept by the Columbus Crew in the first round of the playoffs, which they qualified for despite having a losing record. In the 2000 season, the Mutiny finished with a 16–12–4 record after rebounding from a poor start to the campaign. However, they were swept by the Los Angeles Galaxy in the first round of the playoffs. In 2001, Tim Hankinson was fired, but struggles continued with successors Alfonso Mondelo and Perry Van der Beck. Mondelo was fired midseason, and neither manager could revive the struggling franchise. On September 4, the Mutiny lost 2–1 to the Columbus Crew in what would be their last ever match. They managed just four wins and two draws, recording 21 losses over the course of the campaign. [7]

The city of Tampa demolished Tampa Stadium in 1998, and the Mutiny moved to new Raymond James Stadium for the 1999 season with a much less favorable lease. [8] The club was hampered by declining attendance and low revenues which were exacerbated by a lease agreement that transferred most match day revenue to the Tampa Bay Buccaneers, resulting in an inability to secure a local ownership group. [9] In 2001, the Mutiny had the worst record in MLS with only four wins in twenty-seven matches on the season and drew an average attendance of under 11,000 per game, among the league's lowest. [10] Faced with financial losses up to $2 million a year, MLS courted Malcolm Glazer and his family, owners of the Tampa Bay Buccaneers National Football League team, to purchase the Mutiny. The Glazers considered the deal but ultimately declined, leaving the league with no prospective owners willing to take over the team. MLS folded the Mutiny, as well as its other Florida-based team, the Miami Fusion, in 2002. [11] [2] The Glazers would purchase Manchester United in 2005.

Carlos Alberto Valderrama Palacio, also known as El Pibe, is a Colombian former professional footballer who played as an attacking midfielder. A creative playmaker, he is regarded as one of the best Colombian footballers of all time, and by some as Colombia's greatest player ever. His distinctive hairstyle, as well as his precise passing and technical skills made him one of South America's most recognisable footballers in the late 1980s and early 1990s. He won the South American Footballer of the Year award in 1987 and 1993, and in 1999, he was also named one of the top 100 players of the 20th century by World Soccer. In 2004, he was included in the FIFA 100, a list of the 125 "greatest living footballers" chosen by Pelé to celebrate the 100th anniversary of FIFA.

The Miami Fusion was a professional soccer team based in Fort Lauderdale, Florida. They played in Major League Soccer (MLS) for four seasons, from 1998 to 2001. Announced in 1997 as one of the league's first two expansion teams, their best season was 2001, when they won the Supporters' Shield with the best regular season finish. In 2002, after four years of lackluster ticket sales and revenues, MLS contracted the Fusion along with its other Florida-based team, the Tampa Bay Mutiny. The Fusion played their home games at Lockhart Stadium.

Roy Lee Lassiter is a retired American soccer striker. He played the first few years of his professional career in Costa Rica. He returned to the United States to play in Major League Soccer when that league was launched in 1996, and from 1996 to 1999 he was one of the most prolific goal scorers in MLS.

Thomas Eddy Rongen is a Dutch American football coach who has spent the majority of his playing and coaching career in the United States. In December 2016, he was named Chief Scout of the United States Men's National Team. Rongen won the MLS Coach of the Year award in MLS's inaugural season in 1996, leading the Tampa Bay Mutiny to the best regular-season record. 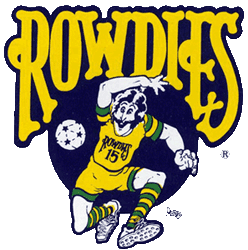 The Tampa Bay Rowdies were an American professional soccer team based in Tampa, Florida, that competed in the original North American Soccer League (NASL) from 1975 to 1984. They enjoyed broad popular support in the Tampa Bay area until the NASL folded in 1984, after which the team played in various minor indoor and outdoor leagues before finally folding on January 31, 1994. The Rowdies played nearly all of their outdoor home games at Tampa Stadium and nearly all of their indoor games at the Bayfront Center Arena in nearby St. Petersburg, Florida. Although San Diego played indoors until 1996, the Rowdies were the last surviving NASL franchise that played outdoor soccer on a regular basis.

Roy Wegerle is a former United States international soccer player who appeared for the national team 41 times between 1992 and 1998. Born and raised in South Africa, he was naturalized as a U.S. citizen in 1991. Since retiring from soccer he has become a professional golfer.

MLS Cup 1996 was the inaugural edition of the MLS Cup, the championship match of Major League Soccer (MLS), the top-level soccer league of the United States. Hosted at Foxboro Stadium in Foxborough, Massachusetts, on October 20, 1996, it was contested by D.C. United and the Los Angeles Galaxy to decide the champion of the 1996 season.

MLS Cup 1999 was the fourth edition of the MLS Cup, the championship match of Major League Soccer (MLS), which decided the champion of the 1999 season. It took place on November 21, 1999, at Foxboro Stadium in Foxborough, Massachusetts, and was contested by D.C. United and the Los Angeles Galaxy in a rematch of the inaugural final played at the same venue in 1996.

Perry Van der Beck is a retired American soccer midfielder, former coach and technical director, and the current Vice President of Competition and Operations for the United Soccer League.

The Tampa Bay Rowdies are an American professional soccer team based in St. Petersburg, Florida. The club was founded in 2008 and first took the pitch in 2010. Since 2017, the Rowdies have been members of the USL Championship in the second tier of the American soccer pyramid. They formerly played in USSF Division 2 and the North American Soccer League (NASL), which were also second-tier leagues. The Rowdies play their home games at Al Lang Stadium on St. Petersburg's downtown waterfront.

Farrukh Quraishi is a retired Iranian-born English footballer. He spent six seasons in the North American Soccer League playing for the Tampa Bay Rowdies and Calgary Boomers. Since retiring from playing, he has held numerous executive positions in U.S. soccer teams and organizations. Quraishi won the 1974 Hermann Trophy. Most recently he was the President and General Manager of the modern Tampa Bay Rowdies. 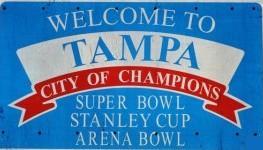 The Tampa Bay area is home to many sports teams and has a substantial history of sporting activity. Most of the region's professional sports franchises use the name "Tampa Bay", which is the name of a body of water, not of any city. This is to emphasize that they represent the wider metropolitan area and not a particular municipality and was a tradition started by Tampa's first major sports team, the original Tampa Bay Rowdies, when they were founded in 1975.

The 1996 D.C. United season was the teams debutant season in Major League Soccer (MLS), and 1996 was the inaugural year of play in MLS competition. United would become the first club to win the MLS Cup this year.

The History of D.C. United began in 1995 when Major League Soccer awarded a franchise to the Washington, D.C. metropolitan area. From 1996 to 2017, D.C. United played in RFK Stadium located in the city's seventh ward near the Eastland Gardens neighborhood and D.C. Armory, until moving to their current home Audi Field in 2018.

The 2001 Tampa Bay Mutiny season was the club's seventh year of existence, as well as their sixth season in Major League Soccer, and their sixth consecutive season in the top-flight of American soccer. It was also the Mutiny's last season, and the last season of pro soccer in Tampa Bay until 2010, when FC Tampa Bay joined the USSF Division 2 Professional League.

Since its creation in 1996, Major League Soccer, the highest level of professional soccer in the United States, has had three teams cease operations—the Tampa Bay Mutiny, the Miami Fusion, and Chivas USA. The two Florida-based teams ceased playing after the 2001 season as a result of the league's financial situation, and Chivas USA folded after the 2014 season with plans to rebrand and move to a stadium in downtown Los Angeles. All three situations involved league ownership of the clubs and executive decisions to maintain the viability and competitiveness of the league.

The 2015 season was the current Tampa Bay Rowdies sixth season of existence, and fifth playing in the North American Soccer League, the second tier of American soccer pyramid. Including the original Rowdies franchise and the Tampa Bay Mutiny, this was the 28th season of professional soccer in the Tampa Bay area.