The Adventures of the Black Stallion

The Adventures of the Black Stallion is a French New Zealand and Canadian-produced television series that starred Mickey Rooney and Richard Ian Cox, as a trainer and a teenaged horse racer and was loosely based on the book series by Walter Farley. [1] The series originally ran on The Family Channel and YTV from September 15, 1990 to May 16, 1993, before cancellation. It has since been shown in re-runs throughout the world. Mickey Rooney is the only original cast member from The Black Stallion to reprise his role in the show. In France, the show ran on M6 from April 20, 1991.

Most of the episodes are set around Canada. During the second and third season, the show moves away from the farm, and has many episodes set in New Zealand, Paris and the United States. The Adventures of The Black Stallion was filmed on location in British Columbia, Canada, as well as France and New Zealand. 16 horses portrayed The Black across the three countries. [2]

The show follows the life of fifteen-year-old horse racer Alec Ramsay (Richard Ian Cox), his wild stallion The Black, and their trainer Henry Dailey (Mickey Rooney). In the series, Alec's father died before the series start, leaving Alec and his mother to run Hopeful Farm. The show focuses both on life at Hopeful Farm and on the racing circuit. During the first season, most of the races are unprofessional circuit races and match races because The Black's an unpapered horse, meaning there is no proof of his lineage. During the second season, The Black's history is uncovered and Alec is able to obtain his papers, allowing him to be raced on the professional circuits around the world.

The series maintained that Alec was the only one who can ride The Black. [3] He is known for having a violent temper with anyone besides Alec, though he does allow some people around the farm to hold his halter and lead him around, most notably Henry. He only seems to do grudgingly, however, and tends to be far less tolerant of others if Alec isn't around to keep him under control. To help keep the high-strung horse calm at the track, the gelding Napoleon is frequently taken on the road with them.

When the show was first aired, many of the episodes were shown out of production order, especially during the first season.

Echo Bridge Entertainment released all three seasons on DVD in Region 1 in 2006, 2007, and 2008. These releases contain the episodes arranged in production order instead of air date.

Alliance Home Entertainment has released all three seasons on DVD in Canada. [7] [8] [9] 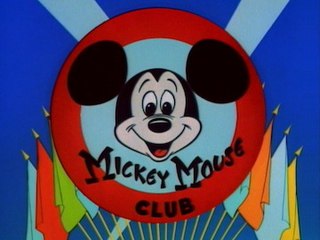 The Mickey Mouse Club is an American variety television show that aired intermittently from 1955 to 1996 and returned to social media in 2017. Created by Walt Disney and produced by Walt Disney Productions, the program was first televised for four seasons, from 1955 to 1959, by ABC. This original run featured a regular but ever-changing cast of mostly teen performers. ABC broadcast reruns weekday afternoons during the 1958–1959 season, airing right after American Bandstand. The show was revived three times after its initial 1955–1959 run on ABC, first from 1977 to 1979 for first-run syndication as The New Mickey Mouse Club, then from 1989 to 1996 as The All-New Mickey Mouse Club airing exclusively on cable television's The Disney Channel, and again in 2017 with the moniker Club Mickey Mouse airing exclusively on internet social media. It ended in 2018. 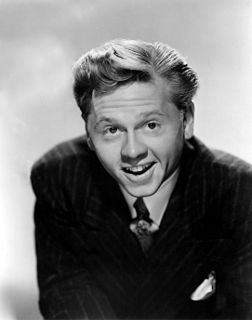 Mickey Rooney was an American actor, vaudevillian, comedian, radio personality, and producer. In a career spanning nine decades and continuing until shortly before his death, he appeared in more than 300 films and was among the last surviving stars of the silent film era. He was the top box-office attraction from 1939 to 1941, and one of the best-paid actors of that era. He won a Golden Globe Award in 1981 and an Emmy Award in 1982.

The Black Stallion is a 1979 American adventure film based on the 1941 classic children's novel of the same name by Walter Farley. The film starts in 1946, five years after the book was published. It tells the story of Alec Ramsey, who is shipwrecked on a deserted island with a wild Arabian stallion whom he befriends. After being rescued, they are set on entering a race challenging two champion horses.

Richard Ian Cox is a Welsh-born Canadian actor, voice actor, comedian and online radio host best known for his voice work for English language dubs of anime, mainly for InuYasha. Richard gained prominence for playing the character of Henry Dailey's teenaged traveller and horse rider, Alec Ramsay, in The Family Channel's Adventures of the Black Stallion during the early 1990s. Cox also gained fame for voicing Ian Kelley, the title character in the animated series Being Ian and for voicing Scattershot, one of the Autobots in the CGI-Animated series Transformers: Cybertron. In 2015, he provided the voice of Lofty in the American dubbed version of the 2015 reboot of the British children's animated television series Bob the Builder taking over from both Sonya Leite and Emma Tate. He maintains an active online presence on Tumblr and Twitter as well as Facebook. He hosts his own podcast called The Show.

Road to Avonlea is a Canadian television series first broadcast in Canada between January 7, 1990, and March 31, 1996, and in the United States starting on March 5, 1990. The program was created by Kevin Sullivan and produced by Sullivan Films in association with the Canadian Broadcasting Corporation (CBC) and the Disney Channel, with additional funding from Telefilm Canada. The Disney Channel began airing the series in the United States on March 5, 1990, and continued airing it in January 1997. The series was loosely adapted from a number of novels by Lucy Maud Montgomery, with many of the series' characters and episodes inspired by her stories.

Bob Hope Presents the Chrysler Theatre is an American anthology series, sponsored by Chrysler Corporation, which ran on NBC from 1963 through 1967. The show was hosted by Bob Hope, but it had a variety of formats, including musical, dramatic, and comedy.

Brad Wright is a Canadian television producer, screenwriter and actor. He is best known as the co-creator of the television series Stargate SG-1, Stargate Atlantis and Stargate Universe and as the creator of Travelers. He was born in Toronto, Ontario, Canada.

Guy Boyd is an American character actor. Boyd has starred in more than fifty films from the late 1970s to the present. He is probably best known for his role as Detective Jim McLean in Body Double (1984) and for the pivotal role of Frank Hackman on several episodes of Miami Vice.

The Black Stallion, known as the Black or Shêtân, is the title character from author Walter Farley's bestselling series about the Arab stallion and his young owner, Alec Ramsay. The series chronicles the story of a sheikh's prized stallion after he comes into Alec's possession, although later books furnish the Black's backstory. Shaytan is the Arabic word for "devil".

Babes in Arms is the 1939 American film version of the 1937 Broadway musical of the same title. Directed by Busby Berkeley, it stars Mickey Rooney and Judy Garland, and features Charles Winninger, Guy Kibbee, June Preisser, Grace Hayes, and Betty Jaynes. The film concerns a group of youngsters trying to put on a show to prove their vaudevillian parents wrong and make it to Broadway. The original Broadway script was significantly revamped, restructured, and rewritten to accommodate Hollywood's needs.

The Black Stallion Returns is a 1983 film adaptation of the book of the same name by Walter Farley, and is a sequel to The Black Stallion. It is the only film directed by Robert Dalva. It was produced by Francis Ford Coppola for MGM/UA Entertainment Company. The film stars Kelly Reno, Vincent Spano and Teri Garr. The portrayal of The Black was shared between Cass Ole, the horse from The Black Stallion, and El Mokhtar.

Family Classics is a Chicago television series which began in 1962 when Frazier Thomas was added to another program at WGN-TV. Thomas not only hosted classic films, but also selected the titles and personally edited them to remove those scenes which he thought were not fit for family viewing. After Thomas' death in 1985, Roy Leonard took over the program. The series continued sporadically until its initial cancellation in 2000. 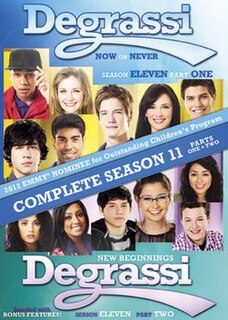 The eleventh season of Degrassi, a Canadian serial teen drama television series, premiered on July 18, 2011, concluded on May 18, 2012, and consists of 45 episodes. Although only two school years have passed in the story timeline since season six, part one of season eleven is set in the second term of the spring semester, while part two is set in the fall semester in the years it aired. Writers have been able to use a semi-floating timeline, so that the issues depicted are modern for their viewers. The first half of this season again depicts the lives of a group of high school sophomores, juniors, and seniors while the second half of this season depicts the lives of a group of high school freshmen, juniors, and seniors as they deal with some of the challenges and issues that teenagers face such as gang violence, parenthood, transphobia, homosexuality, drug use, dysfunctional families, mental disorders, adoption, organ transplantation, crime, bulimia, alcoholism, sex, drug abuse, and murder.

The third season of Adventure Time, an American animated television series created by Pendleton Ward, premiered on Cartoon Network on July 11, 2011 and concluded on February 13, 2012. The season was produced by Cartoon Network Studios and Frederator Studios. The season follows the adventures of Finn, a human boy, and his best friend and adoptive brother Jake, a dog with magical powers to change shape and size at will. Finn and Jake live in the post-apocalyptic Land of Ooo, where they interact with the other main characters of the show: Princess Bubblegum, The Ice King, Marceline the Vampire Queen, Lumpy Space Princess, and BMO.

Rapunzel's Tangled Adventure is an American animated television series developed by Chris Sonnenburg and Shane Prigmore, and produced by Disney Television Animation. It premiered on Disney Channel as a Disney Channel Original Movie titled Tangled: Before Ever After on March 10, 2017. Its regular episodes premiered on March 24, 2017. The series is based on the 2010 film Tangled and features the returning voices of Mandy Moore and Zachary Levi, alongside Eden Espinosa, Clancy Brown, Julie Bowen, James Monroe Iglehart, Jeff Ross, Paul F. Tompkins, and Jeremy Jordan.

Mickey Mouse Mixed-Up Adventures is an American computer-animated children's television series produced by Disney Television Animation. It is a spin-off of Mickey Mouse Clubhouse. The series debuted on Disney Junior in the United States on January 15, 2017.