First published on 28 February 1888, The Barrier Miner was published continuously until 25 November 1974. Copies are available on microfilm and online via Trove Digitised Newspapers. [1] The paper was revived briefly in 2005; an index to births deaths and marriages has been prepared which also notes additional publication dates between 16 December 2005 and 31 July 2008. [2] The paper closed down for a second time in 2008 with the managing director, Margaret McBride stating that "...due to commercial reasons the paper would no longer service Broken Hill and the region...". [3] The Barrier Miner served the growing mining community of Broken Hill, when the area was found to have lead ore and traces of silver. It was not until late 1884 or early 1885 that rich quantities of silver were found and the Broken Hill Proprietary Company (BHP) was floated to mine the leases. The newspaper was published by Henry Fenton, Augustus Sydney Knight and George Alfred Mills and was distributed to Broken Hill, Tibooburra, White Cliffs, Wilcannia, Menindee, Ivanhoe. It was edited by Samuel Prior from 1888, who was also a partner (with a one-seventh share) with the main proprietors in 1905, Knight and Von Rieben Ltd. who took over in about 1890 when Fenton and Mills sold their interests. Prior may have been one of the youngest editors of a daily newspaper in Australia. He later wrote the Wild Cats column at The Bulletin , where he was later appointed editor, and was its main proprietor when he died in 1933. [4]

E. R. Kellsall took over as editor after Prior left, with Mr R.D.S. Magnusson as sub-editor. The newspaper was originally published and printed from a building in Argent Street, occupying a galvanised iron clad shed. In 1908 a substantial stone building was erected by F.J. Fairweather and Sons on the corner of Blende and Sulphide Streets. [5]

Knight and Von Rieben retired in 1907 to Adelaide and Sydney respectively, when John Smethurst (a building contractor who erected the Broken Hill Town Hall) took over as managing editor, remained in charge up to 1933 when J. F. Williams took over. E. K. Lean, joined the staff in 1893 and became assistant manager in 1918. A Sunday evening special edition was published during the 1914-1918 war featuring letters from overseas soldiers with many eager residents rushing the office for copies as soon as they came off the presses. The newspaper office was twice bombed during World War I, it is believed because of some comments made about unpatriotic behaviour in the town, which was not taken well by the strong unionised workforce. Daily circulation reached 8303 in 1905, with three editions published up to about 1922 (at 1 p.m., 3:00-3:30 p.m. and 6:00-6:30 p.m.) the first and third editions being sold in Argent Street and the second edition being home delivered. [5]

James Davison (1848-1929) (managing editor of the Melbourne Herald ) took over the paper in 1919, along with the Port Pirie Recorder. He left in 1922 to start the Adelaide News (the paper that gave Murdoch's News Limited its start). Competition came in 1919 with the addition of the Barrier Daily Truth . [5]

The paper has been digitised as part of the Australian Newspapers Digitisation Program [6] project of the National Library of Australia. The microfilm copies are held in the collection of the State Library of New South Wales. [7]

The Queanbeyan Age is a weekly newspaper based in Queanbeyan, New South Wales, Australia. It has had a number of title changes throughout its publication history. First published on 15 September 1860 by John Gale and his brother, Peter Francis Gale, The Golden Age, as it was known at the time, was the first newspaper of the small township on the banks of the Queanbeyan River. It was named due to the short-lived Kiandra goldrush, which generated large amounts of gold-based traffic through the region. 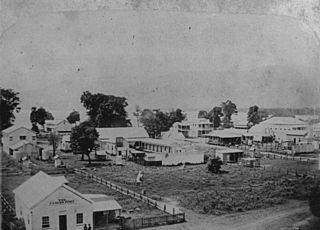 The Cairns Post is a major News Corporation newspaper in Far North Queensland, Australia, that exclusively serves the Cairns area. It has daily coverage on local, state, national and world news, plus a wide range of sections and liftouts covering health, beauty, cars and lifestyle. The Cairns Post is published every weekday and a weekend edition which is called The Weekend Post which is published on Saturdays.

The Barrier Daily Truth was a local newspaper for the mining town of Broken Hill in Australia.

The Sun was an Australian afternoon tabloid newspaper, first published under that name in 1910.

The Cumberland Argus and Fruitgrowers' Advocate was a newspaper published in Parramatta with coverage and circulation incorporating Greater Western Sydney and parts of North-West Sydney, Australia. First published on 24 September 1887, the paper continued under this title until issue No. 3397, on 15 March 1950, when the newspaper was officially renamed the Cumberland Argus. It remained under this banner for a further 12 years until it ceased publication on 24 October 1962. 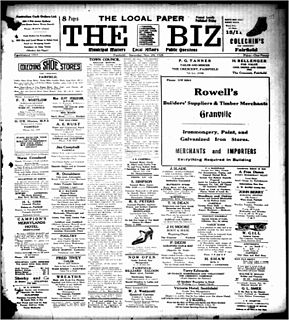 The Biz was a weekly English language tabloid newspaper published in Fairfield, New South Wales Australia. The paper was first published in 1917 by Albert Henry Johnson. For forty years the publishing house was located in Cabramatta, New South Wales, before being moved to Smart Street, Fairfield. It ceased publication in January 1980. The Biz was digitised in 2012. 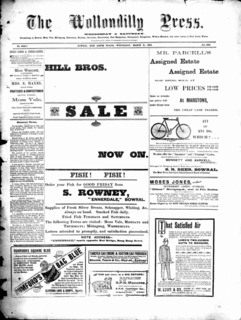 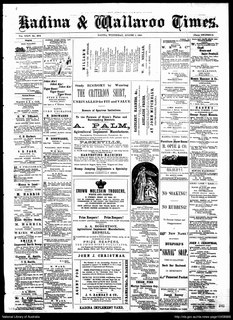 The Kadina and Wallaroo Times was a newspaper published in Kadina, and also serving the nearby Wallaroo, South Australia from August 1888 to August 1966. In 1968 the paper merged to form the Yorke Peninsula Country Times. 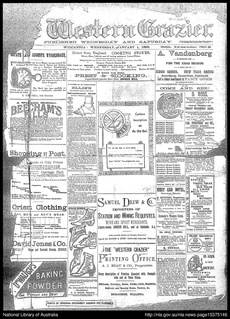 The Western Grazier was a newspaper published from 1880 until 1951, covering the central Darling River region of New South Wales. It was published in Wilcannia until 1940, when it moved to Broken Hill.

The Riverine Grazier is an English language newspaper published in Hay, New South Wales from 1873. The paper absorbed the Riverina Times, Hay Standard and Journal of Water Conservation in October 1902.

The Yass Tribune is an English-language newspaper published in Yass, New South Wales.