The current school was originally two grammar schools. The boys' school was founded in 1677 and the girls' school in 1877 through a charitable endowment by John Roan, Yeoman of Harriers to King Charles I, who left a substantial amount in his Will:

"to bring up so many poor town-born children of Greenwich at school, that is to reading, writing, and cyphering, and each of them forty shillings per annum towards their clothing until each of them shall accomplish the age of fifteen years. The said poor children shall wear on their upper garment the cognisance or crest of me, John Roan."

The stag's head badge – derived from John Roan's personal coat-of-arms – has been worn by Roan school children ever since. The first chairman of the governors of the school was Dr Thomas Plume, the vicar of Greenwich.

It became a comprehensive in 1983, when Roan Grammar School for Boys and Roan School for Girls merged with Charlton Boys School.

During the first decade of the 21st century, the local council proposed to relocate the school to the Greenwich Peninsula, but, facing growing local opposition, it eventually scrapped the plans. Critics among parents and local residents argued that the current sites were good, and that money should instead be invested to refurbish the current sites. The proposed site was also near to an old gasometer, which would need to be dismantled at considerable cost for safety reasons, and alongside the busy A102 Blackwall Tunnel southern approach road.

With relocation ruled out, the Westcombe Park buildings were demolished in the summer of 2012 prior to construction of replacement buildings (completed in 2014), and the Maze Hill site was refurbished and remodelled; both phases used funding originally granted when the school was due to move to the Peninsula.

The John Roan School was inspected by Ofsted in March 2018; the resulting report, published on 8 June 2018, rated the school "Inadequate" and said it had "serious weaknesses". [3] On 12 June 2018, the school was issued with an Academy Order. [4] The following day, parents and staff received a letter from the University Schools Trust [5] stating that the Regional Schools Commissioner had nominated UST to be the preferred sponsor. [6] Some parents organised protests, seeking to get the Ofsted report withdrawn and to halt the academisation process. [7] Teachers also organised a series of strikes (eight up to 7 November 2018) in protest at the academisation process; over 1,000 people signed a petition and 300 families raised concerns about UST finances and suitability with the school's chair of governors; but more than 100 signed a separate letter supporting the improvement plans and criticising the teachers' industrial action. [8] On 14 November, a Greenwich Council decision about academisation of John Roan was deferred to a meeting in December 2018. [9] On 30 August 2019, the academy plan was finally forced through, John Roan, the voluntary controlled school was closed and it was refactored as The John Roan School, a converter academy sponsored by the United Learning Trust. [10]

Since 1928 the school has been located east of Greenwich Park and south-east of Greenwich town centre, having moved there from Victorian purpose-built premises in Eastney Street (now Feathers Place).

The foundation stone of the Maze Hill buildings was laid by Sir George Hopwood Hume MP, local politician and chairman of London County Council, in 1926. The school had two opening ceremonies: one in 1927, by Herbert Fisher MP, and another following completion in 1928. [11]

The school's motto is "With honour and hard work" (Latin : Honore et labore).

The John Roan had four house teams, named after people of historic significance: Seacole, Da Vinci, Darwin and Stopes, named after Mary Seacole, Leonardo da Vinci, Charles Darwin and Marie Stopes. Two tutor groups per year were in the same house team. There were also house leaders and competitions amongst the four houses. The house system was scrapped in September 2017, and the colour ties now correspond to year group.[ citation needed ]

Langley Park School for Girls is a girls' secondary academy school in Beckenham in the London Borough of Bromley, England, with a mixed-sex sixth form. 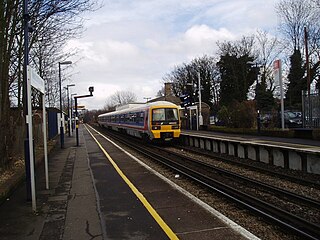 Westcombe Park station is in Greenwich, London, and is situated on the Greenwich Line connecting suburbs along the south side of the River Thames with central London stations.

Westcombe Park is a largely residential area in Blackheath in the Royal Borough of Greenwich, south-east London, England. It is bounded by the main London-Dartford railway line to the north, the Blackwall Tunnel southern approach to the east, the Blackheath common to the south and a road, Vanbrugh Hill, to the west.

Maze Hill is an area in Greenwich and Blackheath, in south-east London, lying to the east of Greenwich Park, and west of the Westcombe Park area of Blackheath. It is part of the Royal Borough of Greenwich, and takes its name from the main thoroughfare, Maze Hill. It gives its name to Maze Hill railway station. 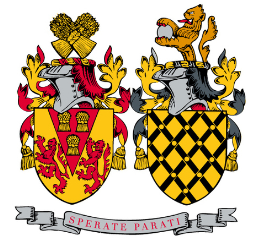 Watford Grammar School for Boys is a partially selective academy for boys in Watford in Hertfordshire, England. The school and its sister school, Watford Grammar School for Girls, descend from a Free School founded as a charity school for boys and girls by Elizabeth Fuller in 1704. Despite its name, the school accepts boys of all abilities, although approximately a third are selected for academic or musical aptitude, and brothers of existing pupils are also guaranteed places. Its results are among the highest achieved by non-grammar state schools in England.

Oxford Spires Academy is a state funded secondary school for children aged 11–18 in Glanville Road, East Oxford, England formerly known as Oxford Community School and The Oxford School. It is sponsored by the CfBT Education Trust.

Chatham Grammar School for Girls ("CGSG") is a girls grammar school with academy status and a mixed sixth form. In September 2017 it became a member school of the University of Kent Academies Trust (UKAT), joined with another secondary school, Brompton Academy.
Since 2019 it has described itself as Chatham Grammar School on its website and signage, reflecting the presence of boys on the sixth form roll.

Richmond Park Academy is a secondary school with an academy status in the London Borough of Richmond upon Thames. The school is part of the Academies Enterprise Trust Academy chain.

Retford Oaks Academy is a coeducational secondary school and sixth form located in the market town of Retford, Nottinghamshire, England, situated in the coal-mining district of Bassetlaw.

Newquay Tretherras is a secondary school with academy status in Newquay, Cornwall, England. The current headteacher is Samantha Fairbairn. The original school first opened on 7 January 1954.

The Elizabethan Academy is a secondary school with academy status located in the Nottinghamshire market town of Retford, England. It is situated to the north of Retford town centre, to the east of the A638, on the side of the River Idle once known as West Retford. The academy has specialist status in Science and Mathematics.

Vanbrugh Castle is a house designed and built by John Vanbrugh for his own family, located on Maze Hill on the eastern edge of Greenwich Park in London, to the north of Blackheath, with views to the west past the Old Royal Naval College at Greenwich down to the Thames reaching as far as the Houses of Parliament. 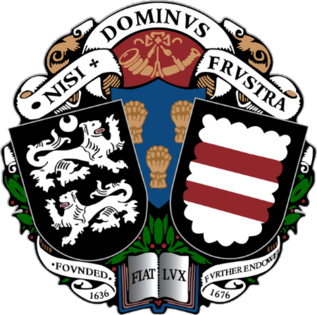 Calday Grange Grammar School is a non-denominational selective state-funded grammar school, founded in 1636, situated on Caldy Hill in the town of West Kirby on the Wirral peninsula, England. The school admits boys from age 11 to 18, and since 1985 girls for the sixth form only. The school has academy status, hosts the Wirral Able Children Centre, and has been awarded Sportsmark Gold and Investors in People status. 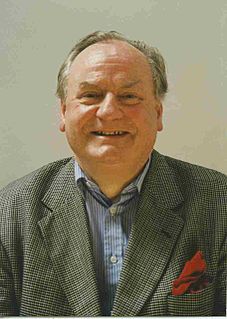 Neil Biron Rhind is an English journalist, writer and an authority on the social and historical development of Blackheath and surrounding areas of south east London.