The school is the third Hillsborough County high school to have an International Baccalaureate Programme, with the other IB schools being C. Leon King High School, Strawberry Crest High School, and Hillsborough High School (Tampa, Florida). The program was established in the 2006–2007 school year and offers a Pre-IB curriculum for grades 9 and 10, and an IB Diploma Programme for grades 11 and 12. Robinson received the status of a full-fledged IB diploma school for the 2008–2009 school year. The first class of IB students graduated in 2010.

Only 150 spots are open every year for Robinson High's IB program. Robinson High School also had the highest number of National Merit semi finalists in Hillsborough County in 2015. [3] 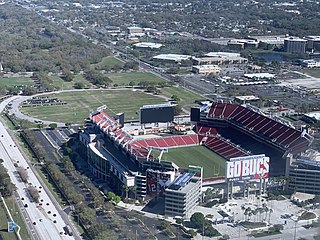 Raymond James Stadium, also known by the nicknames "Ray Jay" and "The New Sombrero", is a multi-purpose stadium located in Tampa, Florida. It is home to the Tampa Bay Buccaneers of the National Football League (NFL) as well as the NCAA's South Florida Bulls football team. The stadium seats 65,618, which can be expanded to about 75,000 for special events with the addition of temporary seating. It was built at public expense as a replacement for Tampa Stadium and opened in 1998, and it is known for the replica pirate ship located behind the stands in the north end zone.

C. Leon King High School is a Tampa, Florida public high school named in honor of C. Leon King, a member of the Hillsborough County Board of Public Instruction for 18 years. It opened in 1960 with 58 faculty members and 960 students. It is located at 6815 North 56th Street in Tampa, Florida 33610.

Deerfield Beach High School (DBHS) is a public high school in Deerfield Beach, Florida. It is part of the Broward School District and has an enrollment of approximately 2,400. 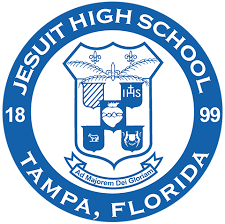 Jesuit High School is a private Catholic, all-male high school run by the U.S. Central and Southern Province of the Society of Jesus in Tampa, Florida. The school was established in 1899 by the Jesuits and operates independently of the Roman Catholic Diocese of Saint Petersburg. The school teaches a college preparatory curriculum and has been named a Blue Ribbon School of Excellence. 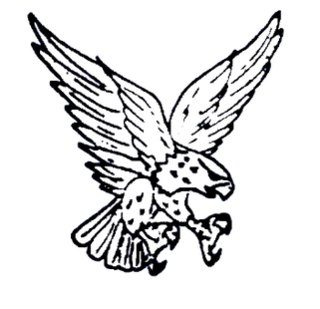 Armwood Senior High School, is a public high school located in Seffner, Florida, on U.S. Highway 92. It opened in August 1984. The school is named after Blanche Armwood, a longtime Tampa resident, educator and activist. The school's mascot is the Hawk.

H.B. Plant High School is a public high school located in the neighborhood of South Tampa in Tampa, Florida, United States. It opened in 1927 between South Himes Avenue on the east and Dale Mabry Highway on the west. The school is named in honor of railroad and hotel tycoon Henry B. Plant, who connected Tampa to the United States railroad system in 1884, helping the isolated village to grow into a large city over the following decades. The school mascot is the Panther, and its motto is "Strength Through Unity." Plant High School has an enrollment of more than 2,500 students.

Howard W. Blake High School is a public magnet high school, with an emphasis on the arts, in Tampa, Florida, United States. It is operated by the School District of Hillsborough County. Originally opened in 1956 as a school for African-Americans, it was integrated as a junior high school after the end of segregation. The current building opened in 1997, when Blake again became a high school.

George D. Chamberlain High School is a public high school in Tampa, Florida. It was opened in 1956 on North Boulevard. The school is named in honor of George D. Chamberlain, who served for several years as a trustee for the Hillsborough County School System. In 2011 Chamberlain was listed as an "A" School; this is a first in the school's history.

A. P. Leto High School is a public high school within the Hillsborough County Public Schools system and is located at 4409 W Sligh Avenue in Tampa, Florida, U.S.. In addition to the four high school grades, Leto also hosts adult night services. Larissa McCoy, the current principal, was appointed in 2017.

Tampa Bay Technical High School (TBT) is a public comprehensive magnet high school for grades 9–12 in Florida, United States. It was established in 1969 as Tampa Bay Vocational Technical School. The school mascot is the Titan.

Land o' Lakes High School is a four-year public high school in Land o' Lakes, Florida. It is a part of the Pasco County Schools District in Pasco County. The school mascot is the Fighting Gators. 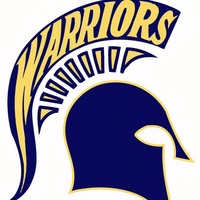 Andrew S. Breidenbaugh is a librarian and director of the Tampa-Hillsborough County Public Library System. He has worked to bring online databases, eBooks, streaming media, music, and courses to the system.

The Tampa Bay Vipers are a professional American football team based in Tampa, Florida. The team is an owned-and-operated member of the new XFL founded by Vince McMahon’s Alpha Entertainment and plays its home games at Raymond James Stadium, along with the Tampa Bay Buccaneers of the NFL and the University of South Florida Bulls.