Thomas Royds (April 11, 1884 – May 1, 1955) was a British solar physicist who worked with Ernest Rutherford on the identification of alpha radiation as the nucleus of the helium atom, and who was Director of the Kodaikanal Solar Observatory, India.

Thomas Royds was born April 11, 1884 in Moorside, near Oldham, Lancashire, UK. He was the third son of Edmund Royds and Mary Butterworth. His father was a cotton spinner and his mother had been a cotton weaver. His eldest brother, Robert Royds, who was 6 years older than Thomas, became an engineer and wrote books on temperature measurement and on the design of steam locomotives.

In 1897 he entered Oldham Waterloo Secondary School and in 1903 he won the King's Scholarship to Owen's College, Manchester University for three years, studying in the Honours School of Physics under Arthur Schuster.

In 1906 he took a First Class B Sc Honours degree in Physics, and stayed at Manchester doing research in spectroscopy, especially on the constitution of the electric spark. From 1907 to 1909 he worked with Ernest Rutherford (later Lord Rutherford, the father of nuclear physics) on the spectrum of radon and, more importantly, on the identification of the alpha particle as the nucleus of the helium atom, in what is called "The Beautiful Experiment." Rutherford and Royds published four joint papers. [1]

From 1909 to 1911, as an 1851 Exhibition Scholar, he worked under Friedrich Paschen in Tübingen, Germany on spectroscopic research mainly in the infra-red, and later under Professor Heinrich Rubens in Berlin on "infra-red restrahlen."

At Manchester University in 1911, he took his D Sc degree in Physics awarded for all his research work to date.

The same year, he was appointed Assistant Director of Kodaikanal Solar Physics Observatory, South India, where he worked partly in collaboration with the director, John Evershed. They studied the displacement of the lines in the sun's spectrum, calling attention to the significance and interpretation of negative displacements, i.e., towards the violet.

Between 1913 and 1937 he produced 49 research papers published at Kodaikanal Observatory. Others, such as the one proving the presence of oxygen in the sun's chromosphere, appeared in scientific journals, such as Nature.

He was appointed Director of Kodaikanal when Evershed retired in 1922.

In 1928, exceptional observation conditions enabled him to photograph a higher prominence on the sun's surface than ever seen before. He also photographed the brightest and largest solar hydrogen eruption up to that date.

In 1936 Dr Royds acted as the Director General of Observatories in India for one year, while the DG was on leave. This entailed responsibility for the Indian Meteorological Service.

Later that year, Royds and Stratton led a solar expedition to Hokkaido, Japan, mainly to study how the wavelengths on different parts of the sun's disc were affected by the scattered light from other parts of the disc. Their work also confirmed Einstein's theory that wavelengths of lines in the sun's spectrum would deviate slightly from the same lines in terrestrial laboratories. This expedition was a complete success.

In the year following, the post of Professor of Astronomy and Director of the Observatory at Istanbul University, Turkey, fell vacant upon the death of the German incumbent. Anxious to increase British influence there, the British Council urged Dr Royds to apply. He was accepted.

He was now 58, and the voyage out was long and arduous in wartime conditions; he had to sail round the Cape of South Africa to Cairo, and from there by small boat to Istanbul.

The first term he lectured in French, but by the second term he was able to lecture in Turkish.

When his contract with Istanbul University ended in the Autumn of 1947, he returned to England, where he spent his last years in retirement. He died of a cerebral haemorrhage on 1 May 1955, leaving his widow, two daughters and a son.

Ernest Rutherford, 1st Baron Rutherford of Nelson, was a New Zealand-born British physicist who came to be known as the father of nuclear physics. Encyclopædia Britannica considers him to be the greatest experimentalist since Michael Faraday (1791–1867). Apart from his work in his homeland, he spent a substantial amount of his career abroad, in both Canada and the United Kingdom.

Nuclear physics is the field of physics that studies atomic nuclei and their constituents and interactions, in addition to the study of other forms of nuclear matter. 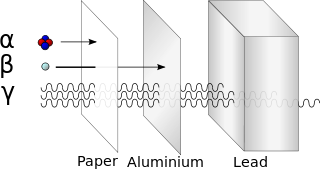 Astrophysics is a science that employs the methods and principles of physics and chemistry in the study of astronomical objects and phenomena. As one of the founders of the discipline said, Astrophysics "seeks to ascertain the nature of the heavenly bodies, rather than their positions or motions in space–what they are, rather than where they are." Among the subjects studied are the Sun, other stars, galaxies, extrasolar planets, the interstellar medium and the cosmic microwave background. Emissions from these objects are examined across all parts of the electromagnetic spectrum, and the properties examined include luminosity, density, temperature, and chemical composition. Because astrophysics is a very broad subject, astrophysicists apply concepts and methods from many disciplines of physics and chemistry, including classical mechanics, electromagnetism, statistical mechanics, thermodynamics, quantum mechanics, relativity, nuclear and particle physics, and atomic and molecular physics.

Pierre Jules César Janssen, usually known as Jules Janssen, was a French astronomer who, along with English scientist Joseph Norman Lockyer, is credited with discovering the gaseous nature of the solar chromosphere, and with some justification the element helium.

John Evershed CIE FRS FRAS was an English astronomer. He was the first to observe radial motions in sunspots, a phenomenon now known as the Evershed effect.

The Indian Institute of Astrophysics (IIA), with its headquarters in Bengaluru, is an autonomous Research Institute wholly financed by the department of Science and Technology, Government of India. IIA conducts research primarily in the areas of astronomy, astrophysics and related fields. 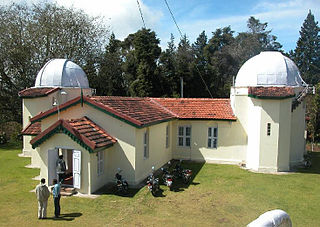 The Kodaikanal Solar Observatory is a solar observatory owned and operated by the Indian Institute of Astrophysics. It is on the southern tip of the Palani Hills 4 km from Kodaikanal town, Dindigul district, Tamil Nadu state, South India.

The Evershed effect, named after the British astronomer John Evershed, is the radial flow of gas across the photospheric surface of the penumbra of sunspots from the inner border with the umbra towards the outer edge.

Anil Kumar Das FRAS, FNI was an Indian scientist, astronomer. During the International Geophysical Year, observatories in Madrid, India, and Manila were responsible for monitoring solar effects. The Kodaikanal Solar Observatory in South India performed this monitoring using their recently built solar tunnel telescope. Das was the director of the Kodaikanal observatory at this time. In 1960 he was responsible for installing a tower/tunnel telescope at the facility that would be used to perform some of the first helioseismology investigations. The crater Das on the far side of the Moon is named after him.

A solar telescope is a special purpose telescope used to observe the Sun. Solar telescopes usually detect light with wavelengths in, or not far outside, the visible spectrum. Obsolete names for Sun telescopes include heliograph and photoheliograph. 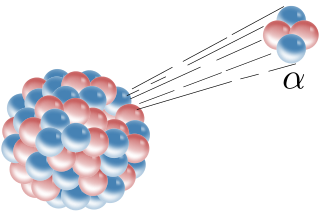 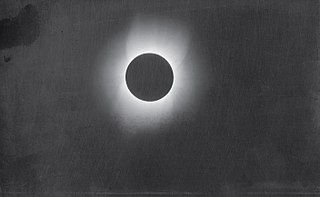 Appadvedula Lakshmi Narayan, better known as A. L. Narayan BA, MA, D.Sc., F.I.P. was an Indian astrophysicist and was the first Indian Director of Kodaikanal Solar Observatory during between 1937 and 1946. He was born in 1887 to Shri Appadvedula Vyasulu and Smt. Mahalakshmi in the Mukkamala village of East Godavari District of Andhra Pradesh. He studied up to matriculation in the higher secondary school at Kothapeta. He developed keen interest in the study of Science and continued his studies in the Government Arts College, Rajahmundry. He passed the B.A. degree and did Postgraduation (M.A.) in Physics from the University of Madras in 1914. He has joined as a lecturer in Physics in Maharajah's College of Vizianagaram.

Arvind Bhatnagar was an Indian astronomer who made significant contributions to solar astronomy and founded several planetaria across India. He was the founder-director of the Udaipur Solar Observatory, and the founder director of Nehru Planetarium of Bombay.

Mary Acworth Evershed was a British astronomer and scholar. Her work on Dante Alighieri was written under the pen name M.A. Orr. Although her middle name is increasingly appearing as Ackworth, this is incorrect. She always gave it as Acworth, and it appeared as such in both her obituaries. The one appearing in the Monthly Notices of the Royal Astronomical Society was written by her nephew A. David Thackeray, who presumably would have known. The first appearance of this incorrect version could well have occurred in the proposal of Mary to be a Fellow of the Royal Astronomical Society; the correct spelling appears when she was subsequently elected a Fellow.

Professor Charles Michie Smith CIE FRSE FRAS was a Scottish astronomer. He founded the Kodaikanal Solar Observatory in the mountains of south India and served as its first Director.

Otto Baumbach (1882-1966) was the glassblower who built part of the apparatus used by Ernest Rutherford and colleagues in the famous Gold foil experiment. In fact, this experiment has been referred to as the Rutherford-Royds-Baumbach experiment:

The essential feature of that famous experiment - surely the centerpiece of Rutherford's Nobel Lecture ate the same fall - was a tiny glass tube blown so thin that it allowed α-particles emitted from radium emanation encapsulated within it to penetrate with negligible change in velocity, yet was impervious to helium gas [17-48]. The tube, still preserved in Cambridge, was the handiwork of Otto Baumbach, imported from Germany by Schuster; his role in Rutherford's laboratory is reminiscent of Kamerlingh Onnes' Glasbläsermeister O Kesselring in Leiden and his craftsmanship - witness figure 14.2 in an earlier chapter.

Indian Institute of Astrophysics Repository - http://prints.iiap.res.in and search for Royds

The Nature of the Alpha Particle from Radioactive Substances (With E Rutherford) Phil Mag ser 6, xvii 281-6 1909 (the original paper)

http://web.lemoyne.edu/~giunta/royds.html (a copy of the paper on the internet)