Thomas Solomon (born 1969 in Milwaukee, Wisconsin) is an American escape artist and magician.

As a boy he was fascinated with mechanical devices. Around the age of thirteen, he was apprenticed to a local locksmith in his hometown of Milwaukee, Wisconsin for a summer which led to a fascination with locks and locking devices. Later, when developing an interest in the art of stage magic, he was able to marry his skill at picking locks with those of a magician and to create an act while in his late teens.

He eventually, focused more on the art of escapology although does still perform magic today. As an escape artist, Thomas Solomon has been profiled in The New York Times. [1] He has performed twice at The White House for Presidents Ronald Reagan and later George HW Bush. In 2003, Solomon had his own network television special on Channel 4 in Great Britain in which he escaped a titanium bank safe underwater, escaped a specially bound plastic restraint hanging from the roof of an S&M Club in London, and a high security prison cell. Later in 2007, he shot a pilot for The History Channel in which he escaped the prison cell of Al Capone, the leg irons of Billy the Kid and the holding cell of Lee Harvey Oswald.

Early Twenties and The Great Escape

In Milwaukee, then Chicago, Solomon first presented "The Great Escape," a show combining magic with one escape from a locked chain in which he demonstrated lock-picking. The nightclub, sensing potential asked Solomon to drop the magic and concentrate only on escapes. As a marketing ploy, the nightclub asked participants to bring whatever they wanted to the theatre (handcuffs, locks, and straitjackets) to challenge the magician. Over the course of three years, he suffered numerous injuries but never failed in an escape.

He has performed a variation of this "Challenge Escape Act" at New York City's famed, former club, MK in the flat-iron district.

Thomas Solomon is co-founder of Patriotic Performers, USA in which he leads a group of performers who donate their time to entertain wounded service members from all branches of the military. Recent engagements have included Walter Reed Army Hospital, Fort Detrick, the US Marine Base in Quantico, Virginia, McGuire Air Force Base, the Wounded Warrior Unit at Fort Dix Army Base and many others. He has received numerous citations, including one from President Barack Obama, Governor Andrew Cuomo of New York and Governor Chris Christie of New Jersey, for his work on behalf of wounded veterans.

By 2013, Solomon had escaped from more than 5500 pairs of handcuffs of all different types from all times in history. He has performed numerous underwater releases from restraints in the Hudson and East Rivers, Boston Harbor, Potomac River, Mississippi, and numerous others. He won the coveted "World's Greatest Escape Artist" award from the Academy of Magical Arts and Sciences. He performed his award-winning handcuff escape act, escaping the restraints of the Los Angeles Police Department on the televised World Magic Awards in 2000. He has accomplished hundreds of straitjacket releases, most notably an escape from the all-leather straitjacket specifically created to thwart him by Menkes Leather Works. He escaped a tightly bound straitjacket in the pouring rain hanging upside down from a tower crane 150 feet above the street in Portland, Oregon in 2006.

He has performed his award-winning handcuff act (2000 World Magic Awards, PAX Television) at The Roxy, The Magic Castle, Bally's and many others. He has performed aboard ships for Royal Caribbean Cruise Line traveling throughout Bermuda and the Caribbean. In 1988 he entertained President Ronald Reagan at the White House where he escaped the handcuffs of the Uniformed Secret Service. He performed again in 1989 for President George Bush and Vice-President Dan Quayle at the White House. He has performed escapes and magic for major trade show clients, Ford Motor Company, State Farm Insurance , Procter & Gamble, Absolut Vodka, 'Winston/Salem Cigarettes, Compaq Computers, Deutsche Bank, Birdseye Frozen Foods, Black and Decker among others. He starred in the Off-Broadway show, theatre of the Macabre which played three years and more than 1700 performances in Manhattan's Greenwich Village.

Recently, Solomon thrilled spectators with an underwater handcuff performance at the New York Aquarium in which members of the New York Police Department locked him in four pairs of handcuffs. In forty degree frigid water, he escaped in less than three minutes thrilling onlookers. [2] His escape, itself a promotion to help bring attention to the Aquarium's 100 million dollar rehabilitation was widely covered by the media.

In 2011, the Society of American Magicians selected Thomas Solomon to star in the storied "Salute To Magic" which has seen some of magic's greatest names as performers. Solomon combined award-winning escapes and magic into a highly theatrical two-hour show that was reminiscent of a Broadway production. The show was performed at El Teatro—El Museo Del Barrio Theatre, New York City's landmark theatre on Manhattan's Upper West Side.

Solomon recently performed live on the Plaza outside for Fox Television network's "Fox and Friends" in which he escaped five pairs of handcuffs in full view of the audience in under one minute. [3]

Solomon also has a fascination with ciphers, codes and other wordplay. He is an amateur cryptographer and commented recently on an article about on-line security in Wired Magazine in which he gave his solution to making passwords more secure. [4] His posters, some images, his promotional decks of playing cards, DVDs and other items often contain hidden messages; some are written in cipher or code. Others are written backwards or worked in with graphics (as in the blue poster). He has used palindromes, recursive acronyms, Morse code and other devices to conceal messages, solutions to an escape, names or important dates related to the image. In a promotional picture for The History Channel taken of him on the New York City subway, there are no less than six hidden images and written messages buried within the picture.

Harry Houdini was a Hungarian-American escape artist, illusionist, and stunt performer, noted for his escape acts. His pseudonym is a reference to his spiritual master, French magician Robert-Houdin (1805–1871). 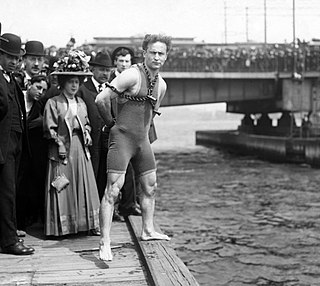 Escapology is the practice of escaping from restraints or other traps. Escapologists escape from handcuffs, straitjackets, cages, coffins, steel boxes, barrels, bags, burning buildings, fish-tanks, and other perils, often in combination.

A straitjacket is a garment shaped like a jacket with long sleeves that surpass the tips of the wearer's fingers. Its most typical use is restraining people who may cause harm to themselves or others. Once the wearer slides their arms into the sleeves, the person restraining the wearer crosses the sleeves against the chest and ties the ends of the sleeves to the back of the jacket, ensuring the arms are close to the chest with as little movement as possible.

Metamorphosis is the name of a stage illusion invented by John Nevil Maskelyne, but most often associated with famous escape artist Harry Houdini and performed to some renown by The Pendragons, among others. It is also known amongst magicians as the Substitution Trunk.

Christopher Nicholas Sarantakos, known professionally as Criss Angel, is an American magician, illusionist and musician. Angel began his career in New York City, before moving his base of operations to the Las Vegas Valley. He is known for starring in the television and stage show Criss Angel Mindfreak and his previous live performance illusion show Criss Angel Believe in collaboration with Cirque du Soleil at the Luxor casino in Las Vegas. The show generated $150 million in tourist revenue to Las Vegas in 2010, but has since been replaced by Mindfreak LIVE! in 2016. He also starred in the television series Criss Angel BeLIEve on Spike TV, the reality-competition television show Phenomenon on NBC, and the 2014 stage show Criss Angel Magicjam. 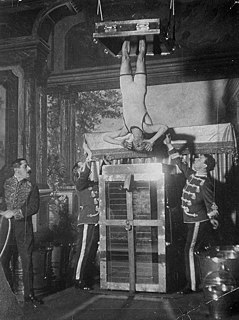 The Chinese Water Torture Cell is a predicament escape made famous by Hungarian-American magician Harry Houdini. The illusion consists of three parts: first, the magician's feet are locked in stocks; next, he is suspended in mid-air from his ankles with a restraint brace; finally, he is lowered into a glass tank overflowing with water and the restraint is locked to the top of the cell.

Dean Gunnarson is a Canadian escapologist. He was born in Winnipeg, Manitoba. He is noted for a series of large scale spectacular stunts done for television. Gunnarson has appeared on television in over 165 countries around the world performing his escapes. Gunnarson has performed over 500 shows across China and his TV escapes have been seen by millions of people there. In 2012 the Chinese Government presented him with "The World's Top Escape Artist" award after a successful escape on live TV. He has also performed across Canada and the US on TV, fairs, shopping malls, sporting events, and for many of the countries top corporations.

Anthony Martin is a professional escape artist, locksmith and Christian Evangelist most known for his daredevil skydiving and underwater escapes on network television.

A belly chain is a physical restraint worn by prisoners, consisting of a chain around the waist, to which the prisoner's hands may be chained or cuffed. Sometimes the ankles are also connected by means of longer chains.

Zdeněk Bradáč is a Czech illusionist, magician, escapologist and juggler. He has been recognized for breaking multiple records for straitjacket and handcuff escapes as well as juggling and illusions.

Randolph Osborne Douglas was a British silversmith, artist and amateur escapologist, who worked under the stage name 'The Great Randini'. Douglas is said to have devised tricks for Harry Houdini. He later created a museum of curios in Castleton in Derbyshire.

Roslyn Walker is an entertainer. He currently resides in Conwy with his partner, dancer Foxee Stole. 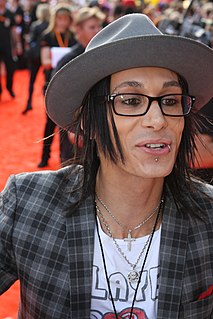 Paul Cosentino known mononymously by his stage name Cosentino, is an Australian illusionist and escapologist.

Alexis Arts, aka Danilo Audiello, is an Italian illusionist, actor, dancer, and creative director in the theatre world. He is currently the fastest escapologist in the world. His shows mix artistic illusionism with mentalism and other disciplines such as dance, transformation (quick-change), mime, theatre, Chinese shadow artistry, and martial arts. As such he could be defined not only as a magician, but as an all round entertainer trained in numerous fields. His passion is to combine these skills in order to create different atmospheres and characters that tell moving, unexpected stories—stories which make audiences question their perceptions of reality. As such Arts refers to himself as a "fantasist"—dedicated to building surreal spectacles and stories that both move and perplex the viewer.

David Merlini is a Hungarian-Italian escape artist, and World Record holder, described by Expo 2015 as the world's most famous escapologist, currently serving as Director of The House of Houdini, the only Houdini museum in Europe.

Norman Bigelow was an American illusionist. He has been described by the Society of American Magicians as "one of America’s leading escape artists". 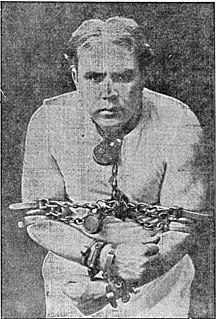