Thomas Vonier (FAIA, RIBA) is a Paris-based architect and current president of the International Union of Architects.

Vonier attended Washington University in St. Louis and the University of Wisconsin–Milwaukee, earning a Master of Architecture.

Based in Paris and Washington D.C., Tom’s practice serves public and private clients with global industrial operations. He also works with municipalities to improve urban security. As a board certified security professional, Tom led groundbreaking research for US embassies and consulates, resulting in landmark recommendations to the Secretary of State and a new generation of design criteria. He was international advisor to the Federal Triangle planning project, which received a Presidential Design Award.

With a group of young architects in Washington D.C., Vonier pioneered work in energy conscious design and the use of solar and wind energy. He was part of the team that received a P/A Design Award for the College of the Atlantic in Bar Harbor, Maine. He received the Henry Adams Award for his research on public museums, completed under a fellowship from the National Science Foundation.

An award-winning author on both architecture and security, Tom was the European correspondent for Progressive Architecture magazine, where his work was nominated for the Jesse H. Neal Award.

Vonier was also liaison delegate to the Architects' Council of Europe in Brussels. He was elected to serve as Secretary General of the International Union of Architects (UIA) [4] in Paris, and leads in its roles with UNESCO, the WTO and various world heritage and climate organizations. He has lectured widely on architecture, and served as a research affiliate with the Laboratory of Architecture and Planning at MIT.

An avid cyclist, he followed the Tour de France and wrote about the experience for The Washington Post. [5]

The International Union of Architects is the only international non-governmental organization that represents the world's architects, now estimated to number some 3.2 million in all. The UIA was founded in Lausanne, Switzerland, in 1948. The General Secretariat is located in Paris. It is recognized as the only global architecture organisation by most United Nations agencies, including UNESCO, UNCHS, ESOSOC, UNIDO, and the World Health Organization, as well as the WTO. The current (2017-2020) president is Thomas Vonier from the United States of America.

Milton Bennett Medary Jr. was an American architect from Philadelphia, Pennsylvania, practicing with the firm Zantzinger, Borie and Medary from 1910 until his death. 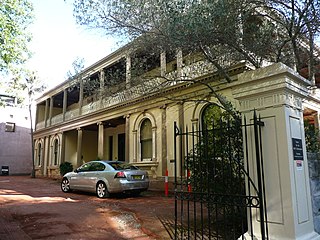 The Australian Institute of Architects is a professional body for architects in Australia.

Weiss/Manfredi is a multidisciplinary New York City-based design practice that combines landscape, architecture, infrastructure, and art. The firm's notable projects include the Seattle Art Museum's Olympic Sculpture Park, the Brooklyn Botanic Garden Visitor Center, the Tata Innovation Center at Cornell Tech, the Singh Center for Nanotechnology at the University of Pennsylvania, the Museum of the Earth the Embassy of the United States, New Delhi, and Hunter's Point South Waterfront Park.

Murat Soygeniş FAIA,, a Founding Partner of S+ ARCHITECTURE, is an internationally known professor and architect. He is known with his contributions to architecture, planning, design, theoretical writing and teaching.

Marshall Purnell is a prominent African-American architect and 2008 president of the American Institute of Architects.

Floyd Archibald Naramore was a Seattle architect. He was Seattle Schools Architect from 1919 to 1932, and he was a founding partner, in 1943, of the firm that today is known as NBBJ.

Robert Ivy (FAIA) is the Executive Vice President and Chief Executive Officer of the American Institute of Architects (AIA) since 2011.

Gaétan Siew is a Mauritian architect.

The Design Futures Council is an interdisciplinary network of design, product, and construction leaders exploring global trends, challenges, and opportunities to advance innovation and shape the future of the industry and environment. Members include architecture and design firms, building product manufacturers, service providers, and forward-thinking AEC firms of all sizes that take an active interest in their future.

Charles E. Dagit Jr. is a contemporary American architect, artist, writer and professor. He is a Fellow of the American Institute of Architects residing in suburban Philadelphia, Pennsylvania, USA.

Susan A. Maxman is an American architect who founded a firm called Susan Maxman Architects in 1985, which she expanded to Susan Maxman & Partners Ltd in 1995. Her firm is associated with a large number of projects involving a wide spectrum of architectural services, including design of old and new buildings, restoration and rehabilitation works, master and site planning, feasibility reports, programming, historic preservation, and interior design. She was the first woman elected as president of the American Institute of Architects in 1992. Her expertise in adoption of the "principles of sustainable design" in her projects has received national appreciation, and in 2011 Maxman was nominated by President Barack Obama to the Board of Directors of the National Institute of Building Sciences.