Born in South Africa, he represented Great Britain at the 2000 Summer Olympics in Sydney, Australia. [2]

He represented England and won three silver medals in the 105 kg category, at the 1998 Commonwealth Games in Kuala Lumpur, Malaysia. [3] [4] The three medals were won during an unusual period when three medals were awarded in one category (clean and jerk, snatch and combined) which invariably led to the same athlete winning all three of the same colour medal. [5]

Yule then twice claimed a bronze medal for Scotland at the Commonwealth Games in 2002 and 2006. [1]

Yule was educated at Park House School and then St Batholomew's School in Newbury before attending Brasenose College, University of Oxford where in 1998 he received an MEng degree in Engineering Science.

* By 2002, medals were awarded in all three categories. 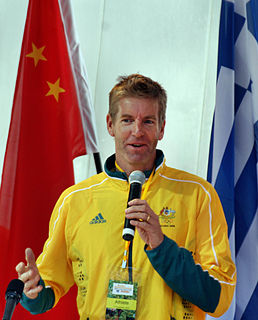 Peter May is a British male weightlifter.

Natasha Jane Barker is an Australian female weightlifter, competing in the 53 kg category and representing Australia at international competitions.

Anthony Arthur is a retired British male weightlifter, competing in the 85 kg category and representing Great Britain and England at international competitions.

Leon Thomas Griffin is a British male former weightlifter, competing in the 85 kg category and representing Great Britain and England at international competitions.

Keith Boxell, is a male former weightlifter who competed for Great Britain and England.

Andrew Saxton, is a male former weightlifter who competed for Great Britain and England.

Mark Thomas, is a male former weightlifter who competed for Great Britain and England.

Stephen Ward, is a male former weightlifter who competed for England.

Ross Paul Brewer is a male former British gymnast. He is a double gold medal winner at the Commonwealth Games.