Thomasina Jean "Tommi" Miers, OBE (born February 1976) is an English cook, writer and television presenter. She is the co-founder of the Wahaca chain of Mexican street food restaurants.

Thomasina Jean "Tommi" Miers was born in February 1976 [1] in Cheltenham, [2] the daughter of (Michael) Probyn Miers, a joiner and furniture maker, [3] formerly a management consultant [4] [5] and Niki Miers, of Guiting Power, Cheltenham. [6] [7] She grew up in "a big rambling house" at Acton, West London. [8] The Miers family, landed gentry originally of Aldingham, Cumbria (then in Lancashire), owned the Ynyspenwllch estate in Glamorganshire until the time of her grandfather, Cmdr Richard Eustace Probyn Miers, RN. [9] Miers has a twin brother, Dighton, and a sister, Talulah. [10] [8]

She studied at St Paul's Girls' School and Ballymaloe Cookery School and worked as a freelance cook and writer, with influences from time spent in Mexico. [11]

She is co-editor with Annabel Buckingham of the cookbook Soup Kitchen (with an introduction by Hugh Fearnley-Whittingstall). She has also written Cook: Smart Seasonal Recipes for Hungry People, [16] The Wild Gourmets: Adventures in Food and Freedom, with Guy Grieve, [17] and Mexican Food Made Simple. [18]

Miers co-founded Wahaca, which became a chain of Mexican "street food" restaurants, alongside Mark Selby in 2006. [19] The company opened its first restaurant in London's Covent Garden in August 2007 [20] and in October 2008 a second opened at Westfield London. [21] In 2011, Wahaca launched their first mobile street kitchen, selling Mexican street food on the streets of London. [22] As of December 2017, Wahaca had 25 branches. [23]

Miers is married to Mark Williams, a fund manager at Liontrust Asset Management [24] and they have three daughters. [6] [25]

Nigella Lucy Lawson is an English food writer, chef and cooking show host. She is the daughter of Nigel Lawson, a former Conservative Chancellor of the Exchequer, and Vanessa Lawson, whose family owned the J. Lyons and Co. food and catering business.

Jamie Trevor Oliver is a British chef and restaurateur. He is known for his approachable cuisine, which has led him to front numerous television shows and open many restaurants.

Dione Lucas was an English chef, and the first female graduate of Le Cordon Bleu.

Keith Floyd was an English celebrity cook, restaurateur, television personality and bon viveur who hosted cooking shows for the BBC and published many books combining cookery and travel. On television, his eccentric style of presentation – usually drinking wine as he cooked and talking to his crew – endeared him to millions of viewers worldwide.

Christopher Richard "Rick" Stein, is an English celebrity chef, restaurateur and television presenter. Along with business partner Jill Stein he has run the Stein hotel and restaurant business in the UK for over forty years. The business has a number of renowned restaurants, shops and hotels in Padstow along with other restaurants in Marlborough, Winchester and Barnes. He is also the head chef and a co-owner of "Rick Stein at Bannisters" at Mollymook and Port Stephens in Australia, with his second wife Sarah. He has written cookery books and presented television programmes. 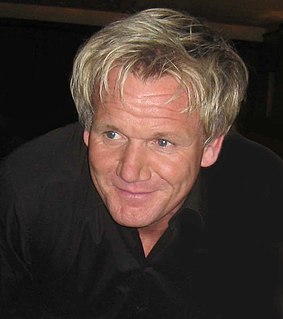 Gordon James Ramsay is a British chef, restaurateur, writer and television personality. He was born in Johnstone, Scotland, and raised in Stratford-upon-Avon, England. His restaurants have been awarded 16 Michelin stars in total and currently hold a total of seven. His signature restaurant, Restaurant Gordon Ramsay in Chelsea, London, has held three Michelin stars since 2001. After rising to fame on the British television miniseries Boiling Point in 1998, Ramsay had become one of the best-known and most influential chefs in the UK by 2004. 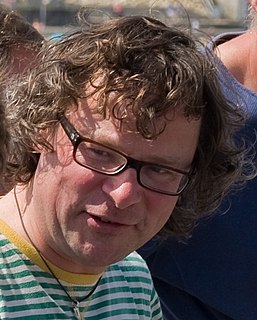 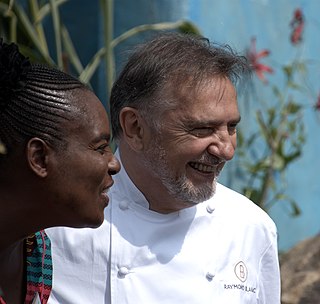 A celebrity chef is a kitchen chef who has become a celebrity. Today, chefs often become celebrities by presenting cookery advice and demonstrations, usually through the mediums of television and radio, or in printed publications. While television is ultimately the primary way for a chef to become a celebrity, some have achieved this through success in the kitchen, cook book publications, and achieving awards such as Michelin stars, while others are home cooks that won competitions.

John William Burton-Race is a British Michelin starred chef, television personality and celebrity chef, made famous by the Channel 4 series French Leave and its sequel Return of the Chef and I'm A Celebrity, Get Me Out of Here.

Paul Rankin is a celebrity chef from Ballywalter, County Down, Northern Ireland. Rankin's parents moved back to Ballywalter, where he grew up, some time after he was born. This was stated when he was the subject of an episode of a short programme named Proud Parents on Channel 4, made in 2006. On the episode of Ready Steady Cook first broadcast on Tuesday 26 February 2008, he himself stated he was born in Scotland. 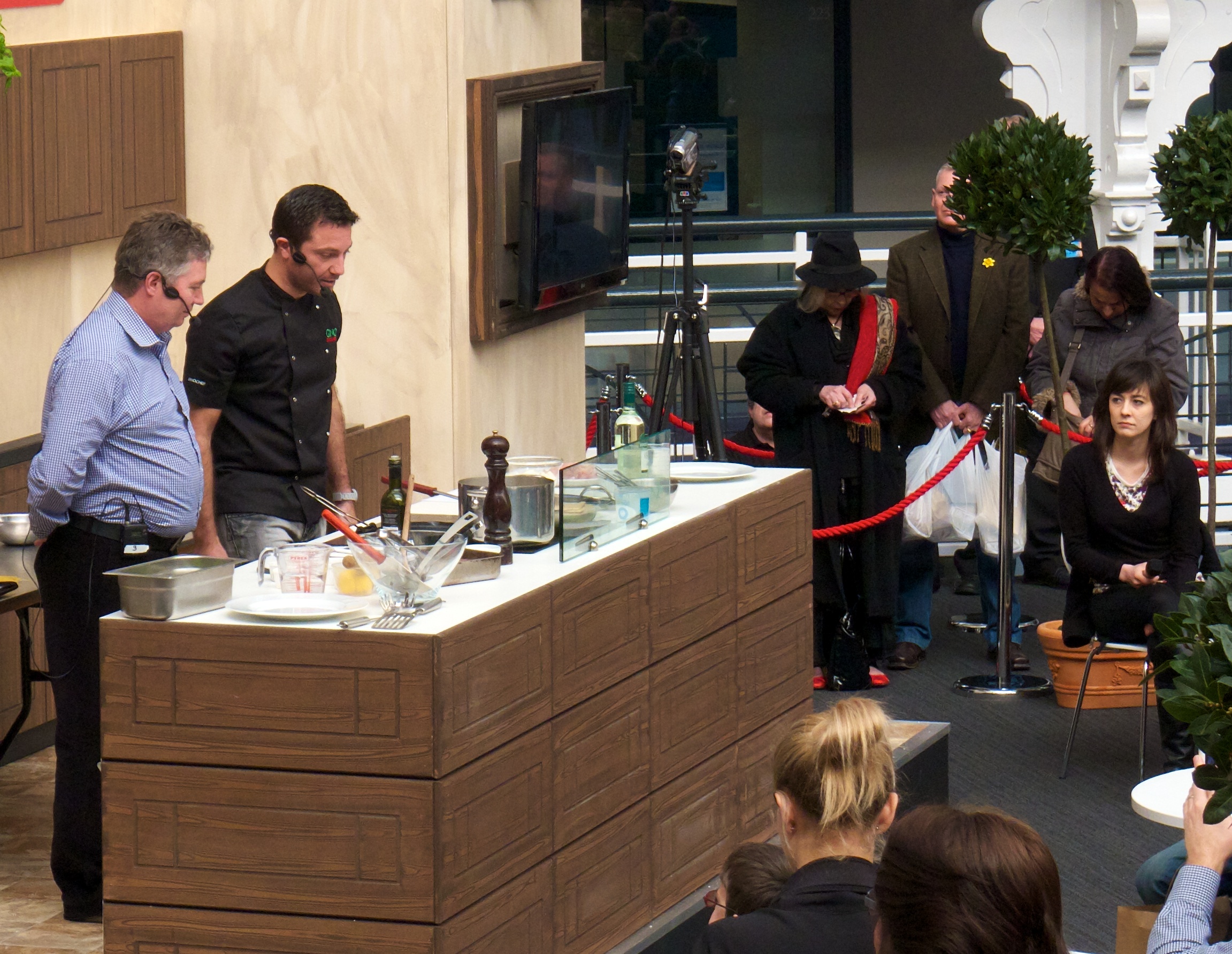 Gennaro "Gino" Sheffield D'Acampo is an Italian celebrity chef and media personality based in the United Kingdom, best known for his food-focused television shows and cookbooks.

Jun Tanaka is an American-born Japanese-British UK TV chef, best known for presenting Channel 4's Cooking It as well as appearing in Saturday Kitchen on BBC One. He was the third Grand Champion of the American competitive cooking show, Chopped.

Aiden Byrne is an English chef, best known as the owner of a number of establishments including The Collingwood, a bar and restaurant in West Kirby.

Mom Luang Sirichalerm Svasti, who is usually known by his nickname McDang, is a Thai food expert, chef, and writer. He is the only Thai chef to have his own training class at Le Cordon Bleu College of Culinary Arts. 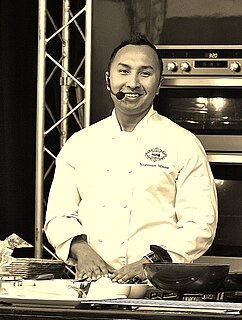 Dan Lepard is an Australian baker, food writer, photographer, television presenter and celebrity chef. He was previously a fashion photographer working for Italian Vogue before changing careers age 27, and is today known for reconciling historical methods with innovation in baking.

Wahaca is a UK restaurant group selling Mexican-style street food, co-founded by Thomasina Miers, with 27 branches in the United Kingdom.