Thor Equities was founded in 1986 by President & CEO Joseph J. Sitt. His first investment was a property sold at tax auction on East Tremont Avenue in the Bronx, a chronically under served retail area, where he built a one-story retail structure with money from family and friends. [9] He proceeded to secure national retailers Rite Aid Pharmacy and Payless Shoes after convincing them of the value of this location. [10]

Each Ashley Stewart store hired from within the community, and the company was recognized by President Clinton for its contribution to the Welfare-to-work program. [11] Ashley Stewart quickly grew to over 380 stores in more than 100 cities, which prompted many national retailers to follow suit and helped change the urban retail landscape. [9] [11] Sitt was also part owner of the Children's Place kids clothing chain as well as Marianne Stores, a retail outlet specializing in clothing for Latina women. [11]

As business boomed, Sitt sold his interest in 2000 to concentrate on urban real estate through his company Thor Equities. [9]

In 2004, Sitt was profiled by Crains New York in its annual "40 Under 40" issue, which celebrates those individuals in New York City who have achieved success in business before turning 40. [10]

In recent years, Thor has expanded its holdings internationally to include properties in cities like Mexico City, London, Paris, Montreal, Cannes, Milan and Madrid. [13] [14]

In February 2015, Thor acquired a retail property at 777 Saint Catherine Street in Montreal, a historical building located in Montreal's shopping corridor that is currently occupied by Banana Republic.

Thor is a major retail property owner on New York's Fifth Avenue and Madison Avenue. [20] [23] Sitt has been seen as one of the market makers on Fifth Avenue, helping push retail growth further below the traditional southern border at 49th Street. [24]

Thor has also made significant investments in the Meatpacking District, betting on the area to continue its climb as a premier retail destination in Manhattan, driven in part by the High Line and arrival of the new Whitney Museum. [25] [26] [27]

Thor is also heavily active in New York's SoHo area and owns numerous properties in the district. In 2013, Sitt partnered with several investors to purchase 529 Broadway for $150 million. [28] In March 2015, the company leased its entire 15,000-square-foot building at 155 Mercer Street in SoHo to Dolce & Gabbana for the brand's flagship retail store.

Other areas of Manhattan where Thor owns properties include Tribeca, Madison Avenue, Chelsea, Bowery, Flatiron, the Upper East Side, and its headquarters near Bryant Park. [20]

In 2014 and 2015, Thor purchased a number of residential buildings in Manhattan including 98 Morningside Avenue and 838 West End Avenue, as well as a portfolio of more than two dozen apartment buildings such as 250 West 19th Street. [29]

A notable development is Albee Square Mall in Downtown Brooklyn. After Thor purchased the mall in 2001, it made various facility improvements in an effort to attract new tenants. [31] Later in 2005, Thor announced plans to build the first tower at the site also known as City Point. [32] The building was to be the tallest tower in Brooklyn. After the city changed its zoning to permit development of the site, Thor sold the site and development plan for $125 million to a financial company. [33]

In 2005, the company bought a parcel of land west of the amusement district in Coney Island for $13 million, and sold it 14 months later for $90 million.[ citation needed ] Thor then reinvested in more land on Coney Island along Stillwell Avenue as well as some Boardwalk property including Astroland. In 2006, Thor announced plans for a $1.5 billion Las Vegas-style amusement park resort, which required several zoning changes. The city had a competing vision for Coney Island and attempted to buy Thor's land, but Thor did not accept the city's offer. Astroland ceased operations on September 7, 2008. Interim amusement rides and a flea market opened in the summer of 2009 and closed later that year.

On November 11, 2009, Sitt reached a deal with New York City to sell part of his 12.5 acres (51,000 m2) of land in Coney Island for $95.6 million so that the city and Thor could jointly redevelop Coney Island, completing the three-year negotiation.[ citation needed ]

Thor owns several retail properties on South State Street including 1-15 East Oak Street, home to the Chicago flagship of Barneys New York. South State Street is one of the main shopping streets located inside Chicago's Loop area, where vacancies were at a 10-year low in 2013. [38]

Thor owns the landmarked Phelan Building, a Victorian-style steel-framed structure reminiscent of New York's Flatiron building, at 760 Market Street in San Francisco. Thor acquired the property in 2008 from the Westcore Group. The building is home to the San Francisco office of the Sears Corporation as well as Twitter co-founder Evan Williams' startup Obvious Corp. [39] [40] In a press release announcing the lease to Obvious, Joseph Sitt cited the growing trend of Silicon Valley tech companies moving to the surrounding area to set up shop. [41]

Joseph Sitt is chairman of Thor Urbana Capital, based in Mexico City. The venture's first project was a full block high-end retail development along Playa del Carmen's Quinta Avenida. [42] [43] In 2016, Thor's hospitality division opened the Thompson Playa del Carmen, a boutique hotel. As of 2017 [update] , the company is also developing the Ritz-Carlton in Mexico City's financial district, among other properties. [44] [45]

Thor Retail Advisors, led by CEO Joseph Sitt, is an affiliate of Thor Equities that provides tenant representation, brokerage and advisory services to retailers. The company has offices in New York, London, Paris, and Mexico City. [46] [47] [14]

Thor Digital, is the latest division launched in early 2022, and focuses on the acquisition and development of data centers across Europe with an equity commitment of up to US$3 billion and goal of US$9 billion in acquisitions value. [48]

Joseph Sitt is the chairman and founder of the not-for-profit Global Gateway Alliance (GGA), which was created in 2012 to address the infrastructure challenges that New York's airports face. [49] [50] [51]

Joseph Sitt is an active board member of the Bedford Stuyvesant Restoration Corporation, a community development organization. He was instrumental in helping restore Restoration Plaza, the neighborhood's Town Square and the BSRC's main asset, and bringing to the area more retail options including its first family sit-down restaurant and supermarket. [52] [53] In 2007, Harvard professor Michael Porter and the Initiative for a Competitive Inner City (ICIC) honored him for his commitment to fostering healthy competitive business conditions and new opportunities in inner city neighborhoods. [54]

Sitt is a managing director of Venetian Heritage, a not-for-profit organization that works to restore the Jewish museum and ancient synagogues of the Ghetto of Venice. [55]

Sitt is also a frequent speaker and lecturer at various universities including Columbia University, New York University, Baruch, and Notre Dame. He serves on the board of the Real Estate Roundtable in Washington D.C., the Department of Real Estate at Baruch College, and is a member of the Partnership for New York City. [56]

Mr. Sitt has been named by New York Observer in its annual list as one of the Most Powerful People in New York Real Estate. [57]

In May 2020, Thor 's offer to sell 933 Broadway to Mactaggart fell apart. When they clashed over a crucial deadline in an approximately $24 million Flatiron District retail contract, Thor Equities and Mactaggart Family & Associates pulled out their abacus and calendar according to new lawsuit. [58] 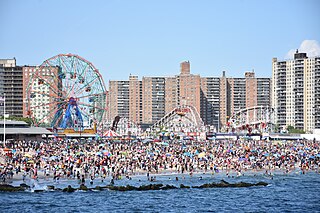 Coney Island is a peninsular neighborhood and entertainment area in the southwestern section of the New York City borough of Brooklyn. The neighborhood is bounded by Brighton Beach and Manhattan Beach to its east, Lower New York Bay to the south and west, and Gravesend to the north and includes the subsection of Sea Gate on its west. More broadly, Coney Island or sometimes for clarity the Coney Island peninsula consists of Coney Island proper, Brighton Beach, and Manhattan Beach. This was formerly the westernmost of the Outer Barrier islands on the southern shore of Long Island, but in the early 20th century it became a peninsula, connected to the rest of Long Island by land fill.

Fulton Street is a long east–west street in northern Brooklyn, New York City. This street begins at the intersection of Adams Street and Joralemon Street in Brooklyn Heights, and runs eastward to East New York and Cypress Hills. At the border with Queens, Fulton Street becomes 91st Avenue, which ends at 84th Street in Woodhaven. 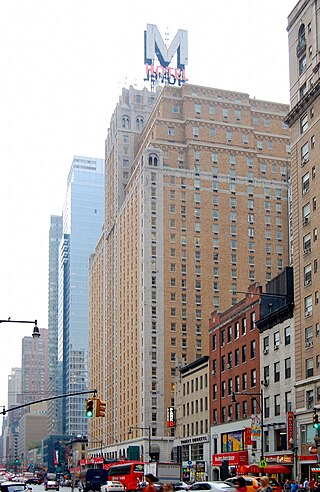 Row NYC Hotel is a hotel at 700 Eighth Avenue, between 44th and 45th Streets, in the Midtown Manhattan neighborhood of New York City. The hotel is 27 stories tall with 1,331 rooms. Designed by Schwartz & Gross, with Herbert J. Krapp as consulting architect, it was developed by brothers Henry and Irwin Chanin and opened on February 1, 1928, as the Hotel Lincoln. The hotel largely retains its original brick-and-terracotta facade. The interior spaces, which originally included a lobby and various restaurants on the first three stories, have been redesigned substantially over the years. 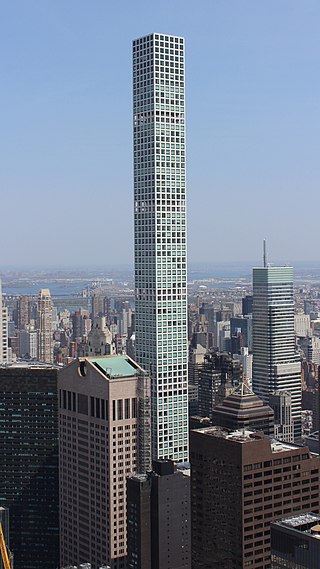 Gary Barnett is an American businessman. He is the president and founder of Extell Development Company, a real estate development firm involved in residential, commercial and hospitality properties, including several high-profile buildings in Manhattan, New York.

Joseph Chetrit is an American real estate investor and developer and founder of the Chetrit Group.

Joseph Moinian is an Iranian-American investor, real estate developer, and philanthropist. He is the founder and CEO of The Moinian Group, one of the largest privately held real-estate firms in the United States.

Jeff Sutton is an American billionaire real estate developer and the founder of Wharton Properties.

Joseph Jack Cayre is an American businessman and real estate developer. Together with his brothers he co-founded the record label Salsoul Records, video tape distributor and producer GoodTimes Entertainment, and video game publisher GT Interactive. He is also the founder and principal of the New York-based real estate development firm Midtown Equities.

Stanley Isaac Chera was an American businessman and investor. He was the founder of Crown Acquisitions. Born in Brooklyn to a Syrian Jewish family, Chera started purchasing real estate in New York City in the 1980s, first as a minority partner and later in 2000s as the lead developer.

Brookfield Property Partners L.P. is a global commercial real estate firm that is a publicly traded limited partnership and a subsidiary of Brookfield Asset Management, an alternative asset management company. Its portfolio includes properties in the office, multi-family residential, retail, hospitality, and logistics industries throughout North America, Europe, and Australia. Its subsidiary Brookfield Properties is responsible for the management of these facilities.

45 Broad Street is a 68-story, 1,039-foot (317-meter) supertall residential skyscraper being constructed in the Financial District of Manhattan, New York City. The building will become Lower Manhattan's tallest residential tower. Excavation started in 2017, but as of 2020, construction is on hold.

SHVO is a real estate investment and development company based in New York City with offices in Miami, San Francisco, Los Angeles, and Chicago. It purchases and develops high end properties in the United States and internationally. SHVO was founded by Michael Shvo who serves as the company Chairman and CEO.

520 Fifth Avenue is a mixed-use supertall building under construction in New York City. The building occupies the former site of three structures. Rabina is developing the building, and architectural firm Kohn Pedersen Fox designed the structure and serves as architect of record.