Madison Avenue is a north-south avenue in the borough of Manhattan in New York City, United States, that carries northbound one-way traffic. It runs from Madison Square (at 23rd Street) to meet the southbound Harlem River Drive at 142nd Street. In doing so, it passes through Midtown, the Upper East Side (including Carnegie Hill), East Harlem, and Harlem. It is named after and arises from Madison Square, which is itself named after James Madison, the fourth President of the United States.

Madison Avenue was not part of the original Manhattan street grid established in the Commissioners' Plan of 1811, and was carved between Park Avenue (formerly Fourth) and Fifth Avenue in 1836, due to the effort of lawyer and real estate developer Samuel B. Ruggles, who had previously purchased and developed New York's Gramercy Park in 1831, and convinced the authorities to create Lexington Avenue and Irving Place between Fourth Avenue (now Park Avenue South) and Third Avenue in order to service it.

The street's name has been metonymous with the American advertising industry since the 1920s. Thus, the term "Madison Avenue" refers specifically to the agencies and methodology of advertising. [2] "Madison Avenue techniques" refers, according to William Safire, to the "gimmicky, slick use of the communications media to play on emotions." [3]

There are numerous structures designated as New York City Landmarks (NYCL), National Historic Landmarks (NHL), and National Register of Historic Places (NRHP) on Madison Avenue. From south to north (in increasing address order), they include: [5] [6]

The term "Madison Avenue" is often used metonymically to stand for the American advertising industry. Madison Avenue became identified with advertising after that sector's explosive growth in this area in the 1920s. [8]

Among various depictions in popular culture, the portion of the advertising industry which centers on Madison Avenue serves as a backdrop for the AMC television drama Mad Men , which focuses on industry activities during the 1960s. [8]

In recent decades, many agencies have left Madison Avenue, with some moving further downtown and others moving west. [9] [10] The continued presence of large agencies in the city made New York the third-largest job market per capita in the U.S. in 2016, according to a study by marketing recruitment firm MarketPro. [11] Today, several agencies are still located in the old business cluster on Madison Avenue, including StrawberryFrog, TBWA Worldwide, Organic, Inc., and DDB Worldwide. However, the term is still used to describe the agency business as a whole and large, New York–based agencies in particular. [8]

Madison Square Park is a 6.2-acre (2.5-hectare) [12] public park which runs along Madison Avenue from East 26th Street to East 23rd Street. It is bordered on the west by Fifth Avenue and Broadway as they cross. The park was named for James Madison, fourth President of the United States. [13]

Madison Square Garden took its name from the location of the first building of that name, located on the northeast corner of Madison Avenue at 26th Street, across from the Park. The first Garden was a former railroad terminal for the Park Avenue main line, which was converted into an open-air circus venue by P. T. Barnum in 1871 and was renamed "Madison Square Garden" in 1879. (The New York Life Insurance Building now occupies that entire city block.) The original Garden was demolished in 1889 and replaced by a new indoor arena designed by Stanford White that opened the following year. The second Garden had a bronze statue of the Roman goddess Diana on the tower of the sports arena. When it moved to a new building at 50th Street and Eighth Avenue in 1925 it kept its old name. Madison Square Garden is now located at Eighth Avenue between 31st and 33rd Street; however, it still retains the name.

Although no New York City Subway stations are named after Madison Avenue, the Fifth Avenue/53rd Street station on the E and​ M trains has an entrance on Madison Avenue. [17]

Pursuant to Section 4-12(m) of the New York City Traffic Rules, [18] driving a vehicle other than a bus in the bus lane on Madison Avenue to turn right during the restricted hours specified by sign between 42nd Street and 59th Street is prohibited, then permitted at 60th Street, but a taxicab carrying a passenger may use the bus lane to turn right at 46th Street. Bikes are excluded from this prohibition.

In July 1987, then-New York City Mayor Edward Koch proposed banning bicycling on Fifth, Park and Madison Avenues during weekdays, but many bicyclists protested and had the ban overturned. [19] When the trial was started on Monday, August 24, 1987 for 90 days to ban bicyclists from these three avenues from 31st Street to 59th Street between 10 a.m. and 4 p.m. on weekdays, mopeds would not be banned. [20] 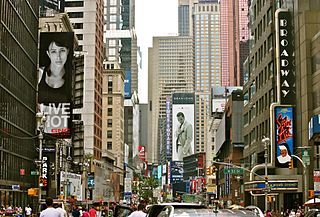 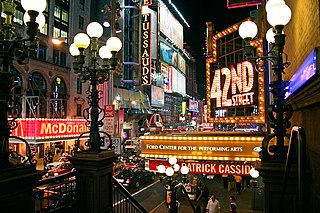 42nd Street is a major crosstown street in the New York City borough of Manhattan, running primarily in Midtown Manhattan and Hell's Kitchen. The street is the site of some of New York's best known buildings, including the headquarters of the United Nations, Chrysler Building, Grand Central Terminal, New York Public Library Main Branch, Times Square, and the Port Authority Bus Terminal. 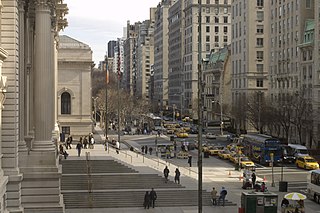 Fifth Avenue is a major thoroughfare in the borough of Manhattan in New York City. It stretches north from Washington Square Park in Greenwich Village to West 143rd Street in Harlem. It is considered one of the most expensive streets in the world.

Park Avenue is a wide New York City boulevard which carries north and southbound traffic in the borough of Manhattan. For most of the road's length in Manhattan, it runs parallel to Madison Avenue to the west and Lexington Avenue to the east. Park Avenue's entire length was formerly called Fourth Avenue; the title still applies to the section between Cooper Square and 14th Street. The avenue is called Union Square East between 14th and 17th Streets, and Park Avenue South between 17th and 32nd Streets. 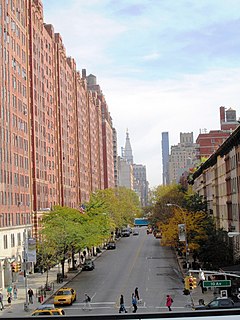 23rd Street is a broad thoroughfare in the New York City borough of Manhattan, one of the major two-way, east-west streets in the borough's grid. As with Manhattan's other "crosstown" streets, it is divided into its east and west sections at Fifth Avenue. The street runs from Avenue C and FDR Drive in the east to Eleventh Avenue in the west. 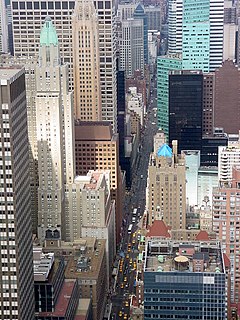 Lexington Avenue, often colloquially abbreviated as "Lex", is an avenue on the East Side of the borough of Manhattan in New York City that carries southbound one-way traffic from East 131st Street to Gramercy Park at East 21st Street. Along its 5.5-mile (8.9-kilometer), 110-block route, Lexington Avenue runs through Harlem, Carnegie Hill, the Upper East Side, Midtown, and Murray Hill to a point of origin that is centered on Gramercy Park. South of Gramercy Park, the axis continues as Irving Place from 20th Street to East 14th Street. 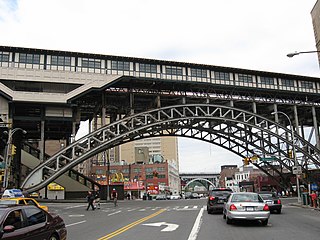 125th Street, co-named Martin Luther King Jr. Boulevard, is a two-way street that runs east–west in the New York City borough of Manhattan, from First Avenue on the east to Marginal Street, a service road for the Henry Hudson Parkway along the Hudson River in the west. It is often considered to be the "Main Street" of Harlem. 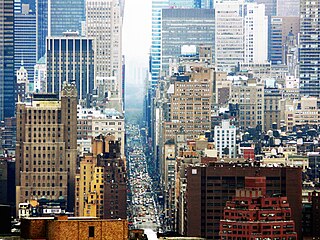 Seventh Avenue – known as Adam Clayton Powell Jr. Boulevard north of Central Park – is a thoroughfare on the West Side of the borough of Manhattan in New York City. It is southbound below Central Park and a two-way street north of the park.

Third Avenue is a north-south thoroughfare on the East Side of the New York City borough of Manhattan, as well as in the center portion of the Bronx. Its southern end is at Astor Place and St. Mark's Place. It transitions into Cooper Square, and further south, the Bowery, Chatham Square, and Park Row. The Manhattan side ends at East 128th Street. Third Avenue is two-way from Cooper Square to 24th Street, but since July 17, 1960 has carried only northbound (uptown) traffic while in Manhattan; in the Bronx, it is again two-way. However, the Third Avenue Bridge carries vehicular traffic in the opposite direction, allowing only southbound vehicular traffic, rendering the avenue essentially non-continuous to motor vehicles between the boroughs.

The Franklin D. Roosevelt East River Drive, commonly called the FDR Drive for short, is a 9.68-mile (15.58 km) limited-access parkway on the east side of the New York City borough of Manhattan. It starts near South and Broad Streets, just north of the Battery Park Underpass, and runs north along the East River to the 125th Street / Robert F. Kennedy Bridge / Willis Avenue Bridge interchange, where it becomes the Harlem River Drive. All of the FDR Drive is designated New York State Route 907L (NY 907L), an unsigned reference route. 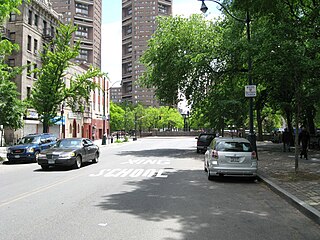 110th Street is a street in the New York City borough of Manhattan. It is commonly known as the boundary between Harlem and Central Park, along which it is known as Central Park North. In the west, between Central Park West/Frederick Douglass Boulevard and Riverside Drive, it is co-signed as Cathedral Parkway.

The Madison Avenue Bridge is a four-lane swing bridge crossing the Harlem River in New York City, connecting Madison Avenue in Manhattan with East 138th Street in the Bronx. It was designed by Alfred P. Boller and built in 1910, doubling the capacity of an earlier swing bridge built in 1884. The bridge is operated and maintained by the New York City Department of Transportation.

MTA Regional Bus Operations operates local and express buses serving New York City in the United States out of 29 bus depots. These depots are located in all five boroughs of the city, with one located in nearby Yonkers in Westchester County. 21 of these depots serve MTA New York City Transit (NYCT)'s bus operations, while the remaining eight serve the MTA Bus Company. These facilities perform regular maintenance, cleaning, and painting of buses, as well as collection of revenue from bus fareboxes. Several of these depots were once car barns for streetcars, while others were built much later and have only served buses. Employees of the depots are represented by local divisions of the Transport Workers Union of America (TWU), particularly the TWU Local 100 and 101, or of the Amalgamated Transit Union (ATU)'s Local's 726 for all depots in Staten Island, 1056 for Casey Stengel, Jamaica, and Queens Village Depots, and 1179 for JFK & Far Rockaway Depots.

The Bx1 and Bx2 are two bus routes that run on the Grand Concourse in the Bronx, New York City. The routes, which are operated by the MTA Regional Bus Operations, also follow Sedgwick Avenue and Mosholu Parkway for a short distance at their northern end. As the numbers suggest, these were the first two bus routes in the Bronx. 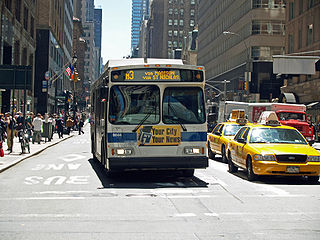 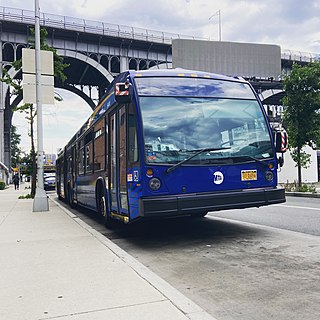 The Bx15 bus route is a public transit line in New York City that operates on the Third Avenue/125th Street Line between Fordham Plaza in the Bronx and Manhattanville in Manhattan. The full-length route runs along Third Avenue and Willis Avenue in the South Bronx, and along 125th Street in Harlem. On weekdays, some buses run a reduced version of the route between the Hub and Fordham Plaza in the Bronx.

Listen to this article (7 minutes)

This audio file was created from a revision of this article dated 28 June 2019 (2019-06-28), and does not reflect subsequent edits.
(Audio help  · More spoken articles)
This page is based on this Wikipedia article
Text is available under the CC BY-SA 4.0 license; additional terms may apply.
Images, videos and audio are available under their respective licenses.