Museum of Arts and Design

The Museum of Arts and Design in 2021

The Museum of Arts and Design (MAD), based in Manhattan, New York City, collects, displays, and interprets objects that document contemporary and historic innovation in craft, art, and design. In its exhibitions and educational programs, the Museum celebrates the creative process through which materials are crafted into works that enhance contemporary life.

The Museum first opened its doors in 1956 as the Museum of Contemporary Crafts, with an original mission of recognizing the craftsmanship of contemporary American artists. Nurtured by the vision of philanthropist and craft patron Aileen Osborn Webb, the Museum mounted exhibitions that focused on the materials and techniques associated with craft disciplines. From its earliest years, the Museum celebrated the changing roles of craftsmanship in society, served as an important advocate for emerging artists, and linked art to industry.

From 1963 to 1987, under the directorship of Paul J. Smith, the Museum presented dynamic and often participatory exhibitions that reflected the social currents of the era and broke down hierarchies in the arts with the celebration of popular culture and mundane materials. In 1979, the Museum reopened as the American Craft Museum in an expanded location at 44 West 53rd Street. To accommodate its ever-growing programming, the Museum relocated again in 1986 to its 18,000-square-foot home at 40 West 53rd Street, where it would remain until 2008.

The next ten years were a period of rapid growth and change, as the American Craft Council was restructured and the Museum and the Council were established as independent organizations. Holly Hotchner was appointed as director of the Museum in 1996, and served as director for 16 years until 2013. Hotchner initiated a comprehensive strategic planning process that expanded the Board of Trustees, curatorial staff, and exhibition and educational program. This process led to the Museum's name change, in 2002, to the Museum of Arts and Design to reflect the institution's increasingly interdisciplinary collections and programming. The continued growth of MAD's collections, public programs, and attendance resulted in its successful 2002 bid to the New York City Economic Development Corporation to acquire the building at 2 Columbus Circle.

The new building was designed by Brad Cloepfil of Allied Works Architecture, in September 2008. With its textured façade of glazed terra-cotta tile and fritted glass, the Jerome and Simona Chazen Building reflects MAD's craft heritage and permanent collections.

From 2013 to 2021, MAD had eleven directors, including six interim directors; this was an unusually high turnover rate compared to the directorships of other museums. [1] In September 2013, Dr. Glenn Adamson was appointed as the museum's new Nanette L. Laitman Director. [2] Previously a vocal critic of the museum, Adamson was characterized as a "bold choice" by the trustees. After a tenure of just over two years, Adamson stepped down from the post. [3] The next permanent director was Jorge Daniel Veneciano, who was appointed in August 2016 [4] and resigned after only five months. [5] Chris Scoates was appointed Director of the Museum in March 2018 and stepped down in August 2020. [6] Timothy R. Rodgers became MAD's director in 2021. [1]

The new location at 2 Columbus Circle, with more than 54,000 square feet (5,000 m2), more than tripled the size of the Museum's former space. It includes: four floors of exhibition galleries for works by established and emerging artists; a 150-seat auditorium in which the museum plans to feature lectures, films, and performances; and a restaurant. It also includes a Center for the Study of Jewelry, and an Education Center that offers multi-media access to primary source material, hands-on classrooms for students, and three artists-in-residence studios. 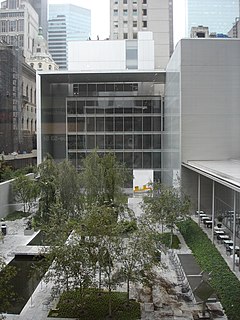 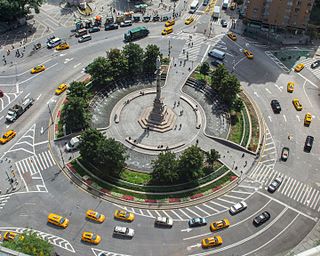 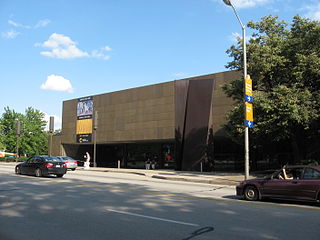 The Carnegie Museum of Art, abbreviated CMOA, is an art museum in the Oakland neighborhood of Pittsburgh, Pennsylvania. The museum was founded in 1895 by the Pittsburgh-based industrialist Andrew Carnegie. It was the first museum in the United States with a primary focus on contemporary art. As instructed by its founder at the inception of the Carnegie International in 1896, the museum has been organizing many contemporary exhibitions that showcase the "Old Masters of tomorrow". 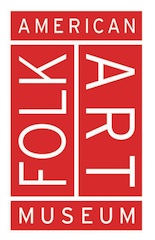 The American Folk Art Museum is an art museum in the Upper West Side of Manhattan, at 2, Lincoln Square, Columbus Avenue at 66th Street. It is the premier institution devoted to the aesthetic appreciation of folk art and creative expressions of contemporary self-taught artists from the United States and abroad.

2 Columbus Circle is a nine-story building on the south side of Columbus Circle in the Midtown Manhattan neighborhood of New York City. The building fills an entire city block bounded by 58th Street, Columbus Circle, Broadway, and Eighth Avenue. It was originally designed by Edward Durell Stone in the modernist style for A&P heir Huntington Hartford. In the 2000s, Brad Cloepfil redesigned 2 Columbus Circle for the Museum of Arts and Design (MAD), which has occupied the building since 2008.

The Institute of Contemporary Art or ICA is a contemporary art museum in Philadelphia. The museum is associated with the University of Pennsylvania, and is located on its campus. The Institute is one of the country's leading museums dedicated to exhibiting the innovative art of our time. Robert Chaney is its Director of Curatorial Affairs.

Public Art Fund is an independent, non-profit arts organization founded in 1977 by Doris C. Freedman. The organization presents contemporary art in New York City's public spaces through a series of highly visible artists' projects, new commissions, installations, and exhibitions that are emblematic of the organization's mission and innovative history.

John Axel Prip, also known as Jack Prip (1922–2009), was an American master metalsmith, industrial designer, and educator. He was known for setting standards of excellence in American metalsmithing. His works and designs have become famous for bringing together the formal, technical tradition of Danish design into harmony with the American desire for innovation. Several of his designs for the Reed and Barton Company are still in production today.

Holly Hotchner is the president and CEO of the National Women's History Museum.

Charles L. Venable is an American art curator and museum director. Early in his career, he published multiple articles and books on American art history, including on the history of silverware and furniture. Starting in 1986, Venable was a curator at the Dallas Museum of Art, before moving to the Cleveland Museum of Art in 2002, and the Speed Art Museum in 2007, where he served as the director. In 2012, Venable became the director of the Indianapolis Museum of Art, which was renamed to "Newfields" under a rebranding effort he initiated. Venable served as the head of the museum until 2021, when he stepped down from the role amidst calls for his removal.

James S. Snyder is executive chairman of the Jerusalem Foundation. An art historian and museum director, Snyder is director emeritus of the Israel Museum in Jerusalem and a senior fellow at the Middle East Initiative at the Harvard Kennedy School. 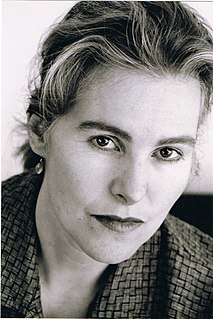 Catherine de Zegher is a Belgian curator and a modern and contemporary art historian. She has a degree in art history and archaeology from the University of Ghent.

Paul J. Smith was an arts administrator, curator, and artist based in New York. Smith was professionally involved with the art, craft, and design fields since the early 1950s and was closely associated with the twentieth-century studio craft movement in the United States. He joined the staff of the American Craftsmen's Council in 1957, and in 1963 was appointed Director of the Museum of Contemporary Crafts, a position he held for the next 24 years. In September 1987, he assumed the title of director emeritus and continued to work as an independent curator and consultant for museums, arts organizations, and collectors. 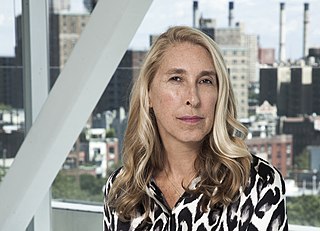 Lisa Phillips is an American museum director, curator, and author. She is the Toby Devan Lewis Director of the New Museum of Contemporary Art, in New York City. In 1999, Phillips became the second director in the museum's history, succeeding founding director Marcia Tucker. Prior to beginning her directorship at the New Museum, she worked at the Whitney Museum of American Art for twenty-three years.

Glenn Adamson is an American curator, author, and historian whose research and work focuses on the intersections of design, craft, and contemporary art. Adamson is currently Editor-at-Large of The Magazine Antiques, Editor of Journal of Modern Craft, and a freelance writer and curator. Adamson has held previous notable appointments as the Director of the Museum of Arts and Design, Head of Research at the Victoria and Albert Museum, and as Curator at the Chipstone Foundation.

Nanette L. Laitman was an art collector and philanthropist. She has been involved with the board of the Museum of Arts and Design (MAD) and its precursors in New York City for over 25 years. She became a member of the board in 1994 and board president in 2000. She was one of the main benefactors supporting MAD's relocation to 2 Columbus Circle in 2002. Laitman has also funded the Nanette Laitman Documentation Project for Craft and Decorative Arts in America at the Smithsonian's Archives of American Art.

Lloyd Eldred Herman is an American arts administrator, curator, writer, and museum planner who is an acknowledged expert on contemporary craft. He is known for being the founding Director of the Renwick Gallery of the Smithsonian American Art Museum in Washington D.C., from 1971 to 1986.