Japan Society is a non-profit organization formed in 1907 to promote friendly relations between the United States and Japan. Its headquarters was designed by Junzo Yoshimura and opened in 1971 at 333 East 47th Street near the United Nations. [5] With a focus on promoting "arts and culture, public policy, business, language, and education", the organization has regularly held events in its many facilities, including a library, art gallery, and theater, since its opening. [6] After suspending all activities during World War II, Japan Society expanded under the leadership of John D. Rockefeller III. [7]

In 1907, Tamemoto Kuroki and Goro Ijuin were chosen to represent Japan at the Jamestown Exposition. They attended a welcome dinner in New York City with Japanese ambassador to the United States, Shuzo Aoki, where there was talk of forming an organization to promote US-Japan relations in the city. Two days later at a luncheon held by Kuroki, Japan Society was born. The organization would be run by Aoki, then Honorary President of the Japan Society of the UK, and John Huston Finley. [8] [9] [10] Japan Society spent the next forty years hosting events in honor of Japanese royalty, giving annual lectures on a wide range of topics, and presenting art exhibits that drew in thousands of New Yorkers. In 1911, Lindsay Russell, another founding member of the society and later president, met with Emperor Meiji and spent his visit to Japan encouraging more societies to form there and throughout the United States. [8]

Japan Society was soon incorporated under New York law and finally found a home near one of Russell’s work offices, though it continued to relocate throughout its history before its current headquarters was opened in 1971. At this time, Japan Society and its members began to express interest in improving teaching about Japan in the United States. The organization began sponsoring trips to the country, publishing books, and sent a report to the Department of Education about the portrayal of Japan in American textbooks. [8]

In 1915, Dr. Takamine Jōkichi, a founding member of the Japan Society and the founder of the Nippon Club, hosted a diplomatic banquet in New York City to honor the visit of Baron Eiichi Shibusawa to the United States. This gathering was attended by Theodore Roosevelt and William Howard Taft. Also in attendance were many members of the Japan Society, including Japanese Consul-General K. Midzuno, M. Zumoto translator and secretary for Baron Shibusawa, who was also part owner and editor of The Japan Times, the financier Jacob Schiff, and John Huston Finley, president of City College, who was elected Japan Society’s first president. During this significant event there were discussions related to strengthening U.S. Japan relations and how best the U.S. and Japan could work together as allies during World War One. [11]

Japan Society remained active during World War I, operating as it had for the last seven years, but the organization became more political when it began associating with the Anti-Alien Legislation Committee, an advocacy group that spoke out against yellow peril. Russell and Hamilton Holt, another founding member, used the organization's publications to defend all of Japan's actions at the time. Unbeknownst to anyone at the time, even one of Japan Society's writers secretly worked for the Japanese government with the task of improving Japan’s image in the United States. The organization eventually realized the dangers of taking sides and by 1924 stopped publishing any political commentary. [8]

By the 1930s, membership had dropped significantly due to financial difficulties and the Second Sino-Japanese War. Following the attack on Pearl Harbor in 1941, Henry Waters Taft immediately resigned as president after serving from 1922 to 1929 and again from 1934. Russell also stepped down as one of Japan Society's directors. All activities were suspended and would not resume until the Treaty of San Francisco was signed in 1951. [8]

John D. Rockefeller III served as president from 1952 to 1969 and then as Chairman of the Board until his death in 1978. He accompanied John Foster Dulles on his trip to Japan that eventually led to the signing of the 1951 treaty. Rockefeller, a supporter of the Institute of Pacific Relations who visited Japan in 1929 during one of its conferences, wanted to contribute to bettering US–Japan relations after the war and believed there needed to be non-governmental organizations like Japan Society in each country in order for such friendly relations to exist. [8]

Under Rockefeller's leadership, Japan Society expanded and talk began to find a permanent headquarters for it. It shared offices with another Rockefeller-led organization, Asia Society, but as the two organizations continued to grow during the 1960s it became increasingly clear that Japan Society needed its own building. After receiving donations from Rockefeller and other members, construction began on "Japan House" in 1967. Designed by Junzo Yoshimura, whose work also includes Asia Society's headquarters, it became the first building in New York of contemporary Japanese architecture. On September 13, 1971, it was finally opened to the public after a ceremony attended by Prince Hitachi. He echoed Russell’s first words about Japan Society, calling for "closer people-to-people" contact between the countries. [8] [13] In 1970, Rockefeller was succeeded by Japan-born lawyer Isaac Shapiro, who served as president until 1977. [14]

The Trilateral Commission is a nongovernmental international organization aimed at fostering closer cooperation between Japan, Western Europe and North America. It was founded in July 1973 principally by American banker and philanthropist David Rockefeller, an internationalist who sought to address the challenges posed by the growing economic and political interdependence between the U.S. and its allies in North America, Western Europe, and Japan.

John Davison Rockefeller Jr. was an American financier and philanthropist, and the only son of Standard Oil co-founder John D. Rockefeller.

Edwin Oldfather Reischauer was an American diplomat, educator, and professor at Harvard University. Born in Tokyo to American educational missionaries, he became a leading scholar of the history and culture of Japan and East Asia. Together with George M. McCune, a scholar of Korea, in 1939 he developed the McCune–Reischauer romanization of the Korean language.

The Panic of 1907, also known as the 1907 Bankers' Panic or Knickerbocker Crisis, was a financial crisis that took place in the United States over a three-week period starting in mid-October, when the New York Stock Exchange fell almost 50% from its peak the previous year. Panic occurred, as it was during a time of economic recession, and there were numerous runs on banks and on trust companies. The 1907 panic eventually spread throughout the nation when many state and local banks and businesses entered bankruptcy. The primary causes of the run included a retraction of market liquidity by a number of New York City banks and a loss of confidence among depositors, exacerbated by unregulated side bets at bucket shops.

The United States Chamber of Commerce (USCC) is the largest lobbying group in the United States, representing over three million businesses and organizations. The group was founded in April 1912 out of local chambers of commerce at the urging of President William Howard Taft and his Secretary of Commerce and Labor Charles Nagel. It was Taft's belief that the "government needed to deal with a group that could speak with authority for the interests of business". 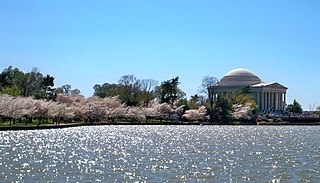 The National Cherry Blossom Festival is a spring celebration in Washington, D.C., commemorating the March 27, 1912, gift of Japanese cherry trees from Mayor Yukio Ozaki of Tokyo City to the city of Washington, D.C. Mayor Ozaki gave the trees to enhance the growing friendship between the United States and Japan and also celebrate the continued close relationship between the two nations. Large and colorful helium balloons, floats, marching bands from across the country, music and showmanship are parts of the Festival's parade and other events.

Shibusawa Eiichi, 1st Viscount Shibusawa was a Japanese industrialist widely known today as the "father of Japanese capitalism". He spearheaded the introduction of Western capitalism to Japan after the Meiji Restoration. He introduced many economic reforms including use of double-entry accounting, joint-stock corporations and modern note-issuing banks.

International relations between Japan and the United States began in the late 18th and early 19th century with the diplomatic but force-backed missions of U.S. ship captains James Glynn and Matthew C. Perry to the Tokugawa shogunate. Following the Meiji Restoration, the countries maintained relatively cordial relations. Potential disputes were resolved. Japan acknowledged American control of Hawaii and the Philippines, and the United States reciprocated regarding Korea. Disagreements about Japanese immigration to the U.S. were resolved in 1907. The two were allies against Germany in World War I.

The Asia Society is a non-profit organization that focuses on educating the world about Asia. It has several centers in the United States and around the world. These centers are overseen by the Society's headquarters in New York City, which includes a museum that exhibits the Rockefeller collection of Asian art and rotating exhibits with pieces from many countries in Asia and Oceania.

Prince Tokugawa Iesato was the first head of the Tokugawa clan after the overthrow of the Tokugawa bakufu, and a significant figure in Japanese politics and diplomacy during the Meiji, Taishō and early Shōwa period Japan. When Prince Tokugawa travelled to other nations representing Japan during his diplomatic journeys, he usually presented his name being Prince Iyesato Tokugawa. Prince Tokugawa held the influential position of president of Japan's upper house of congress the Diet for 30 years. Tokugawa promoted democratic principles and international goodwill. It was only after his passing in 1940 that Japanese militants were able to push Japan into joining the Axis Powers in WWII.

Henry Waters Taft was an American lawyer and author. He was the son of Alphonso and brother of President William Howard Taft. A renowned antitrust lawyer, he was a name partner at Cadwalader, Wickersham & Taft.

Dan Takuma was a Japanese businessman who was Director-General of Mitsui, one of the leading Japanese zaibatsu. He was a graduate of Massachusetts Institute of Technology and was married to the younger sister of statesman Kaneko Kentarō.

Frank Arthur Vanderlip Sr. was an American banker and journalist. He was president of the National City Bank of New York from 1909 to 1919, and Assistant Secretary of the Treasury from 1897 to 1901. Vanderlip is known for his part in founding the Federal Reserve System and for founding the first Montessori school in the United States, the Scarborough School and the group of communities in Palos Verdes, California.

Susan J. Pharr is an academic in the field of political science, a Japanologist, and Edwin O. Reischauer Professor of Japanese Politics, director of Reischauer Institute of Japanese Studies and the Program on U.S.-Japan Relations at Harvard University. Her current research focuses on the changing nature of relations between citizens and states in Asia, and on the forces that shape civil society over time. 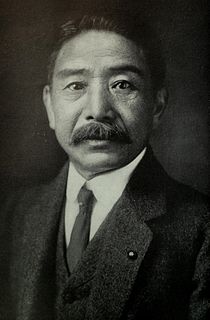 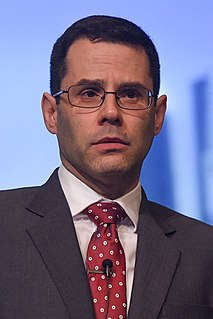 Michael Robert Auslin is an American writer, policy analyst, historian, and scholar of Asia. He is currently the Payson J. Treat Distinguished Research Fellow in Contemporary Asia at the Hoover Institution, Stanford University, a Senior Fellow in the Asia and National Security Programs at the Foreign Policy Research Institute, and a senior fellow at London's Policy Exchange. He was formerly an associate professor at Yale University and a resident scholar and director of Japanese studies at the American Enterprise Institute, a conservative think tank in Washington, D.C. 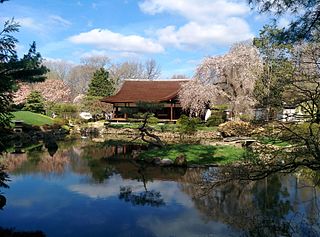 Shofuso , also known as Japanese House and Garden, is a traditional 17th century-style Japanese house and garden located in Philadelphia's West Fairmount Park on the site of the Centennial Exposition of 1876. Shofuso is a nonprofit historic site with over 30,000 visitors each year and is open to the public for visitation and group tours.

The Garden Club of America is a nonprofit organization made up of around 18,000 club members and 200 local garden clubs around the United States. Founded in 1913, by Elizabeth Price Martin and Ernestine Abercrombie Goodman, it promotes the recording and enjoyment of American gardens as well as conservation and horticulture.