In 1909, the Cosmos Club formed as a club for governesses, leasing space in the Gibson Building on East 33rd Street. [2] The following year, the club became the Women's Cosmopolitan Club, "organized," according to The New York Times, "for the benefit of New York women interested in the arts, sciences, education, literature, and philanthropy or in sympathy with those interested." [3] The club incorporated on March 22, 1911, [4] with Helen Gilman Brown as its president. [5] The other founding members were Abby Aldrich Rockefeller, Edith Carpenter Macy (Mrs. V. Everit Macy), Adele Herter (Mrs. Albert Herter), Mrs. E. R. Hewitt, Mrs. John Sherman Hoyt, and Mrs. Ellwood Hendrick. [6] Dues were $20 a year.

Early notable members included novelists Willa Cather and Ellen Glasgow, violinist Kathleen Parlow, sculptor Anna Hyatt, dancer Adeline Genée, philanthropist Grace Dodge, and Elizabeth Clift Bacon Custer, the widow of General George Armstrong Custer. In 1913, club members put on "An Evening in a Persian Garden," with snake dancers and readings of Persian verse. The success of the fête led to an increase in membership, and in 1914 the club moved to larger quarters at 44th Street and Lexington Avenue, shortening its name to the Cosmopolitan Club.

By 1917, the club had 600 members, with another 400 on its waiting list. [7] In December of that year, the club put on an exhibition of paintings by Pablo Picasso. [8] Guest speakers in that era included poets Amy Lowell, Vachel Lindsay, and Siegfried Sassoon, educator Maria Montessori, and First Lady Lou Henry Hoover.

In 1932, the club moved to its current home, a ten-story brick building with white marble trim and wrought-iron balconies, situated at 122 East 66th Street, across the street from the Seventh Regiment Armory. The architect Thomas Harlan Ellett designed the new clubhouse, for which the Architectural League gave him its 1933 gold medal, [9] calling his design "a fresh and personal interpretation, beautiful in its simplicity of form and material." [10] In the years following its construction, the club invited numerous musicians to perform, including Sergei Prokofiev, Nadia Boulanger, Count Basie and Lotte Lenya, and invited numerous luminaries to speak, including the poet Robert Frost and the journalists Dorothy Thompson and Edward R. Murrow.

According to its current (2018) website, "for over a century" the club has been "a gathering place where women of accomplishment enjoy each other's company and pursue their interest in arts and letters, and current events." [1] The club has a dress code; among other strictures, the wearing of blue jeans and running shoes is prohibited. [11]

Willa Sibert Cather was an American writer known for her novels of life on the Great Plains, including O Pioneers!, The Song of the Lark, and My Ántonia. In 1923, she was awarded the Pulitzer Prize for One of Ours, a novel set during World War I.

Albert Herter was an American painter, illustrator, muralist, and interior designer. He was born in New York City, studied at the Art Students League with James Carroll Beckwith, then in Paris with Jean-Paul Laurens and Fernand Cormon.

Nelson Wilmarth Aldrich was a prominent American politician and a leader of the Republican Party in the United States Senate, where he represented Rhode Island from 1881 to 1911. By the 1890s, he was one of the "Big Four" key Republicans who largely controlled the major decisions of the Senate, along with Orville H. Platt, William B. Allison, and John Coit Spooner. Because of his impact on national politics and central position on the pivotal Senate Finance Committee, he was referred to by the press and public alike as the "general manager of the Nation", dominating tariff and monetary policy in the first decade of the 20th century. 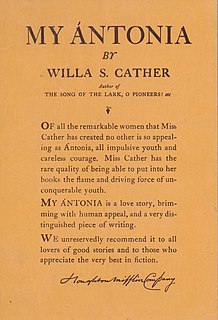 My Ántonia is a novel published in 1918 by American writer Willa Cather, considered one of her best works.

The Colony Club is a women-only private social club in New York City. Founded in 1903 by Florence Jaffray Harriman, wife of J. Borden Harriman, as the first social club established in New York City by and for women, it was modeled on similar clubs for men. Today, men are admitted as guests.

"Paul's Case" is a short story by Willa Cather. It was first published in McClure's Magazine in 1905 under the title "Paul's Case: A Study in Temperament", which was later shortened. It also appeared in a collection of Cather's stories, The Troll Garden (1905). For many years "Paul's Case" was the only one of her stories that Cather allowed to be anthologized. 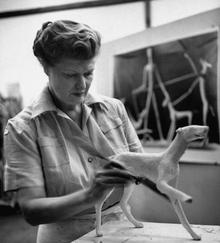 Mary Callery was an American artist known for her Modern and Abstract Expressionist sculpture. She was part of the New York School art movement of the 1940s, 1950s and 1960s.

Elizabeth Shepley Sergeant was an American journalist and writer. 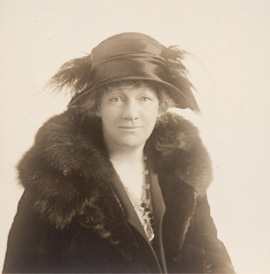 Lizzie Plummer Bliss, known as Lillie P. Bliss, was an American art collector and patron. At the beginning of the 20th century, she was one of the leading collectors of modern art in New York. One of the lenders to the landmark Armory Show in 1913, she also contributed to other exhibitions concerned with raising public awareness of modern art. In 1929, she played an essential role in the founding of the Museum of Modern Art. After her death, 150 works of art from her collection served as a foundation to the museum and formed the basis of the in-house collection. These included works by artists such as Paul Cézanne, Georges Seurat, Paul Gauguin, Henri Matisse, Pablo Picasso and Amedeo Modigliani.

Thomas Harlan Ellett was an architect who practiced in New York City. 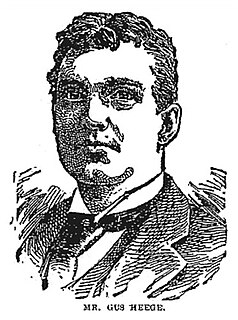 Augustus J. "Gus" Heege was an American playwright and actor, whose works were popular at the end of the 19th century. 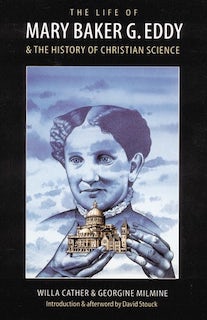 The Life of Mary Baker G. Eddy and the History of Christian Science (1909) is a highly critical account of the life of Mary Baker Eddy, the founder of Christian Science, and the early history of the Christian Science church in 19th-century New England. It was published as a book in November 1909 in New York by Doubleday, Page & Company. The original byline was that of a journalist, Georgine Milmine, but a 1993 printing of the book declared that novelist Willa Cather was the principal author; however, this assessment has been questioned by more recent scholarship which again identifies Milmine as the primary author, although Cather and others did significant editing. Cather herself usually wrote that she did nothing more than standard copy-editing, but sometimes that she was the primary author.

Georgine Milmine Welles Adams best known as Georgine Milmine, was a Canadian-American journalist most known for writing about Mary Baker Eddy, the founder of Christian Science. Milmine, along with Willa Cather and others, worked on 14 investigative articles about Eddy that were published by McClure's in 1907–1908. One of the only major investigative works on Eddy to be published in her lifetime, besides Sibyl Wilbur's Human Life articles, the articles were instigated by Milmine: S. S. McClure purchased her freelance research before assigning a group of reporters to verify, expand and write it up.

The Abby Aldrich Rockefeller Sculpture Garden is an outdoor courtyard at the Museum of Modern Art in Manhattan, New York City. Designed by notable architect Philip Johnson, the courtyard was conceived at the same time as Johnson's West Wing annex for the museum. Construction began in the spring on 1952 and was completed in April 1953.

The Best Years is a short story by Willa Cather, first published after her death in the collection The Old Beauty and Others in 1948. It is her final work, and was intended as a gift to her brother, Roscoe Cather, who died as it was being written. Set in Nebraska and the northeastern United States, the story takes place over twenty years, tracing the response of Lesley Ferguesson's family to her death in a snowstorm.