Those Kinds of Things

"Those Kinds of Things" is the first episode of the sixth season of Showtime TV series Dexter . It was aired on October 2, 2011 and attracted 2.19 million viewers in the US. [1]

Dexter is shown writhing in pain. He calls 911 and requests paramedics for what he says is a stab wound. It turns out that it was all a part of his plan to trap two specific paramedics who have been letting patients die so that their organs can be harvested and sold for huge profits on the local black market. Dexter then charges up a defibrillator and shocks each paramedic until they're both dead.

A year after Rita's death, Dexter's life is back to normal, or at least as normal as his life gets. Batista's sister Jamie has become Harrison's babysitter, and she takes care of Harrison whenever Dexter is away from home. Dexter and Debra visit a Catholic pre-school which they plan on having Harrison attend.

Back at Miami Metro, María LaGuerta is promoted to captain. It is revealed that LaGuerta blackmailed Deputy Chief Matthews, whose name was on a prostitute's ledger, to give her the promotion. Vince Masuka has taken up the responsibility of teaching a group of forensic science students, eventually hiring Ryan Chambers as his intern. Batista and Laguerta have divorced, but remain friends. Meanwhile, Dexter attends his high school reunion on the suspicion that the high school quarterback had murdered his wife, whom Dexter remembers fondly (she had been one of the few people to treat Dexter with kindness during high school), and is surprised to find himself getting along with his former classmates, with Trisha Billings, a very attractive woman who used to copy Dexter's answers in class, giving him a "thank you" in the form of oral sex. After obtaining the quarterback's blood and finding a perfect DNA match from the wife's murder scene records (from underneath her fingernails), Dexter realizes his instincts were right all along. He later traps the man, is not impressed with his rationalizations for the murder, and kills him.

Quinn prepares to propose to Debra, only to be interrupted by a shooter in the restaurant. Debra exchanges fire with the perpetrator and then tackles him, making her a local hero.

This episode introduces the season's primary antagonists, Travis Marshall and Professor Gellar, two serial killers who base their murders on passages from the Book of Revelation; they believe they have been chosen by God to bring about the apocalypse. They kill a fruit vendor, replace his intestines with snakes, and stitch him with a symbol of alpha and omega.

The episode received mixed to generally positive reviews from critics. The A.V. Club gave the episode a B− grade, stating "“Those Kinds of Things” wasn’t much of an episode. "The opening scene was terrific, though it was a bit disappointing to see that it wasn’t legitimate in medias res, just the double execution of a pair of organ harvesting EMTs to establish that for Dexter, it’s back to business as usual. He’s back in the bachelor pad, which is now massive since he’s purchased the apartment next to his". [2]

IGN gave the episode an 8/10 rating, commenting "'Those Kinds of Things' set things up neatly and right now Dexter and the major villains are in separate corners. At this point, six years in, this isn't landmark stuff though. For everyone who's come in and out of Dexter's life, and whose somewhat disposable characters were supposed to 'play a role in his evolution,' the Bay Harbor butcher still seems mostly un-evolved. Especially considering all those who might feel that this episode is a "return to form". Still, it's always a good thing when Dexter Morgan pops back up in our lives and every new season comes scented with a lovely hint of macabre merriment." [3]

Debra Charlotte Morgan is a fictional character created by Jeff Lindsay for his Dexter book series. She also appears in the television series, based on Lindsay's books, portrayed by Jennifer Carpenter. In Lindsay's novels, she first appeared in Darkly Dreaming Dexter and was featured in every novel in the series. Debra is the sister of the series' antihero protagonist Dexter Morgan.

"Born Free" is the twelfth episode of season one and first-season finale of the American television drama series Dexter, which aired on December 17, 2006 on Showtime in the United States. The episode also aired on May 4, 2008 on CTV in Canada; on May 14, 2008 on FX in the UK; on September 28, 2008 on Channel Ten in Australia; and on March 21, 2011 on STAR World in India. The episode was written by Daniel Cerone and executive producer Melissa Rosenberg, and was directed by Michael Cuesta. Based on the novel Darkly Dreaming Dexter by Jeff Lindsay, the season featured many differences to the original source, mainly in the lead-up to and revelation of the identity of the "Ice Truck Killer". The episode received critical acclaim.

"Return to Sender" is the sixth episode of the first season of the American television drama series Dexter, which first aired on November 5, 2006 on Showtime in the United States. The episode was written by Timothy Schlattmann and was directed by Tony Goldwyn. In the episode, Dexter Morgan investigates a murder scene where one of his own victims has returned after he disposed of the body. Meanwhile, his girlfriend Rita Bennett tries to prevent her husband Paul from attending their daughter's birthday party, and Lt. María LaGuerta considers adopting a young witness of the murder whom she finds at the crime scene.

"Let's Give the Boy a Hand" is the fourth episode of the first season of the American television drama series Dexter. It premiered on October 22, 2006 on Showtime in the United States. The episode was written by Drew Z. Greenberg and directed by Robert Lieberman. The Ice Truck Killer starts leaving body parts of his latest victim at locations related to Dexter's childhood, making him confront his dark personal history. Meanwhile Rita confronts a neighbor with a noisy dog that is keeping her children up at night. Lieutenant LaGuerta seeks to comfort the mother of the latest Ice Truck Killer victim and the pressure on Sergeant Doakes escalates when Guerrero's associates begin following him.

Captain María Esperanza di Alma LaGuerta portrayed by Lauren Vélez, is a fictional character who is the Lieutenant at the fictitious Miami-Metro Homicide Departmentin the Showtime television series Dexter. Despite being a protagonist for most of the series, Maria LaGuerta, ultimately emerges as one of the story's main antagonists by Season 7. 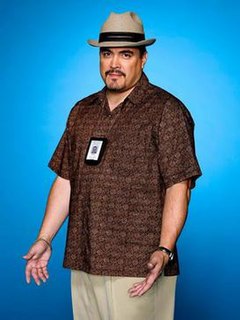 Angelo "Angel" Juan Marcos Batista is a fictional character in the Showtime television series Dexter and the novels by Jeff Lindsay upon which it is based. He is portrayed in the television series by David Zayas. Batista spends much of the series as a Sergeant before being promoted to Lieutenant in the final season.

Joseph "Joey" Quinn is a fictional character in the Showtime television series Dexter, portrayed by Desmond Harrington. Quinn is a cop who transferred to the Homicide division after being in narcotics before season three.

"Crocodile" is the 2nd episode of season one of Showtime TV series Dexter. The episode centers on the death of a police officer, Ricky Simmons, and the Miami Metro Police Department's attempt at bringing in the killer. In the meantime, Dexter stalks his next victim, Matt Chambers, a man who kills people by running them over while drunk.

"Hello, Dexter Morgan" is the 11th and penultimate episode of the fourth season of Showtime TV series, Dexter, which aired on December 6, 2009. The police team attempt to get Christine Hill to talk while Dexter frames another man in order to get Arthur Mitchell, the Trinity Killer, all to himself.

"The Big One" is the fifth season finale of the American television drama series Dexter, and the 60th overall episode of the show. It originally aired on Showtime on December 12, 2010. In the episode, Dexter attempts to save Lumen from Jordan Chase, as his sister, Debra, comes closer to uncovering the truth in her investigation. Meanwhile, Quinn falls under suspicion for Dexter's murder of Stan Liddy.

The sixth season of Dexter premiered on October 2, 2011, on the television cable network Showtime, and consisted of 12 episodes. The season follows Dexter's and Miami Metro's investigations into a string of bizarre ritualistic killings featuring overtly religious apocalyptic symbolism. On November 18, 2011, it was announced that Dexter had been renewed for two more seasons.

"This Is the Way the World Ends" is the twelfth and final episode of the sixth season of the Showtime television series Dexter. It premiered on Showtime on December 18, 2011. In this episode, Dexter finally confronts the Doomsday Killer, Travis Marshall.

"What's Eating Dexter Morgan?" is the third episode of the eighth season of the Showtime television series Dexter. The episode originally aired on July 14, 2013. It was directed by Ernest Dickerson and written by executive producer Lauren Gussis, who have both worked on the series for several years.

"Are You...?" is the first episode of the seventh season of the Showtime television series Dexter and the seventy-third episode overall. The episode originally aired on September 30, 2012. It was directed by John Dahl and written by newly appointed showrunner Scott Buck.

"There's Something About Harry" is the tenth episode of the second season and twenty-second overall episode of the American television drama series Dexter, which first aired on 2 December 2007 on Showtime in the United States. The episode was written by Scott Reynolds and was directed by Steve Shill.

"Sins of the Father" is the tenth and final episode of the American television miniseries Dexter: New Blood, a continuation of the series Dexter. The episode was written by Clyde Phillips from a story by Phillips, Alexandra Franklin and Marc Muszynski and directed by executive producer Marcos Siega. It originally aired on Showtime on January 9, 2022, being also available on its streaming service at midnight on the same day.

"H Is for Hero" is the fourth episode of the American television miniseries Dexter: New Blood, a continuation of the series Dexter and the 100th overall episode of the series. The episode was written by supervising producer Tony Saltzman and directed by Sanford Bookstaver. It originally aired on Showtime on November 28, 2021, being also available on its streaming service at midnight on the same day.