A thrackle is an embedding of a graph in the plane, such that each edge is a Jordan arc and every pair of edges meet exactly once. Edges may either meet at a common endpoint, or, if they have no endpoints in common, at a point in their interiors. In the latter case, the crossing must be transverse . [1]

A linear thrackle is a thrackle drawn in such a way that its edges are straight line segments. Every linear thrackle has at most as many edges as vertices, a fact that was observed by Paul Erdős. Erdős observed that, if a vertex v is connected to three or more edges vw, vx, and vy in a linear thrackle, then at least one of those edges lies on a line that separates two other edges; without loss of generality assume that vw is such an edge, with x and y lying in opposite closed halfspaces bounded by line vw. Then, w must have degree one, because no other edge than vw can touch both vx and vy. Removing w from the thrackle produces a smaller thrackle, without changing the difference between the numbers of edges and vertices. On the other hand, if every vertex has at most two neighbors, then by the handshaking lemma the number of edges is at most the number of vertices. [2] Based on Erdős' proof, one can infer that every linear thrackle is a pseudoforest. Every cycle of odd length may be arranged to form a linear thrackle, but this is not possible for an even-length cycle, because if one edge of the cycle is chosen arbitrarily then the other cycle vertices must lie alternatingly on opposite sides of the line through this edge.

Micha Perles provided another simple proof that linear thrackles have at most n edges, based on the fact that in a linear thrackle every edge has an endpoint at which the edges span an angle of at most 180°, and for which it is the most clockwise edge within this span. For, if not, there would be two edges, incident to opposite endpoints of the edge and lying on opposite sides of the line through the edge, which could not cross each other. But each vertex can only have this property with respect to a single edge, so the number of edges is at most equal to the number of vertices. [3]

As Erdős also observed, the set of pairs of points realizing the diameter of a point set must form a linear thrackle: no two diameters can be disjoint from each other, because if they were then their four endpoints would have a pair at farther distance apart than the two disjoint edges. For this reason, every set of n points in the plane can have at most n diametral pairs, answering a question posed in 1934 by Heinz Hopf and Erika Pannwitz. [4] Andrew Vázsonyi conjectured bounds on the number of diameter pairs in higher dimensions, generalizing this problem. [2]

In computational geometry, the method of rotating calipers can be used to form a linear thrackle from any set of points in convex position, by connecting pairs of points that support parallel lines tangent to the convex hull of the points. [5] This graph contains as a subgraph the thrackle of diameter pairs. [6]

The diameters of the Reinhardt polygons form linear thrackles. An enumeration of linear thrackles may be used to solve the biggest little polygon problem, of finding an n-gon with maximum area relative to its diameter. [7]

Can a thrackle have more edges than vertices?

John H. Conway conjectured that, in any thrackle, the number of edges is at most equal to the number of vertices. Conway himself used the terminology paths and spots (for edges and vertices respectively), so Conway's thrackle conjecture was originally stated in the form every thrackle has at least as many spots as paths. Conway offered a $1000 prize for proving or disproving this conjecture, as part of a set of prize problems also including Conway's 99-graph problem, the minimum spacing of Danzer sets, and the winner of Sylver coinage after the move 16. [8]

It has been proven that every cycle graph other than C4 has a thrackle embedding, which shows that the conjecture is sharp. That is, there are thrackles having the same number of spots as paths. At the other extreme, the worst-case scenario is that the number of spots is twice the number of paths; this is also attainable.

The thrackle conjecture is known to be true for thrackles drawn in such a way that every edge is an x-monotone curve, crossed at most once by every vertical line. [3]

Lovász, Pach & Szegedy (1997) proved that every bipartite thrackle is a planar graph, although not drawn in a planar way. [1] As a consequence, they show that every thrackleable graph with n vertices has at most 2n − 3 edges. Since then, this bound has been improved several times. First, it was improved to 3(n − 1)/2, [10] and another improvement led to a bound of roughly 1.428n. [11] Moreover, the method used to prove the latter result yields for any ε > 0 a finite algorithm that either improves the bound to (1 + ε)n or disproves the conjecture. The current record is due to Fulek & Pach (2017), who proved a bound of 1.3984n. [12]

If the conjecture is false, a minimal counterexample would have the form of two even cycles sharing a vertex. [9] Therefore, to prove the conjecture, it would suffice to prove that graphs of this type cannot be drawn as thrackles. 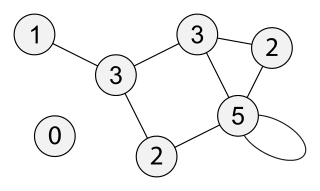 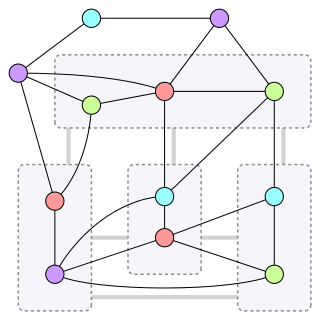 Planarity is a puzzle computer game by John Tantalo, based on a concept by Mary Radcliffe at Western Michigan University. The name comes from the concept of planar graphs in graph theory; these are graphs that can be embedded in the Euclidean plane so that no edges intersect. By Fáry's theorem, if a graph is planar, it can be drawn without crossings so that all of its edges are straight line segments. In the planarity game, the player is presented with a circular layout of a planar graph, with all the vertices placed on a single circle and with many crossings. The goal for the player is to eliminate all of the crossings and construct a straight-line embedding of the graph by moving the vertices one by one into better positions. 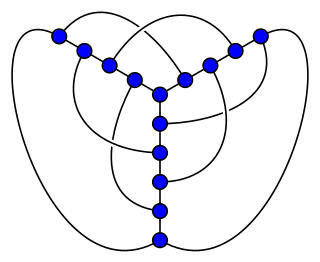 In graph theory, the planar separator theorem is a form of isoperimetric inequality for planar graphs, that states that any planar graph can be split into smaller pieces by removing a small number of vertices. Specifically, the removal of vertices from an -vertex graph can partition the graph into disjoint subgraphs each of which has at most vertices. 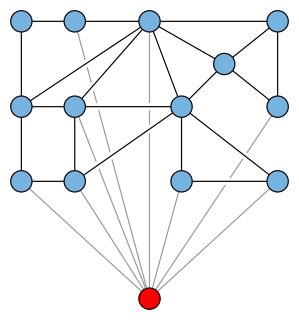 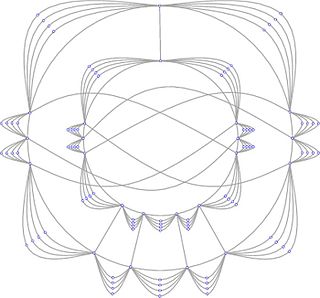 In graph drawing, a universal point set of order n is a set S of points in the Euclidean plane with the property that every n-vertex planar graph has a straight-line drawing in which the vertices are all placed at points of S.

In geometric graph theory, a penny graph is a contact graph of unit circles. That is, it is an undirected graph whose vertices can be represented by unit circles, with no two of these circles crossing each other, and with two adjacent vertices if and only if they are represented by tangent circles. More simply, they are the graphs formed by arranging pennies in a non-overlapping way on a flat surface, making a vertex for each penny, and making an edge for each two pennies that touch.