Three forks, locally known as Three Forks Muddy Gap, was named from its location at a fork in the road. [2] First settled in 1935 when Highway 287 was built. Local Rancher, Robert L. Tully built a small filling station. Then in his sixties, Tully decided to retire from ranching, selling off much of his original homestead to pay for the construction of the station.

Wyoming PBS is the Public Broadcasting Service (PBS) member network in the state of Wyoming. It currently consists of flagship KCWC-DT, channel 4 in Riverton ; full-power satellites KWYP-DT, channel 8 in Laramie and KPTW, channel 6 in Casper; and over 35 low-power translator stations across the state.

Fort Fetterman was a wooden fort constructed in 1867 by the United States Army on the Great Plains frontier in Dakota Territory, approximately 11 miles northwest of present-day Douglas, Wyoming. Located high on the bluffs south of the North Platte River, it served as a major base for the start of several United States military expeditions against warring Native American tribes. The main role of the soldiers was to protect European-American pioneers on the Bozeman Trail. The fort is listed on the National Register of Historic Places.

There are several lakes named Mud Lake within the U.S. state of Wyoming. 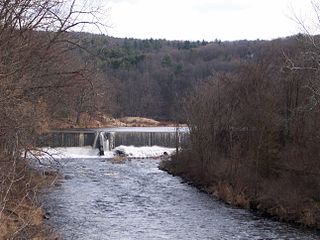 KLLE is located in the North Fork, California, area and broadcasts in the Fresno area at 107.9 FM known as "Zona Mx". It is owned by Univision, and broadcasts a regional Mexican format. Prior to its current format, it broadcast a Spanish adult contemporary format and before that, a format known as "Raggaeton", a Hispanic form of reggae, along with a mix of hip hop under the same calls of "KLLE".

Freedom is an unincorporated community in both northeastern Caribou County, Idaho, and northwestern Lincoln County, Wyoming in the United States; the Wyoming portion of the community is also a census-designated place (CDP). The population was 214 at the 2010 census.

Fort McKinney (1877–1894) was a military post located in North Eastern Wyoming, near the Powder River.

The English River Dene Nation is a Dene First Nation band government in Patuanak, Saskatchewan, Canada. Their reserve is in the northern section of this Canadian province. Its territories are in the boreal forest of the Canadian Shield. This First Nation is a member of the Meadow Lake Tribal Council (MLTC). 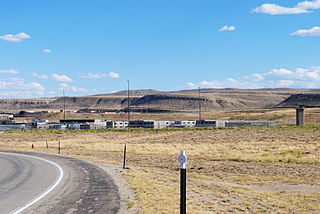 The Wyoming State Penitentiary is a historic and current prison in Rawlins, Carbon County, Wyoming, which has operated from 1901. It moved within Rawlins to a new location in 1981. In 2018, it is a Wyoming Department of Corrections state maximum-security prison for men.

Muddy Gap is an unincorporated community in Carbon County, Wyoming, United States. Muddy Gap and nearby Three Forks are sometimes referred to as one and the same place.