Three Out Change is the debut studio album by Supercar. Released on April 1, 1998, it peaked at number 20 on the Oricon Albums Chart. [3] The album helped establish Supercar as an important and influential Japanese rock band. [4] Music critic Ian Martin has described it as an "epic indie rock/shoegaze album" and "one of the all-time great Japanese rock albums." [5]

All lyrics are written by Junji Ishiwatari; all music is composed by Koji Nakamura.

Credits adapted from the liner notes. 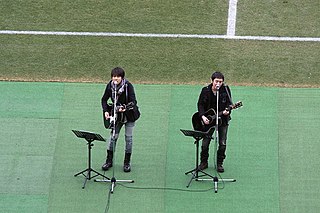 Yuzu (ゆず) is a Japanese pop rock duo who debuted in 1997. Its members are Yūjin Kitagawa and Kōji Iwasawa. Both of the band members come from Yokohama in Kanagawa Prefecture, and attended Okamura Junior High School. Their songs "Hyōri Ittai", "Reason", and "Nagareboshi Kirari" were used as ending themes of the 2011 anime series Hunter × Hunter.

Anzen Chitai is a Japanese rock band, formed in 1973 by five musicians in Asahikawa, Hokkaidō, Japan. It debuted in 1982 in Tokyo, Japan. They became one of Japan's most successful rock bands in the 1980s.

Come Taste The Band is the tenth studio album by the English rock band Deep Purple, originally released in October 1975. It was co-produced and engineered by the band and longtime associate Martin Birch.

Pierrot was a Japanese visual kei rock band formed in 1994 in Nagano. After changing their name from Dizy-Lizy to Pierrot and several member changes, the final lineup was completed in 1995 with Kirito on vocals, Jun and Aiji on guitar, Kohta on bass and Takeo on drums. After roughly ten years together, Pierrot disbanded in 2006. Their final single was named "Hello", an apt title for a band who started their major career with an album called Finale. 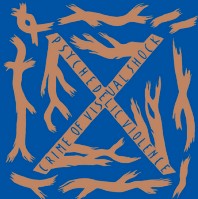 Blue Blood is the second studio album by Japanese rock band X Japan, then known as simply X. It was released on April 21, 1989, by CBS/Sony as the band's major label debut. Blue Blood sold more than 700,000 copies, reached number 6 on the Oricon chart and stayed on the chart for more than 100 weeks. The album's singles would also reach the top five on the chart. In 2007, Rolling Stone Japan ranked Blue Blood number 15 on their list of the "100 Greatest Japanese Rock Albums of All Time".

Supercar was a Japanese rock band active from 1995 to 2005, and who made their debut in 1997. Consisting of composer and vocalist Kōji Nakamura, lyricist and guitarist Junji Ishiwatari, bassist Miki Furukawa, and drummer Kōdai Tazawa, Supercar is best known for combining alternative rock with electronic music and has been characterized as having an "almost foundational importance to 21st century Japanese indie rock". Internationally, Supercar is also known for providing much of the soundtrack for the Japanese film Ping Pong, as well as being featured in the anime series Eureka Seven. 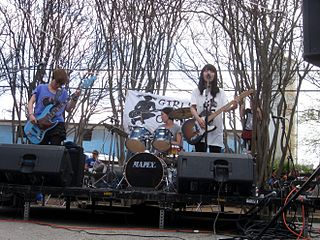 chatmonchy was a three-piece all-female rock band which consisted of Eriko Hashimoto, Akiko Fukuoka, and formerly Kumiko Takahashi who are from Tokushima Prefecture on the island of Shikoku, Japan.

Outrage is a Japanese thrash metal band, formed in Nagoya in 1982. They made their debut in 1987 with a lineup of Yosuke Abe on guitar, Yoshihiro Yasui on bass, Shinya Tange on drums and Naoki Hashimoto on vocals. Hashimoto left the band in 1999, but the group continued as a three piece and he returned in 2007. With a career spanning over three decades, Outrage are one of few Japanese metal bands to have never disbanded or paused activities.

Koji Nakamura is a Japanese musician who is most famous for being the lead singer/songwriter in the Japanese band Supercar. His music style in general involves drone-like guitar riffs and mixed in raw electronica. He presently records music under the names iLL and Nakamura Koji, and also participates in a band called Lama.

Miki Furukawa is a Japanese musician. From 1995 to 2005 she was the bass player and vocalist of the indie rock band Supercar. She released her first solo record in 2006.

Circus is the debut studio album by Japanese musician and actress Chiaki Kuriyama, which was released on March 16, 2011. Kuriyama collaborated with famous Japanese and overseas rock musicians to create the album. In January 2012, the album was re-released as a deluxe edition, featuring the single "Tsukiyo no Shōzō" and its B-side "Seishun no Matataki""

Junji Ishiwatari is a Japanese musician, songwriter and record producer. He is also famous for being a guitarist of the Japanese band Supercar.

"Neverland" is a song by South Korean rock band F.T. Island. It is their seventh single under Warner Music Japan and tenth single overall in Japan. The song was written by Junji Ishiwatari and composed by Youwhich, Daichi and Choi Jong Hun. It was released on April 18, 2012, in three editions: CD and DVD, CD-only and Lawson Edition. The single debuted at number 10 on the Oricon weekly chart and at number 13 on the Billboard Japan Hot 100. The single went on to sell over 30,500 copies in Japan. 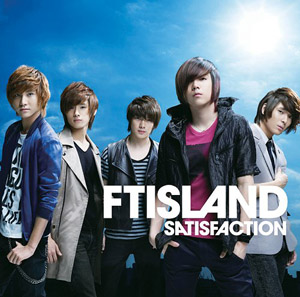 "Satisfaction" is a song by South Korean rock band F.T. Island. It is their fourth single under Warner Music Japan and seventh single overall in Japan, and is included on their second Japanese studio album Five Treasure Island. The song was written by Junji Ishiwatari and composed by Hiroki Horiko. It was released on April 20, 2011, in three editions: a CD-only edition, and limited editions A and B. The single debuted at number two on the Oricon weekly chart and went on to sell over 43,000 copies in Japan.

Jump Up is the second studio album by Supercar. It was released on March 10, 1999. It peaked at number 12 on the Oricon Albums Chart.

Frederic (フレデリック) is a Japanese rock band from Kobe formed in 2009. The band is signed to A-Sketch Music Label and has, as of 2015, released 4 EPs and multiple singles. In 2015, Frederic won the Kansai block local award at the 7th CD Shop Awards for their album oddloop. This album was released on September 24, 2014 and was also their debut at a major record label.

Kensuke Ushio is a Japanese composer, rock and EBM musician who performs under the moniker agraph..