The threespot grunter (Hephaestus trimaculatus) is a species of freshwater ray-finned fish in the family Terapontidae. It is endemic to Papua New Guinea, where it is found only in the Laloki River near Port Moresby living in rock pools in the lower part of the river. The eggs are guarded and fanned by the male. [2]

The Chinese paddlefish, also known as Chinese swordfish, is a reportedly extinct species of fish that was native to the Yangtze and Yellow River basins in China. At maturity, the species measured an average length of 3 m (9.8 ft), making it one of the largest species of primarily freshwater fishes. It was the only species in the genus Psephurus and one of two living species in the paddlefish family (Polyodontidae), the other being the American paddlefish. It was an anadromous species, meaning that it spent part of its adult life at sea, while migrating upriver to spawn. Unlike its close relative, the Chinese paddlefish was largely piscivorous, and mainly preyed on small to medium-sized fish.

Grunters or tigerperches are ray-finned fishes in the family Terapontidae. This family is part of the superfamily Percoidea of the order Perciformes. 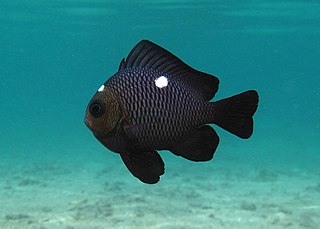 The threespot dascyllus, also known as the domino damsel or simply domino, is a species of damselfish from the family Pomacentridae. It is native to the Indo-Pacific from the Red Sea and East Africa, to the Pitcairn Islands, southern Japan, and Australia. Its grey to black body has two lateral white spots and one between the eyes like domino hence the name; the threespot dascyllus grows up to 13 cm in length. Coloration is somewhat variable; the spot on the forehead may be absent and the lateral spots very much reduced. It feeds on algae, copepods and other planktonic crustaceans.

Verduya's hap is a species of haplochromine cichlid which is endemic to Lake Malawi where it has a lake wide range and so is found in Malawi, Mozambique, and Tanzania. This species occurs in open water, sometimes forming large shoals.

Adamson's grunter is a species of freshwater ray-finned fish, a grunter from the family Terapontidae which is endemic to Lake Kutubu in the Kikori River system, Papua New Guinea.

The long-nose sooty grunter is a species of fish in the family Terapontidae. It is endemic to Australia.

The striped grunter is a species of freshwater ray-finned fish, a grunter from the family Terapontidae. It is found only in the Bewani Mountains in the headwaters of the Pual River system in Papua New Guinea and the upper Sermowai River, Western new Guinea, Indonesia. It is found in high altitude, fast flowing mountains streams. The males guard and fan the eggs. 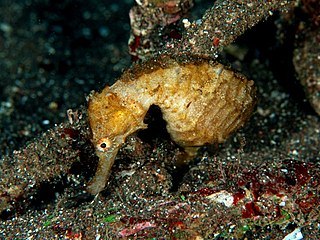 The flat-faced seahorse, longnose seahorse, low-crowned seahorse or three-spot seahorse is a species of fish in the family Syngnathidae. It is found in Australia, Cocos (Keeling) Islands, French Polynesia, Hong Kong, India, Indonesia, Japan, the Philippines, Singapore, Taiwan, Thailand, and Vietnam. Its natural habitat is shallow seas. It is threatened by habitat loss. 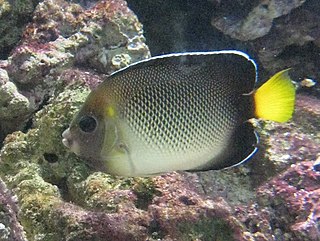 Threespot barb is a species of cyprinid fish in the large genus Enteromius. It has a wide distribution in sub-Saharan Africa from the Congo Basin east to the Indian Ocean coast of Tanzania and south to KwaZulu Natal in South Africa. It occurs in shallow water around river inflows or near swampy areas. It is a habitat generalist and also hardy, but it prefers vegetated areas. It feeds on insects and other small animals. It is often caught for use as bait by anglers fishing for tigerfish. It breeds during the summer rainy season when shoals of fertile adults migrate upstream when the rivers are in spate following rain. A single females may produce as many as 8,000 eggs.

Triplophysa orientalis is a species of stone loach. It is a freshwater fish from the Tibetan Plateau and is endemic to China; its distribution includes the upper reaches of the Yangtze and Yellow Rivers, among others. It lives in a wide range of habitats, both lentic and lotic. The species is widespread but populations tend to be isolated and show high degree of genetic divergence. 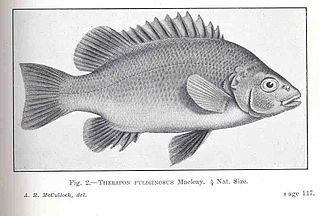 The sooty grunter, also known by the name black bream, blubberlips, Northern grunter or purple grunter, is a species of freshwater ray-finned fish, a grunter from the family Terapontidae. It inhabits coastal and inland freshwater creeks and rivers of northern Australia. 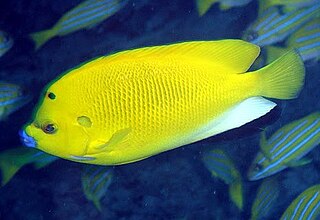 Apolemichthys trimaculatus, the threespot angelfish or flagfin angelfish, is a demersal marine ray-finned fish, a marine angelfish belonging to the family Pomacanthidae. It has a wide Indo-Pacific distribution.

Hephaestus carbo, the coal grunter or black grunter, is a species of freshwater ray-finned fish, a grunter from the family Terapontidae. It is endemic to rivers in northern Australia. 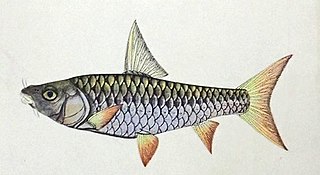 Hippocampus dahli is a fish species of the family Syngnathidae. It is endemic to the Australian northeastern coast, from Darwin to Brisbane, where it inhabits estuarine channels and rubble or soft substrates to depths of 21 metres (69 ft). Little is known of its feeding habits, but it is likely to feed on small crustaceans such as copepods, amphipods, and gammarid, caprellid, and caridean shrimps, similar to other seahorses. This species is ovoviviparous, with males carrying eggs in a brood pouch before giving birth to live young. This species is not listed in FishBase and many authorities treat it as a synonym of Hippocampus trimaculatus. 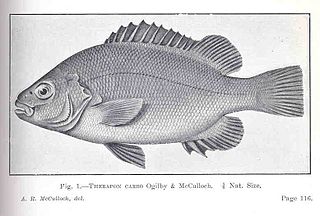 Hephaestus is a genus of freshwater ray-finned fish, grunters from the family Terapontidae.