The airfield was opened in 1942 as RAF Thruxton. Postwar, it was reopened by the Wiltshire School of Flying in 1947, [2] and private and club flying operations continue to the present time.

Thruxton Aerodrome has a CAA Ordinary Licence (Number P544) that allows flights for the public transport of passengers or for flying instruction as authorised by the licensee, Western Air (Thruxton) Limited. [3]

Motorbike racing began on a track using the runways and perimeter roads in 1950. Thruxton Circuit, which follows the line of the perimeter road, has been used for motorbike and car racing since 1968. [4]

Many air cadets were trained here on Flying Scholarships and gained their PPLs. The training was carried out by the Wiltshire School of Flying on DH.82 Tiger Moth and Jackaroo aircraft[ citation needed ]. 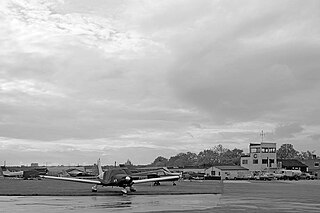 Fairoaks Airport is an operational general aviation airport by the A319 between Chobham and Ottershaw in Surrey, England. It is 2 NM north of the major town of Woking and for passengers is 2.8 miles (4.5 km) from Junction 11 of the M25 motorway which is between the M3 and A3 junctions.

Thruxton is just off the A303 road five miles (8.0 km) west of Andover. It is a village with a Manor House, thatched cottages and village green. Pillhill Brook runs from Thruxton Down through the grounds of the Manor House and along the village street to Mullen's Pond, a natural habitat for many species of migratory birds and wild plants. 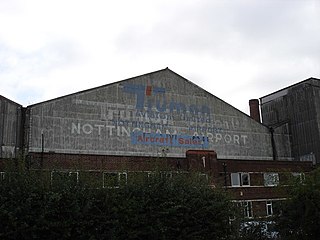 Nottingham Airport, also known as Nottingham City Airport, is located in Tollerton, Nottinghamshire, England. It is situated 3 nautical miles south east of Nottingham City Centre, and signposted on the A52 at Trent Bridge and on the A606—this makes it one of the closest airports to a city centre in the UK. The aerodrome is equipped for private aviation, business aviation and flight instruction.

Stapleford Aerodrome is an operational general aviation aerodrome in the Epping Forest district of Essex, England, near the village of Abridge. It is about 3.4 nautical miles south of North Weald Airfield and 4.5 NM north of Romford. The airfield is just within the M25, close to the junction with the M11.

Thruxton Motorsport Centre is a motor-racing circuit located near the village of Thruxton in Hampshire, England which hosts motorsport events including British Touring Cars and Formula 3 racing. It is often referred to as the "Fastest Circuit in the UK" where drivers can reach speeds of over 300 km/h (190 mph) and has earnt the reputation of being a true driver's track. To illustrate this, Damon Hill drove his Williams Formula One car around the circuit at an average speed of 147 mph in 1993.

Retford Gamston Airport is a small English airport, located 2 NM south of Retford and close to Gamston, Bassetlaw, Nottinghamshire. It is used mainly for small private aircraft as well as a base for several private flying schools. Two AOC based operators IAS Medical and Diamond Executive Aviation are also based on the airfield. 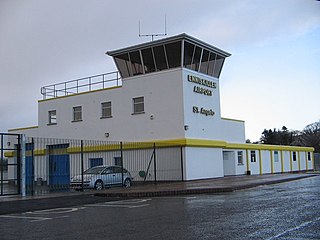 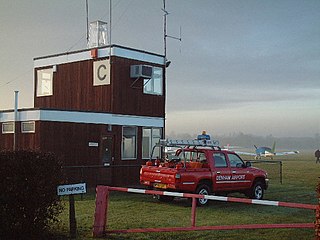 Denham Aerodrome is an operational general aviation aerodrome located 1.5 NM east of Gerrards Cross, near Denham, Buckinghamshire, England. It lies beneath London's Class D airspace. VFR entry/exit points are at Maple Cross (CHT) and St Giles Church. Entry lanes and circuit height are at 1,000 ft (300 m) MSL. It has one paved runway, aligned 06/24, a grass runway also aligned 06/24 which is referred to as the northside grass and one grass runway aligned 12/30. It also has substantial hangarage. 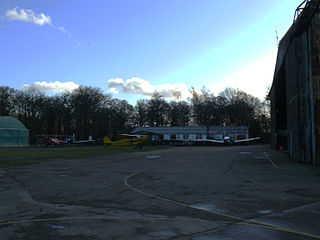 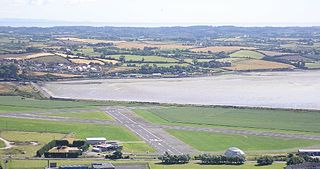 Newtownards Airport is a local airfield in Newtownards, County Down, Northern Ireland. It is located 8.5 NM east of Belfast. This airport not only offers light aircraft flights but offers Helicopter flights which are operated by HeliPower. This airport also has an onsite restaurant called Cloud Nine. 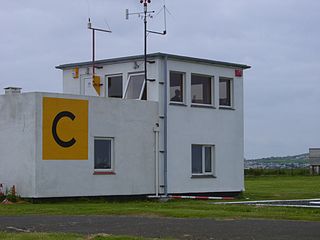 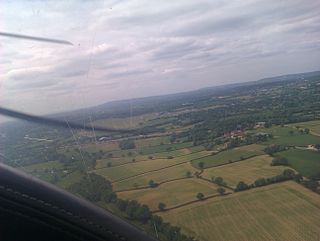 Netherthorpe Aerodrome is located 2 NM west by north of Worksop, Nottinghamshire, England. The aerodrome is in the Metropolitan Borough of Rotherham close to the village of Thorpe Salvin.

Turweston Aerodrome located near the village of Turweston, in north Buckinghamshire near the Northamptonshire border. It is a former Royal Air Force Second World War bomber training facility, now a business park and airfield which is home to the Light Aircraft Association. 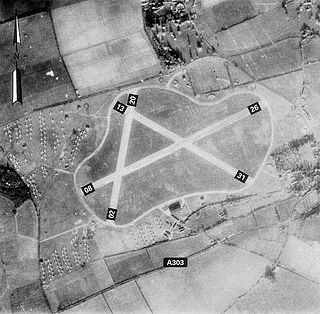 Wycombe Air Park, also known as Booker Airfield, is an operational general aviation aerodrome located in Booker, Buckinghamshire, 2.4 nautical miles south-west of High Wycombe, England. The airfield celebrated its 50th year of opening on 25 April 2015. It originally opened in 1941 as RAF Booker and was primarily involved in training during World War II, remaining a military establishment until 1965.

Headcorn Aerodrome is a private airfield in Kent, England. The airfield is located 8 NM south of Maidstone; about 32 miles (51 km) southeast of London.