Thulli Vilayadu is a 2013 Tamil comedy thriller film written and directed by Vincent Selva [1] and produced by D. Govindaraj. The film features mewcomer Yuvaraj, Deepthi Nambiar, Soori, and Sendrayan in the lead roles. Prakash Raj and Jayaprakash play important roles with comic shades. [2] Srikanth Deva has scored the music, while S. K. Boopathy has cranked the camera and V. T. Vijayan did the film's editing. The film released on 28 June 2013. [3]

Raghu (Yuvaraj), Mano (Soori), and Thangavelu (Sendrayan) are faithful for politicians Singam (Prakash Raj) and Samipillai (Jayaprakash). Both politicians are fighting for 200 million rupees, which is meant to be used to bribe the people for the upcoming elections. in the meantime, the three men decide to jump in this and take it for their advantage. The men decide to go to Rajasthan to hide. On their trip, they meet a girl named Yamuna (Deepthi Nambiar), who is claimed to be Asin's younger sister. What is the next part of the chapter?

The soundtrack is composed by Srikanth Deva, collaborating with Vincent Selva for the fourth time. Director Mysskin, who earlier worked as an assistant director for Vincent Selva, had sung one of the songs. [4] The audio was launched on 8 March 2013 by actor Vijay. [5]

The film was released on 28 June 2013 alongside Annakodi . The film took a poor opening and grossed only ₹3.44714 lakh (US$4,800) in first week. [6] The film opened with 78 shows on its first weekend in Chennai box office. It was removed after one week. It sold 3,800 tickets in Chennai during its lifetime. 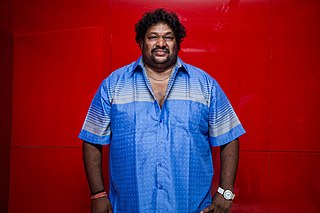 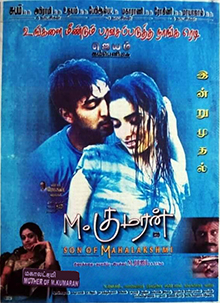 M. Kumaran Son of Mahalakshmi is a 2004 Indian Tamil-language sports drama film directed by M. Raja, starring Jayam Ravi, Asin, Nadhiya, and Prakash Raj in the lead roles while Vivek and Subbaraju play supporting roles. The film's score and soundtrack are composed by Srikanth Deva. The film was emerged as a blockbuster and one of the most profitable movies of 2004. It is a remake of the Telugu film Amma Nanna O Tamila Ammayi. 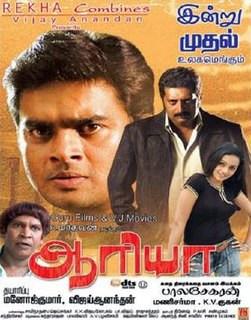 Aarya is a 2007 Indian Tamil-language romantic comedy film directed by Balasekaran and produced by Manoj Kumar. The film starred Madhavan and Bhavana in the lead roles, while Prakash Raj, Vadivelu and Tejashree appear in supporting roles. The film's music was composed by Mani Sharma, and the venture had a theatrical release across Tamil Nadu in August 2007.

Thotta is a 2008 Tamil action film directed by Selva and produced by Mariappa Babu Baskar of Oscar Movies. The movie, which has a critically acclaimed storyline, stars actor Jeevan and Priyamani in the lead roles alongside Mallika, Sampath Raj, Hema Choudhary and Charan Raj in supporting roles.

Singam is a 2010 Indian Tamil-language action film written and directed by Hari, and produced by K. E. Gnanavel Raja under his Studio Green banner in association with Reliance Big Pictures, and distributed by Sun Pictures. It stars Suriya in the lead role, marking his 25th film, with Anushka Shetty, Prakash Raj and Vivek in other lead roles. It is the first installment in the Singam franchise. The film was released on 28 May 2010. 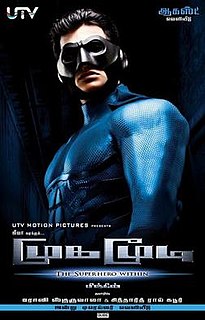 Mugamoodi is a 2012 Indian Tamil-language superhero film written and directed by Mysskin that features Jiiva, Pooja Hegde and Narain in lead roles, while Girish Karnad, Nassar, and Selva play supporting roles. It is the first Tamil superhero movie. The film is about a man who cannot tolerate injustice and corruption and hence turns into a vigilante to fight against it for a better society. This film was dedicated to Bruce Lee. With mixed critical response the film was released on 31 August 2012, along with its dubbed Telugu version titled Mask. It has also been dubbed in Hindi as Mahabali Ek Super Hero. 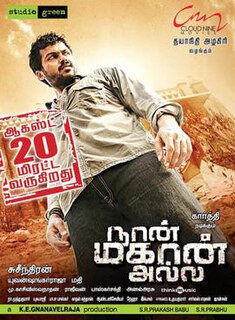 Yuddham Sei is a 2011 Indian Tamil-language neo-noir film written and directed by Mysskin. It stars director Cheran and debutant Dipa Shah in the lead roles alongside an ensemble cast including Y. G. Mahendra, Lakshmi Ramakrishnan, Jayaprakash, and Selva in supporting roles. The film was released on 4 February 2011 and was remade in Kannada as Gharshane.

Pillaiyar Theru Kadaisi Veedu is a 2011 Tamil-language romantic drama film written and directed by newcomer Thirumalai Kishore and starring Jithan Ramesh along with Sanchita Padukone. Suhasini, Jayaprakash, Prakash Raj, Soori, and Bose Venkat play supporting roles. The film is the 81st from Ramesh's home production Super Good Films. The score was by Telugu composer Chakri in his debut and only Tamil film he had worked so far. The film released on 24 June 2011.

Vaanam is a 2011 Indian Tamil-language action drama film written and directed by Krish. It is the Tamil remake of his own Telugu film Vedam (2010). It features an ensemble cast of Silambarasan, Bharath, Anushka Shetty, Prakash Raj, Saranya, Sonia Agarwal, and Santhanam. The score and soundtrack were composed by Yuvan Shankar Raja, while cinematography and editing were handled by Nirav Shah and Anthony Gonsalves, respectively. The film, jointly produced by VTV Ganesh and R. Ganesh under VTV Productions and Magic Box Pictures, respectively was distributed by Dayanidhi Azhagiri's Cloud Nine Movies.

Paagan is a 2012 Indian Tamil comedy film directed by debutante Mohammed Aslam, who was an associate to Ameer Sultan. It stars Srikanth and Janani Iyer in the lead roles. Kovai Sarala plays an important role in this film. James Vasanthan composed the film's score.

Vincent Selva is a noted film director and screenwriter associated with Tamil film industry. This director is best known for his debut flick, Priyamudan starring Vijay, Kausalya. Other directors such as Mysskin and S. P. Jananathan worked under him.

Deepthi Nambiar is an Indian film actress, who mainly works in the Tamil and Malayalam film industries. She is best known for her small romantic role as "Pooja" in the 2011 Tamil film Engaeyum Eppothum. Pattalam first introduced her to the Tamil audience as an actress.

Nambiyaar is a 2016 Tamil language comedy film written and directed by Ganeshaa in his directorial debut. It stars Srikanth and Sunaina in the lead roles alongside comedian Santhanam in the title character. Produced by Srikanth's home production Golden Friday Films and independent producer, Haresh Vikram Vijayakumar (Malaysia), the film is named after the veteran actor M. N. Nambiar who was famous for his villainous roles in yester-year Tamil cinema. Vijay Antony scored the soundtrack and original scores for the film. Despite beginning production during early 2013, the film went through delays before releasing in August 2016.

Moodar Koodam is a 2013 Tamil black comedy film written, produced and directed by Naveen. The film stars the director himself alongside Sendrayan, Kuberan, and Rajaji in lead roles. Oviya, Anupama Kumar, Jayaprakash, Five Star Krishna, and Uday Mahesh play other pivotal roles. The film was produced by director Naveen himself under the "White Shadows Productions" banner with Pandiraj releasing the movie through his Pasanga Productions. The music is by Natarajan Sankaran. This film received positive reviews. This film is loosely based on the 1999 South Korean crime-comedy film Attack the Gas Station.

Singam is an Indian Tamil-language action-drama film series centered around the character Singam, an honest police officer who aims to eliminate corruption from the society. The film series began in 2010 with the release of Singam, directed by Hari and starring Surya Sivakumar as the titular character; it received positive reviews and grossed ₹90 crore worldwide. The first film also spawned two direct sequels: Singam II (2013), and Si3 (2017).

Thalaivasal is a 1992 Tamil drama film directed by Selva. The film features an ensemble cast consisting of S. P. Balasubrahmanyam, Anand, Sivaranjani, Bhanu Prakash, Nassar, Napoleon and newcomer Vijay in lead roles. The film, produced by Chozha Ponnurangam, had musical score by Bala Bharathi and was released on 3 September 1992. 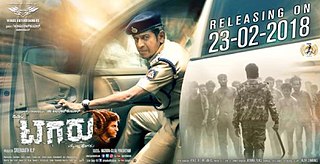 Tagaru is a 2018 Indian Kannada-language action film directed by Duniya Soori and produced by K. P. Srikanth. It features Shiva Rajkumar, Bhavana and Manvitha in the lead roles along with Dhananjay, Vasishta N. Simha and Devaraj in key supporting roles. Shivakumara Swami of the Sree Siddaganga Mutt appears for three seconds in the film while lyricist Jayanth Kaikini and composer Charan Raj make a guest appearance in a song sequence.

Arthana Binu is an Indian film actress, who appears in Tamil, Malayalam, and Telugu Film Industry. Hailing from Thiruvananthapuram, Kerala, she made her debut in the 2016 Telugu film Seethamma Andalu Ramayya Sitralu. She is known for films such as Mudhugauv (2016), Thondan (2017), Semma (2018) and Kadaikutty Singam (2018). She is the daughter of actor Vijayakumar, who was active during the early 1990s.