Thump Records is a record label specialized in various genres of music. Founded by Bill Walker and Al Lopez for $10,000. In 1997 Bill Walker became its sole C.E.O. and President.

Thump's success was ignited by the popularity of its Old School and Low Rider compilation series (co-branded with Low Rider Magazine [1] ). Thump's Distributor is major label Universal, [2] and Thump has also signed many artists under its own banner. Tierra gained hit The Intruders' 1967 song "Together", written by Gamble & Huff, which reached #18 on the Billboard Hot 100 [3] [4] [5] from Boardwalk Records, and later Tierra joined Thump Records.

Aztlan Underground is a band from Los Angeles, California that combines Hip-Hop, Punk Rock, Jazz, and electronic music with Chicano and Native American themes, and indigenous instrumentation. They are often cited as progenitors of Chicano rap. 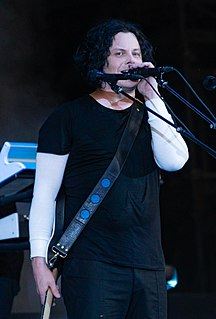 John Anthony White is an American singer, songwriter, multi-instrumentalist and producer. He is best known as the lead singer and guitarist of the duo the White Stripes. White has enjoyed consistent critical and popular success and is widely credited as one of the key artists in the garage rock revival of the 2000s. He has won 12 Grammy Awards, and all three of his solo albums have reached number one on the Billboard charts. Rolling Stone ranked him number 70 on its 2010 list of "The 100 Greatest Guitarists of All Time". David Fricke's 2010 list ranked him at number 17.

Mike Varney is an American musician, record producer, music publisher and impresario. He is the founder of the Shrapnel Label Group, which includes Shrapnel Records, Tone Center Records and Blues Bureau International. He also has a 50% stake in Magna Carta Records, a New York-based label. Varney is often credited with being the individual most responsible for popularizing the mid-1980s shred guitar boom, and has continuously specialized in producing musicians within the genres of instrumental rock, hard rock, jazz, jazz fusion, blues, blues-rock, progressive metal and speed metal.

Sunn O))) is an American experimental metal band formed in 1998 in Seattle, Washington, US. The band is known for their distinctive visual style and slow, heavy sound, which blends diverse genres including doom metal, drone, black metal, dark ambient, and noise rock, as well as for their loud live performances.

Timo Maas is a German DJ/producer and remixer whose career in electronic music spans well over 30 years. His remix of Azzido Da Bass's single "Dooms Night" helped launch his career in 2000.

KRDC is a broadcast radio station licensed to Pasadena, California, serving the Greater Los Angeles Area. The station is owned and operated by The Walt Disney Company. The KRDC broadcast license is held by ABC Radio Los Angeles Assets, LLC.

Tierra is an American Latin R&B band, originally from Los Angeles, California, United States, that was first established in 1972 by former El Chicano members Rudy Salas (guitar) and his brother Steve Salas (vocals). The other original members were Rudy "Bub" Villa, Bobby Navarrete (reeds), Joey Guerra (keyboards), Steve Falomir, Philip Madayag (drums), and Andre Baeza (percussion). Their biggest hit was the 1980 remake of The Intruders' 1967 hit "Together", written by Gamble & Huff, which reached No. 18 on the Billboard Hot 100, and No. 9 on the US Billboard R&B chart. It was a number one record on Los Angeles radio. 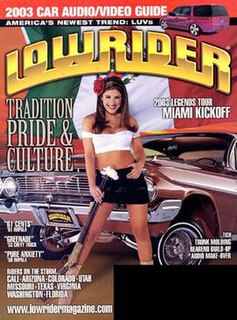 "Low Rider" is a song written by American funk band War and producer Jerry Goldstein, which appeared on their album Why Can't We Be Friends?, released in 1975. It reached number one on the Billboard R&B singles chart, peaked at number seven on the Hot 100 singles chart, and number five in Canada.

Brown-eyed soul, also referred to as Chicano soul, is soul music performed in the United States mainly by Latinos in Southern California, East Los Angeles, and San Antonio (Texas) during the 1960s, continuing through to the early 1980s. The trend of Latinos started with Latino rock and roll and rock musicians. "Brown eyed soul" contrasts with blue-eyed soul, soul music performed by non-Latino white artists. 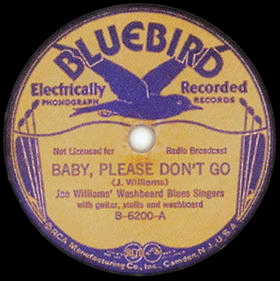 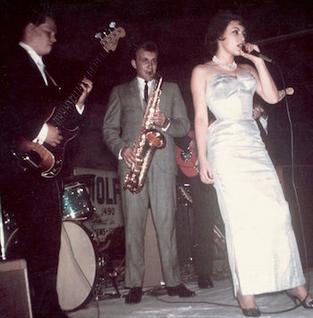 Rosie and the Originals were an American 1960s musical group best known for their single "Angel Baby." Fronted by lead singer Rosie Hamlin, the group produced two singles for Highland Records and, like many other musicians of the era, ended up in protracted legal battles with their record label over royalties and credits. 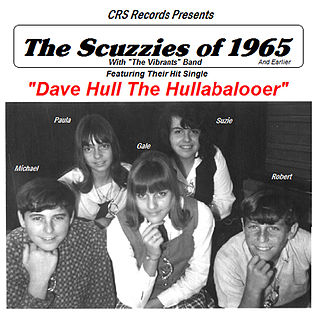 The Scuzzies were a mid-1960s recording and performing group of 5 teen cousins from the South Bay, Los Angeles area of California. The group gained notoriety for recording a song, written by group leader Suzie Cappetta, entitled "Dave Hull The Hullabalooer" in the winter of 1964. The song was a tribute to a popular Los Angeles Disc Jockey Dave Hull, AKA "The Hullabalooer" who worked at KRLA, a 50,000 watt AM radio station in South Pasadena, California. Hull was more recently named one of the top ten greatest broadcasters in Los Angeles radio history.

Rudy Salas was a musician who was a member of the group El Chicano. He was also the co-founder of the L.A. Latin R&B band, Tierra. Along with his brother Steve, he was a major part of the Eastside sound from the mid 1960s.

"Together" is a 1967 song originally recorded and performed by The Intruders. The song reached number 48 on the U.S. Billboard Hot 100 and spent nine weeks on the chart. It was their second of 14 chart hits.