Thurgoona is an outer suburb of the regional city of Albury in southern New South Wales, Australia. The suburb is located in the City of Albury local government area.

The first land release in Thurgoona was St Johns Hill in 1978, followed by St Jones Green in 1980, Corrys Wood in 1981, St Hilaire in 1985 and THurgoona Park in 1986. The 1980s were a time of massive growth and development in Thurgoona. Thurgoona Drive and Elizabeth Mitchell Driver were completed by 1982, connecting Thurgoona to Albury via the Hume and Riverina Highways. Soon after the Thurgoona Golf Club opened its first 9 holes in 1983, followed by a further 9 holes in 1985. In 1986 the Albury-Wodonga Corporation moved its headquarters to Thurgoona. By 1989, a hotel had opened at the golf course, a new shopping centre was under construction, Thurgoona Public School opened and the Thurgoona Industrial Park opened near the Albury Airport. [3] 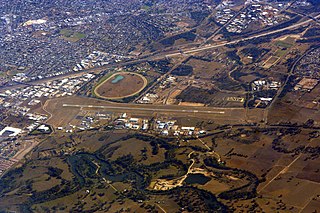 In March 2010 Thurgoona saw the opening of a new Thurgoona Plaza, with Woolworths, a Hume Bank branch and many other new shops. New shops include a tandoori restaurant, hairdressing salon, pizza shop, pharmacy, butcher, bakery, two cafés and a Thai takeaway restaurant.

Hume Bank is an Australian bank. Headquartered in Albury, New South Wales, it is a customer-owned bank that started as a building society in 1955. Its business focus is on retail banking and assisting local economic development.

In late 2015, a local resident took a photograph of a giant goanna scaling the wall of his house. The photograph was featured in national media [4]

Permaculture is a set of design principles centered on whole systems thinking, simulating, or directly utilizing the patterns and resilient features observed in natural ecosystems. It uses these principles in a growing number of fields from regenerative agriculture, rewilding, and community resilience.

Charles Sturt University purchased land at Thurgoona in 1993 from the Albury-Wodonga Development Corporation to the value of $6 million. Then in April 1997 construction began on the new Thurgoona campus. Originally, it was established as a secondary campus to the Albury campus, however by 2010 that campus closed and the Thurgoona campus had been developed into their sole Albury campus. During late 2010, a new dentistry and oral health campus were completed behind the Thurgoona Plaza. [6]

The town has an Australian Rules football team competing in the Tallangatta & District Football League, a league based mainly in Victoria.

Thurgoona is located to the east of the Hume Freeway and to the north-east of the Albury CBD.

Thurgoona is known for a relatively large network of Box Gum Grassy Woodlands that used to cover most of the New South Wales Southern Slopes. The nature corridors within Thurgoona maintained and developed by the local community and the former Albury-Wodonga Development Corporation in the 1980s and 1990s, has allowed habitats to sustain local wildlife.

While the area is home to over 100 species of birds, it is also home to many threatened species. These include Sloane’s Froglet, Regent Honeyeater, and the Squirrel Glider (Petaurus norfolcensis). Squirrel Gliders are listed as threatened in NSW and Thurgoona is home to a significant population of the arboreal (tree-dwelling) mammal. [7]

At the 2016 Census, the population of Thurgoona was 8,656. The most common religion was Catholic, followed by no religion, and the average weekly household income was $1,618, above the Australian average of $1,438. The median age was 32 below the national average of 38. [8]

Albury–Wodonga is the broad settlement incorporating the twin Australian cities of Albury and Wodonga, which are separated geographically by the Murray River and politically by a state border: Albury on the north of the river is part of New South Wales while Wodonga on the south bank is in Victoria.

Wodonga is a city on the Victorian side of the border with New South Wales, 300 kilometres (190 mi) north-east of Melbourne, Australia. It is located wholly within the boundaries of the City of Wodonga LGA. Its population is approximately 35,100 and is separated from its twin city in New South Wales, Albury, by the Murray River. Together, the two cities form an urban area with an estimated population of 93,603. 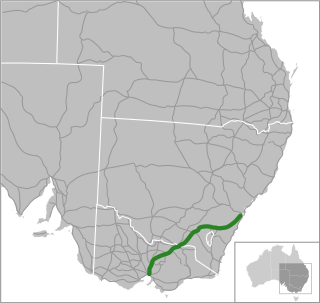 The Hume Highway, inclusive of the sections now known as the Hume Freeway and Hume Motorway, is one of Australia's major inter-city national highways, running for 840 kilometres (520 mi) between Melbourne in the southwest and Sydney in the northeast. Upgrading of the route from Sydney's outskirts to Melbourne's outskirts to dual carriageway was completed on 7 August 2013.

Hume Dam, formerly the Hume Weir, is a major dam across the Murray River downstream of its junction with the Mitta River in the Riverina region of New South Wales, Australia. The dam's purpose includes flood mitigation, hydro-power, irrigation, water supply and conservation. The impounded reservoir is called Lake Hume, formerly the Hume Reservoir. It is a gated concrete gravity dam with four earth embankments and twenty-nine vertical undershot gated concrete overflow spillways. 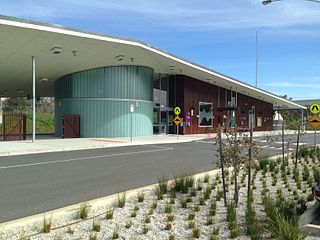 Wodonga railway station is located on the North East line in Victoria, Australia. It serves the city of Wodonga opening on 25 June 2011 as part of the Wodonga Rail Bypass project.

The Olympic Highway is a rural road in the central western and south-eastern Riverina regions of New South Wales, Australia. The 318-kilometre (198 mi) highway services rural communities and links the Hume Highway with the Mid-Western Highway and provides part of an alternate road link between Sydney and Albury via Bathurst and Cowra as well as servicing Wagga Wagga, linking with the Sturt Highway. 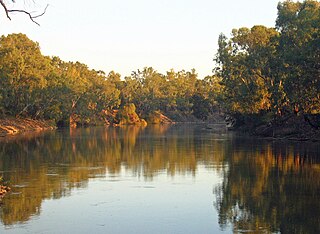 The Riverina is an agricultural region of South-Western New South Wales (NSW), Australia. The Riverina is distinguished from other Australian regions by the combination of flat plains, warm to hot climate and an ample supply of water for irrigation. This combination has allowed the Riverina to develop into one of the most productive and agriculturally diverse areas of Australia. Bordered on the south by the state of Victoria and on the east by the Great Dividing Range, the Riverina covers those areas of New South Wales in the Murray and Murrumbidgee drainage zones to their confluence in the west. 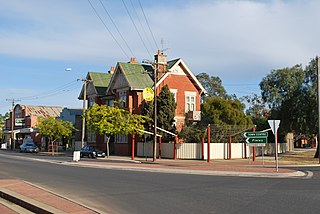 The Riverina Highway is a 220-kilometre (140 mi)-long state highway located in the Riverina region of New South Wales, Australia. The road was constructed over several decades with final asphalt concrete sealing completed during the 1960s.

Lavington is the largest suburb of the city of Albury, New South Wales, located north of the Albury Central Business District. At the 2016 census, Lavington had a population of 12,472. Lavington is a mostly flat area near Nail Can Hill to the west, and is bordered by Thurgoona to the east, Hamilton Valley to the west, Springdale Heights to the north, and North Albury to the south. Lavington is mostly residential, but has significant rural areas in the north-west and a commercial area. Features include Lavington Square Shopping Centre, Lavington Swim Centre, Jelbart Park and 5 schools . Lavington is the second major centre of the City of Albury, with its own commercial CBD. 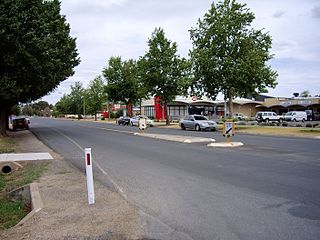 Jindera is a town in the South West Slopes section of the Riverina region of New South Wales, Australia. The town is situated in the Greater Hume Shire local government area, 15 kilometres (9.3 mi) north of the regional centre of Albury. At the 2011 census, Jindera had a population of 1,809 residents.

Mullengandra is a village community in the south east part of the Riverina. It is situated by road, about 7 kilometres north east of Bowna and 8 kilometres south west of Woomargama. The town is on the Hume Highway north of Albury.

East Albury is a suburb of the city of Albury, New South Wales, located 3 kilometres (2 mi) east of the Albury Central Business District. At the 2006 census, East Albury had a population of 5686.

South Albury is a suburb of the city of Albury, New South Wales, located 3 kilometres (2 mi) south of the Albury Central Business District. At the 2006 census, South Albury had a population of 1102.