Electorates of the Australian states and territories

State electoral districts do not apply to the Upper House, or Legislative Council, in those states that have one (New South Wales, South Australia, Tasmania, Victoria and Western Australia). In New South Wales and South Australia, MLCs represent the entire state, in Tasmania they represent single-member districts, and in Victoria and Western Australia they represent a region formed by grouping electoral districts together.

There are five electorates for the Legislative Assembly, each with five members each, making up 25 members in total. There are currently 93 electoral districts in New South Wales.

There are 25 single-member electoral divisions in the Northern Territory, and 17 former divisions.

There are 15 electoral divisions in Tasmania for the upper house Legislative Council.

In the lower house the five federal divisions are used, but electing 5 members each

Electoral districts in the Melbourne area

There are 88 electoral districts in Victoria, for the Victorian Legislative Assembly. 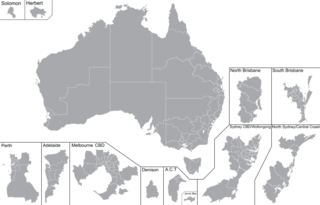 A member of the Legislative Assembly (MLA) is a representative elected by the voters of a constituency to a legislative assembly. Most often, the term refers to a subnational assembly such as that of a state, province, or territory of a country. Still, in a few instances, it refers to a national legislature.

Suffrage in Australia refers to the right to vote for people living in Australia, including all its six component states and territories, as well as local councils. The colonies of Australia began to grant universal male suffrage from 1856, with women's suffrage following between the 1890s and 1900s. Some jurisdictions introduced racial restrictions on voting from 1885. Such restrictions had been eradicated by the 1960s. Today, the right to vote at federal, state and local levels of government is enjoyed by citizens of Australia over the age of 18 years. 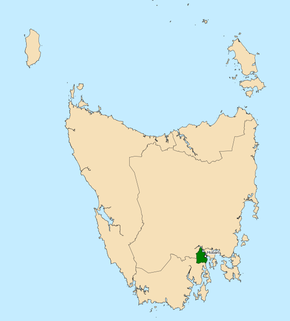 The electoral division of Clark is one of the five electorates in the Tasmanian House of Assembly, it is located in Hobart on the western shore of the River Derwent and includes the suburbs below Mount Wellington. Clark is named after Andrew Inglis Clark, a Tasmanian jurist who was the principal author of the Australian Constitution. The electorate shares its name and boundaries with the federal division of Clark.