Results from the 2021 census were released to the public on 28 June 2022 from the Australian Bureau of Statistics website. A small amount of additional 2021 census data will be released in October 2022 and in 2023. [4] Australia's next census is scheduled to take place in 2026.

In Australia, completing the census is compulsory for all people in Australia on census night, only excluding foreign diplomats and their families. [5] Census data is used to "help governments, businesses, not for profit and community organisations across the country make informed decisions", including helping governments to plan the provision of services. [2] An independent report from Lateral Economics found that for every $1 of investment on the census, $6 of benefits are created in the Australian economy. [6]

Since the 2001 Census, all households have the option of allowing their census data, including personal information such as names and addresses, to be stored by the National Archives of Australia (NAA) for 99 years. 99 years after Census Night, the NAA will release that data to the public in a Census Time Capsule. Censuses stored by the NAA cannot by accessed, amended, or retrieved by anyone, including courts and tribunal, until their release, the first of which will occur in 2100. [7]

The 2020 Census Test occurred on 27 October 2020 with around 100,000 households from Sydney, Adelaide, Darwin, and Canberra, as well as communities in Karratha, Warrnambool, and Alice Springs Town Camps. [8]

Every census, the ABS makes a recommendation to the Australian Government on the topics to be included, based on the benefit that data would provide to Australia. Through the Census and Statistics Amendment (Statistical Information) Regulations 2020, the federal parliament approves topics that may be included. For the 2021 census, the ABS had been authorised to include questions relating to long-term health conditions and service in the Australian Defence Force, and would not continue asking questions about home internet access considering the rise of mobile devices. This represented the first significant change to census topics since 2006. [9]

Alongside these two new topics, the 2021 Census continued to ask questions related to: [9]

Through late 2017, the ABS began discussions with major census data users on what was needed. From 3 April to 30 June 2018, a formal consultation process occurred on the online "ABS Consultation Hub", with the ABS receiving 450 submissions, 315 of which were published with consent. [10]

Since 2006, the ABS has allowed the census to be completed online, moving in 2016 to be digital-first. Like 2016, the 2021 Census was primarily collected online, with paper census forms being available on request for any household. In 2016, around a third of all households requested and completed their census using the paper form. It was planned that in late October 2019, the ABS would publish a market opportunity to seek a commercial partner to build the 2021 Census Digital Service. [11]

Anglo-Celtic Australians is an ancestral grouping of Australians whose ancestors originate wholly or partially in the British Isles - predominantly in England, Ireland, Scotland and Wales.

Australia legally has no official language. However, English is by far the most commonly spoken and has been entrenched as the de facto national language since European settlement. Australian English is a major variety of the English language with a distinctive pronunciation and lexicon, and differs slightly from other varieties of English in grammar and spelling. General Australian serves as the standard dialect. 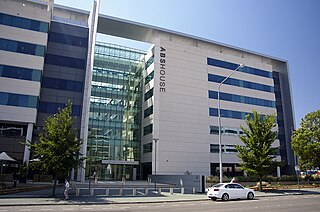 The Australian Bureau of Statistics (ABS) is the independent statutory agency of the Australian Government responsible for statistical collection and analysis and for giving evidence-based advice to federal, state and territory governments. The ABS collects and analyses statistics on economic, population, environmental and social issues, publishing many on their website. The ABS also operates the national Census of Population and Housing that occurs every five years. 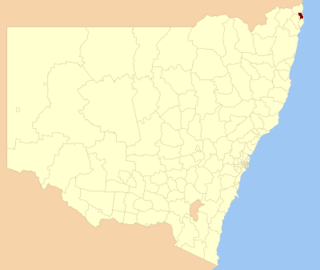 Byron Shire is a local government area located in the Northern Rivers region of New South Wales, Australia. The shire is located adjacent to the Coral Sea about 50 kilometres (31 mi) south of the Queensland border. The shire, administered from the town of Mullumbimby, covers an area of 566.7 square kilometres (218.8 sq mi), and has existed as a local government entity since 1906. The shire was named for Cape Byron, itself named by Captain Cook in May 1770 in honour of Vice-Admiral John Byron. 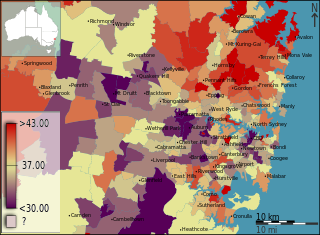 Sydney is Australia's most populous city, and is also the most populous city in Oceania. In the 2021 census, 5,231,147 persons declared themselves as residents of the Sydney Statistical Division–about one-fifth (20.58%) of Australia's total population. With a population density of 2037 people per square kilometre, the urban core has population density five times that of the greater region.

Serbian Australians, are citizens of Australia who fully, or partially identify as Serbian by birth or descent. In the 2021 census there were 94,997 people in Australia of Serbian ancestry, making it a significant group with the global Serb diaspora.

Australians, colloquially known as Aussies, are the citizens, nationals and individuals associated with the country of Australia. This connection may be residential, legal, historical or ethno-cultural. For most Australians, several of these connections exist and are collectively the source of their being Australian. Australian law does not provide for a racial or ethnic component of nationality, instead relying on citizenship as a legal status. 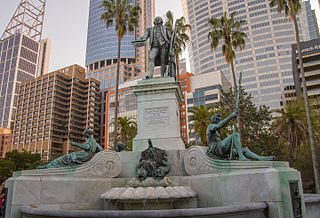 English Australians, also known as Anglo-Australians, are Australians whose ancestry originates wholly or partly in England. In the 2021 census, 8,385,928 people, or 33% of the Australian population, stated that they had English ancestry. It is the largest self-identified ancestry in Australia. People of ethnic English origin have been the largest group to migrate to Australia since the establishment of the Colony of New South Wales in 1788. 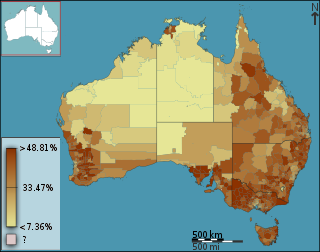 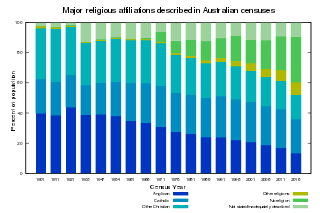 Atheism, agnosticism, scepticism, freethought, secular humanism or general irreligion are increasing in Australia. Post-war Australia has become a highly secularised country. Religion does not play a major role in the lives of much of the population.

Wright is a suburb currently under development in the Molonglo Valley district of Canberra, located within the Australian Capital Territory, Australia. It is named in honour of Judith Wright, a poet, environmentalist and Aboriginal land rights advocate. 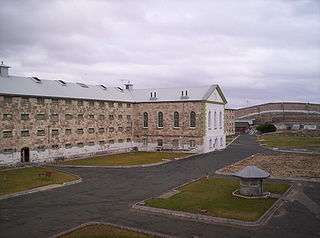 Punishment in Australia arises when an individual has been accused or convicted of breaking the law through the Australian criminal justice system. Australia uses prisons, as well as community corrections, When awaiting trial, prisoners may be kept in specialised remand centres or within other prisons. 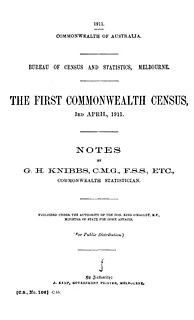 The 1911 Australian census was the first national population census held in Australia and was conducted by the Bureau of Census and Statistics. The day used for the census, was taken for the night between 2 and 3 April 1911. The total population of the Commonwealth of Australia was counted as 4,455,005 - an increase of 681,204 people, 18.05% over the 1901 "Federation" census.

The 2016 Australian census was the seventeenth national population census held in Australia. The census was officially conducted with effect on Tuesday, 9 August 2016. The total population of the Commonwealth of Australia was counted as 23,401,892 – an increase of 8.8 per cent or 1,894,175 people over the 2011 census. Norfolk Island joined the census for the first time in 2016, adding 1,748 to the population.