The Thurstone Word Fluency Test, also known as the Chicago Word Fluency Test (CWFT), [1] was developed by Louis Thurstone in 1938. [2] This test became the first word fluency psychometrically measured test available to patients with brain damage. [3] The test is a used to measure an individual's symbolic verbal fluency. [4] [5] [6] The test asks the subject to write as many words as possible beginning with the letter 'S' within a 5-minute limit, then as many words as possible beginning with letter 'C' within 4 minute limit. The total number of 'S' and 'C' words produced, minus the number of rule-breaking and perseverative responses, yield the patients' measure of verbal fluency.

The CWFT is used as one of the measures of brain's frontal lobe function. A related test, the COWAT (Controlled oral word association test), is part of the Halstead-Reitan Neuropsychological Battery.

Source amnesia is the inability to remember where, when or how previously learned information has been acquired, while retaining the factual knowledge. This branch of amnesia is associated with the malfunctioning of one's explicit memory. It is likely that the disconnect between having the knowledge and remembering the context in which the knowledge was acquired is due to a dissociation between semantic and episodic memory – an individual retains the semantic knowledge, but lacks the episodic knowledge to indicate the context in which the knowledge was gained.

Anomic aphasia is a mild, fluent type of aphasia where individuals have word retrieval failures and cannot express the words they want to say. Anomia is a deficit of expressive language. Anomia is a symptom of all forms of aphasia, but patients whose primary deficit is word retrieval are diagnosed with anomic aphasia. Some level of anomia is seen in all of the aphasias. Individuals with aphasia who display anomia can often describe an object in detail and maybe even use hand gestures to demonstrate how the object is used, but cannot find the appropriate word to name the object. Patients with anomic aphasia have relatively preserved speech fluency, repetition, comprehension, and grammatical speech.

Cognitive neuropsychology is a branch of cognitive psychology that aims to understand how the structure and function of the brain relates to specific psychological processes. Cognitive psychology is the science that looks at how mental processes are responsible for our cognitive abilities to store and produce new memories, produce language, recognize people and objects, as well as our ability to reason and problem solve. Cognitive neuropsychology places a particular emphasis on studying the cognitive effects of brain injury or neurological illness with a view to inferring models of normal cognitive functioning. Evidence is based on case studies of individual brain damaged patients who show deficits in brain areas and from patients who exhibit double dissociations. Double dissociations involve two patients and two tasks. One patient is impaired at one task but normal on the other, while the other patient is normal on the first task and impaired on the other. For example, patient A would be poor at reading printed words while still being normal at understanding spoken words, while the patient B would be normal at understanding written words and be poor at understanding spoken words. Scientists can interpret this information to explain how there is a single cognitive module for word comprehension. From studies like these, researchers infer that different areas of the brain are highly specialised. Cognitive neuropsychology can be distinguished from cognitive neuroscience, which is also interested in brain damaged patients, but is particularly focused on uncovering the neural mechanisms underlying cognitive processes.

Alexander Romanovich Luria was a Soviet neuropsychologist, often credited as a father of modern neuropsychological assessment. He developed an extensive and original battery of neuropsychological tests during his clinical work with brain-injured victims of World War II, which are still used in various forms. He made an in-depth analysis of the functioning of various brain regions and integrative processes of the brain in general. Luria's magnum opus, Higher Cortical Functions in Man (1962), is a much-used psychological textbook which has been translated into many languages and which he supplemented with The Working Brain in 1973.

Semantic dementia (SD), also known as semantic variant primary progressive aphasia (svPPA), is a progressive neurodegenerative disorder characterized by loss of semantic memory in both the verbal and non-verbal domains. However, the most common presenting symptoms are in the verbal domain. Semantic dementia is a disorder of semantic memory that causes patients to lose the ability to match words or images to their meanings. However, it is fairly rare for patients with semantic dementia to develop category specific impairments, though there have been documented cases of it occurring. Typically, a more generalized semantic impairment results from dimmed semantic representations in the brain. 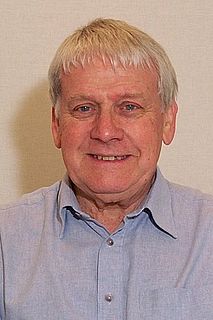 Alan David Baddeley, is a British psychologist. He is known for his research on memory and for developing the three-component model of working memory. He is a professor of psychology at the University of York. 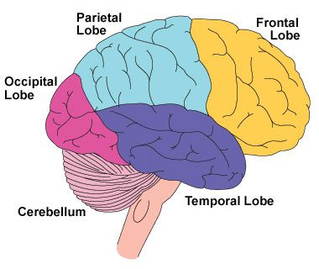 The Hayling and Brixton tests are neuropsychological tests of executive function created by psychologists Paul W. Burgess and Tim Shallice. It is composed of two tests, the Hayling Sentence Completion Test and the Brixton Spatial Awareness Test.

Muriel Elaine Deutsch Lezak was an American neuropsychologist best known for her book Neuropsychological Assessment, widely accepted as the standard in the field. Her work has centred on the research, assessment, and rehabilitation of brain injury. Lezak was a professor of neurology at the Oregon Health and Science University School of Medicine.

Verbal fluency tests are a kind of psychological test in which participants have to produce as many words as possible from a category in a given time. This category can be semantic, including objects such as animals or fruits, or phonemic, including words beginning with a specified letter, such as p, for example. The semantic fluency test is sometimes described as the category fluency test or simply as "freelisting", while letter fluency is also referred to as phonemic test fluency. The COWAT is the most employed phonemic variant. Although the most common performance measure is the total number of words, other analyses such as number of repetitions, number and length of clusters of words from the same semantic or phonemic subcategory, or number of switches to other categories can be carried out.

The California Verbal Learning Test (CVLT) is one of the most widely used neuropsychological tests in North America. As an instrument, it represents a relatively new approach to clinical psychology and the cognitive science of memory. It measures episodic verbal learning and memory, and demonstrates sensitivity to a range of clinical conditions. The test does this by attempting to link memory deficits with impaired performance on specific tasks. It assesses encoding, recall and recognition in a single modality of item presentation (auditory-verbal). The CVLT is considered to be a more sensitive measure of episodic memory than other verbal learning tests. It was designed to not only measure how much a subject learned, but also reveal strategies employed and the types of errors made. The CVLT indexes free and cued recall, serial position effects, semantic clustering, intrusions, interference and recognition. Delis et al. (1994) released the California Verbal Learning Test for Children (CVLT-C). The California Verbal Learning Test-II (CVLT-II) is an updated version of the original CVLT, which has been standardized and provides normative data.

The Cambridge Neuropsychological Test Automated Battery (CANTAB), originally developed at the University of Cambridge in the 1980s but now provided in a commercial capacity by Cambridge Cognition, is a computer-based cognitive assessment system consisting of a battery of neuropsychological tests, administered to subjects using a touch screen computer. The CANTAB tests were co-invented by Professor Trevor Robbins and Professor Barbara Sahakian. The 25 tests in CANTAB examine various areas of cognitive function, including:

The Trail Making Test is a neuropsychological test of visual attention and task switching. It consists of two parts in which the subject is instructed to connect a set of 25 dots as quickly as possible while still maintaining accuracy. The test can provide information about visual search speed, scanning, speed of processing, mental flexibility, as well as executive functioning. It is sensitive to detecting cognitive impairment associated with dementia, for example, Alzheimer's disease.

In psychology and neuroscience, executive dysfunction, or executive function deficit, is a disruption to the efficacy of the executive functions, which is a group of cognitive processes that regulate, control, and manage other cognitive processes. Executive dysfunction can refer to both neurocognitive deficits and behavioural symptoms. It is implicated in numerous psychopathologies and mental disorders, as well as short-term and long-term changes in non-clinical executive control.

The Delis–Kaplan Executive Function System (D-KEFS) is a neuropsychological test used to measure a variety of verbal and nonverbal executive functions for both children and adults. This assessment was developed over the span of a decade by Dean Delis, Edith Kaplan, and Joel Kramer, and it was published in 2001. The D-KEFS comprises nine tests that were designed to stand alone. Therefore, there are no aggregate measures or composite scores for an examinee's performance. A vast majority of these tests are modified, pre-existing measures ; however, some of these measures are new indices of executive functions.