Thyrocare Technologies Limited is a chain of diagnostic and preventive care laboratories, based in Navi Mumbai. [3] The company has 1,122 outlets and collection centers across India and parts of Nepal, Bangladesh and the Middle East. [3] [4]

Thyrocare was started in 1996, by A. Velumani, ex-scientist at Bhabha Atomic Research Centre (BARC), Mumbai, Maharashtra. The first laboratory was set up in Byculla, Mumbai, with an initial focus on thyroid testing considering a huge potential for thyroid testing in India. [4] [6] The laboratory was later shifted to a larger set-up, its main headquarters and central processing laboratory at Navi Mumbai. The company introduced a franchisee model for procuring samples to be sent for testing at their central laboratory in Mumbai. [6]

Thyrocare mainly deals with thyroid testing along with more than 200 tests and 50-odd profiles comprising different tests for preventive care and wellness under its brand, Aarogyam. [7]

In 2010, Thyrocare raised its first private equity funding with INR 188 crore from New Delhi-based CX Partners for a 30% stake. [8] It set up a subsidiary, Nuclear Healthcare Limited, which uses PET-CT to detect and locate cancerous cells. [7] [9] [10]

In April 2016, Thyrocare made its initial public offering (IPO). The Economic Times reported with "NSE showed the issue received cumulative bids for 55.08 crore shares, or 73.24 times the total issue size of 75.21 lakh shares on Friday." [14] Thyrocare is the second diagnostic firm in India to be listed so far. [9] 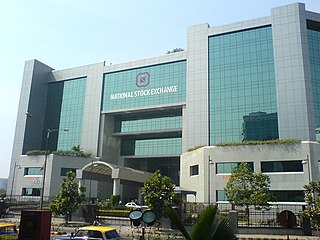 National Stock Exchange of India Limited (NSE) is the leading stock exchange of India, located in Mumbai, Maharashtra. NSE was established in 1992 as the first dematerialized electronic exchange in the country. NSE was the first exchange in the country to provide a modern, fully automated screen-based electronic trading system which offered easy trading facilities to investors spread across the length and breadth of the country. Vikram Limaye is Managing Director & Chief Executive Officer of NSE.

Reliance Capital Limited is an Indian diversified financial services holding company promoted by Reliance Anil Dhirubhai Ambani Group. Reliance Capital, a constituent of Nifty Midcap 50 and MSCI Global Small Cap Index, is a part of the Reliance Group. It is amongst India's leading and most valuable financial services companies in the private sector. As on March 31, 2017, the net worth of the company stood at Rs 16,548 crore, while its total assets as on the date stood at Rs 82,209 crore. In Fortune India 500 list of 2018, Reliance Capital was ranked as the 77th largest corporation in India with 5th rank in 'Non-Banking Finance' category.

GTL Limited, BSE: 500160 a Global Group Enterprise, is a Network Services company based in Navi Mumbai. Its India's largest network services provider to the world. Their deal with Reliance Communications fell through in the year 2010. 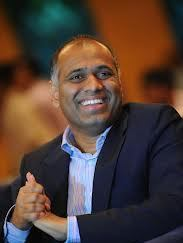 National Smart Cities Mission is an urban renewal and retrofitting program by the Government of India with the mission to develop smart cities across the country, making them citizen friendly and sustainable. The Union Ministry of Urban Development is responsible for implementing the mission in collaboration with the state governments of the respective cities. The mission initially included 100 cities, with the deadline for completion of the projects set between 2019 and 2023. 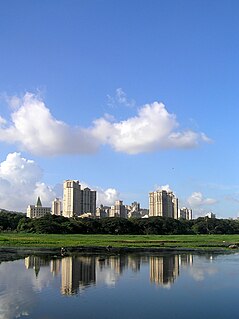 Hiranandani Gardens is an upmarket township consisting of condominiums, penthouses, bungalows and commercial complexes in Powai in the city of Mumbai. Hiranandani was constructed by the Hiranandani Group and can be accessed by JVLR from the North and LBS Marg from the South.

Dr. Lal PathLabs Limited is an international service provider of diagnostic and related healthcare tests. Based in Delhi, the company offers a broad range of tests on blood, urine and other human body viscera.

Arvind Lal is an Indian billionaire, pathologist, medical administrator and the chairman and managing director of Dr Lal PathLabs, a medical diagnostic centre in Delhi. A medical graduate and a medical academic, he is reported to have modernized Indian medical diagnostics and initiated the first Public Private Partnership (PPP) in the field of laboratory testing in India. He holds the rank of a Brigadier in the Indian Armed Forces, an honorary rank conferred by the Army. The Government of India awarded him the fourth highest civilian honour of the Padma Shri, in 2009, for his contributions to Medicine.

The Indian electronics industry saw growth in the early years of the 21st century, encouraged both by government policies and incentives and by international investment. Its key and most resource-intensive segment, the semiconductor industry benefitted from domestic demand growing briskly. Semiconductors were required by a large number of industries, including telecommunications, information technology, industrial machinery and automation, medical electronics, automobile, engineering, power and solar photovoltaic, defense and aerospace, consumer electronics, and appliances. As of 2015, however, the skill gap in Indian industry threatened progress, with 65 to 70 per cent of the market relying on imports.

Arokiaswamy Velumani is an Indian scientist and entrepreneur. He is the founder, chairman and managing director of Thyrocare Technologies Ltd. a chain of diagnostic and preventive care laboratories headquartered in Navi Mumbai. He is the founder and managing director of Nueclear Healthcare Limited, a radiology diagnostics company affiliated to Thyrocare.

Metropolis Labs is a chain of diagnostic companies, with its central laboratory in Mumbai, Maharashtra. Metropolis Healthcare has a chain of 124 clinical laboratories and 2400 collection centers across 7 countries including India. The healthcare company was founded in 1980, as a single laboratory with a revenue of about US$1.5 million and 4500 employees.

The Metropolitan Stock Exchange is one of India's nine stock exchanges recognised by the Securities and Exchange Board of India (SEBI).. The Exchange was notified of a "recognized stock exchange" under Section 2(39) of the Companies Act, 1956 by the Ministry of Corporate Affairs, Govt. of India, on December 21, 2012. The exchange’s shareholders are some of India’s top public sector banks, private sector banks, and domestic financial institutions.

AU Small Finance Bank Limited is an Indian scheduled commercial bank that was founded as vehicle finance company AU Financiers (India) Ltd in 1996 and converted to a small finance bank on 19 April 2017.

Palava is an integrated smart city developed by an Indian real estate developer, Lodha Group. The property is built on a 4500-acre land located between Thane, Navi Mumbai and Kalyan. Palava City is also referred to as the City of Opportunity. It was listed as India's No.1 smart city by Jones Lang LaSalle India's proprietary research report.

Rudrabhishek Enterprises Ltd (REPL) is an Indian public listed Real Estate and Infrastructure services company operating in India and Singapore. The company is led by MD and founder Pradeep Misra.

The Bhagwan Mahaveer Cancer Hospital and Research Centre (BMCHRC) is a not-for-profit super specialty cancer hospital managed by the in K G Kothari Memorial Trust in Jaipur, Rajasthan, India. It was established to provide comprehensive cancer care to the patients at an affordable cost, irrespective of economic consideration. The hospital was commissioned in 1996 by Shri Navrattan Kothari and became operational in 1997. BMCHRC is a National Accreditation Board for Hospitals & Healthcare Providers (NABH) accredited institution following international protocol for cancer treatment.