A Tibicena, also known as Guacanchas, was a mythological creature of the Guanches, pre-Hispanic inhabitants of the Canary Islands. Tibicenas were imagined to be demons or genies who had the bodies of great wild dogs with red eyes, covered by long, black fur. They lived in deep caves inside the mountains.

Some existing caves on the Canary Islands are still referred to as Tibicena lairs, such as "Cueva del Tibicena". According to myth, Tibicenas attacked livestock and persons, particularly at night. Guanche mythology posited Tibicenas as offspring of Guayota (the devil or malignant deity). Inhabitants of Tenerife called them Guacanchas and inhabitants of Gran Canaria called them Tibicenas.

Province of Santa Cruz de Tenerife, also Province of Santa Cruz, is a province of Spain, consisting of the western part of the autonomous community of the Canary Islands. It consists of about half of the Atlantic archipelago: the islands of Tenerife, La Gomera, El Hierro, and La Palma. It occupies an area of 3,381 km2 (1,305 sq mi). It also includes a series of adjacent roques. 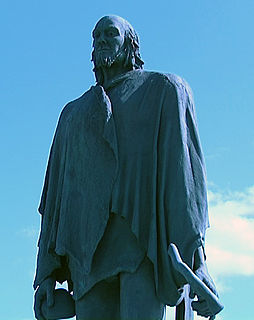 The Guanches were the aboriginal inhabitants of the Canary Islands. In 2017, the first genome-wide data from the Guanches confirmed a North African origin and that they were genetically most similar to ancient North African Berber peoples of the nearby North African mainland. It is believed that they arrived on the archipelago some time in the first millennium BCE. 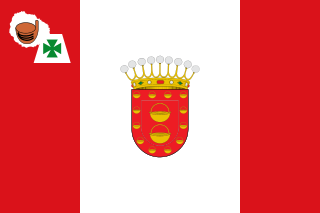 La Gomera is one of Spain's Canary Islands, located in the Atlantic Ocean off the coast of Africa. With an area of 370.03 square kilometres (142.87 sq mi), it is the third smallest of the eight main islands of this archipelago. It belongs to the province of Santa Cruz de Tenerife. La Gomera is the third least populous of the eight main Canary Islands with 21,503 inhabitants. Its capital is San Sebastián de La Gomera, where the cabildo insular is located.

San Andrés is a village located on the island of Tenerife in the Canary Islands (Spain). It is located on the coast, at the foot of the Anaga mountains, 7 km (4.3 mi) northeast of the capital city Santa Cruz de Tenerife. It is administratively part of the municipality of Santa Cruz de Tenerife. San Andrés is one of the oldest villages of the Canary Islands, and was founded around 1497. 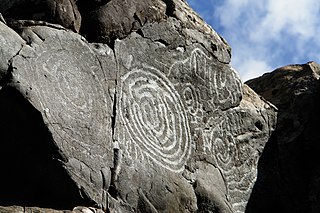 The Canary Islands have been known since antiquity. Until the Spanish colonization between 1402 and 1496, the Canaries were populated by an indigenous population, whose origin is still the subject of discussion among historians and linguists. 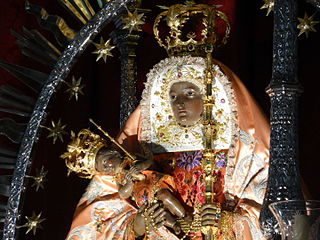 Museo de la Naturaleza y Arqueología (MUNA), is a museum-based in Santa Cruz de Tenerife, Tenerife,. It contains many significant archaeological finds and is considered the best repository of objects from the Pre-Castilian Canary Islands. The museum also houses significant paleontological, botanical, entomological, and marine and terrestrial vertebrate collections, and is considered the best Natural Library of the Canary Islands.

The Mummy of San Andrés is a human mummy belonging to the Guanche culture, who were the ancient inhabitants of the Canary Islands, Spain.

Guayota, in Guanche mythology of the Tenerife, was the principal malignant deity and Achamán's adversary.

Guanche mummies are the intentionally desiccated remains of members of the indigenous Berber Guanche people of the Tenerife. The Guanche mummies were made during the eras prior to Spanish settlement of the area in the 15th century. The methods of embalming are similar to those that were used by the Ancient Egyptians, though fewer mummies remain from the Guanche due to looting and desecration. 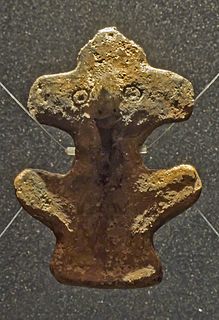 Guatimac or the Idol of Guatimac is an owl-shaped Guanche idol, found in 1885, hidden in a cave between the municipalities of Fasnia and Güímar wrapped in goat hide.

The Barranco de Badajoz or Chamoco is a ravine on the island of Tenerife, in the province of Santa Cruz de Tenerife, part of the municipality of Güímar in the southeast of the island.

Cave-Shrine of Chinguaro is a Roman Catholic church and cave located in Güímar on Tenerife. It was the traditional palace of the Guanche King of the Menceyato de Güímar, Acaimo. 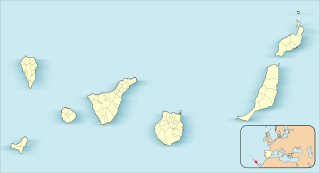 The Caves of Don Gaspar is an important archaeological site located in the north of the island of Tenerife.

Antón Guanche was a Guanche aborigine of the island of Tenerife protagonist of the events around the presence among the Guanches of the Christian image of the Virgin of Candelaria before the European conquest of the island.