Tick Bite is an unincorporated community on the Contentnea Creek near Grifton in Lenoir County, North Carolina, United States. The only business in the community was a quarry.

Tick Bite was decimated by Hurricane Floyd in 1999. Contentnea Creek, which runs parallel to much of the town, before emptying into the Neuse River, surged to levels that had not been seen (as estimated by county and state officials) in 500 years. The flooding set a new "500 year flood plain" for the area. Eagle Swamp, a tributary of Contentnea Creek, joins here.

Tick Bite has a rich history as part of the homelands of the Tuscarora Indians and the location of Cowards Bridge, a major bridge on the road from Kinston to New Bern. During the Civil War, troops were located at the bridge with earthen breastworks to protect the bridge from attack.

Cleveland County is a county in the central part of the U.S. state of Oklahoma. The population was 295,528 at the 2020 census, making it the third-most populous county in Oklahoma. Its county seat is Norman. The county was named after U.S. President Grover Cleveland. 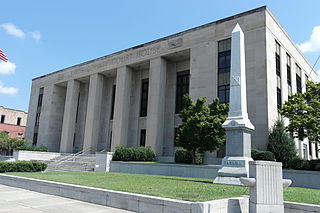 Lenoir County is a county in the U.S. state of North Carolina. As of the 2010 Census, its population was 59,495. Its county seat is Kinston, located on the Neuse River, across which the county has its territory.

Greene County is a county located in the U.S. state of North Carolina. As of the 2010 Census, the population was 21,362. Its county seat is Snow Hill.

Hookerton is a town in Greene County, North Carolina, United States. The population was 409 at the 2010 census. It is geographically located southeast of Snow Hill on North Carolina Highway 123. The town is part of the Greenville Metropolitan Area.

Snow Hill is a town in Greene County, North Carolina, United States. The population was 1,595 at the 2010 census. It is the county seat of Greene County and is part of the Greenville Metropolitan Area. Snow Hill hosts numerous tennis tournaments during the year. Snow Hill is home to the Green Ridge Racquet Club. Many junior players and adults travel to Snow Hill in order to play in the USTA Sanctioned tournaments.

Farmville is a town in Pitt County, North Carolina, United States, eight miles to the west of Greenville. At the 2010 Census, the population was 4,654. Farmville is a part of the Greenville Metropolitan Area located in North Carolina's Inner Banks region. Farmville has been a Tree City USA community through the Arbor Day Foundation for 36 years, proving its commitment to managing and expanding its public trees. The Town government, in cooperation with other non-profit groups that work for the advancement of the town, sponsor annual events such as the Farmville Dogwood Festival, the Christmas Parade, Hometown Halloween, A Taste of Farmville, and the Holiday Open House, among others.

Sissonville is a census-designated place (CDP) in Kanawha County, West Virginia, United States, along the Pocatalico River. The population was 4,028 at the 2010 census. Sissonville is located within 14 miles of Charleston, the state capital. 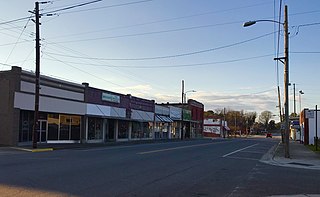 Grifton is a town in Pitt and Lenoir counties, North Carolina, United States. The population was 2,617 at the 2010 census. The Pitt County portion of the town is a part of the Greenville Metropolitan Area located in North Carolina's Inner Banks region.

Jason is a small unincorporated community in eastern North Carolina, United States, in Greene County. Incorporated in 1885, Jason is an agricultural based community with town water system and volunteer fire service. Jason is located roughly halfway between Snow Hill and LaGrange on Highway 903. First named Aloc, meaning "leave alone" by the Tuscarora Indian tribe, Jason was settled by the Hardy, Mewborn, Aldridge and Kearney families. Once a prospering town with a furniture store, post office, and general store, one could buy groceries, post a letter, purchase alcohol, and be placed in jail, all in the same building. There was also a cotton mill on the northern side of town, which was one of the first in Greene County.

The Greenwood gold mine operated in Prince William County, Virginia, United States, near the town of Independent Hill for a few years before closing in 1885. It was one of two known gold mines in Prince William County, the other being the Crawford placer prospect on Neabsco Creek, near I-95, though small amounts of gold were occasionally found at the Cabin Branch Pyrite Mine in nearby Dumfries.

Crooked Creek is a 26.3-mile-long (42.3 km) tributary of the Tioga River located entirely in Tioga County, Pennsylvania in the United States. 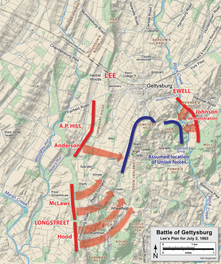 Rock Creek is an 18.9-mile-long (30.4 km) tributary of the Monocacy River in south-central Pennsylvania and serves as the border between Cumberland and Mount Joy townships. Rock Creek was used by the Underground Railroad and flows near several Gettysburg Battlefield sites, including Culp's Hill, the Benner Hill artillery location, and Barlow Knoll. 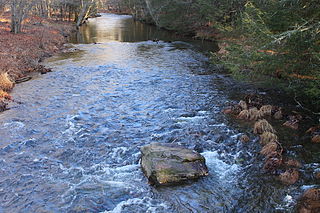 Huntington Creek is a tributary of Fishing Creek in Luzerne and Columbia counties, Pennsylvania, in the United States. It is approximately 29.5 miles (47.5 km) long. 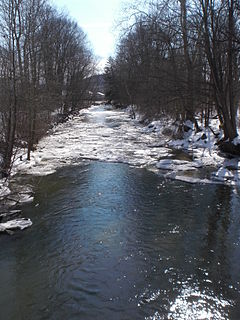 Little Fishing Creek is a tributary of Fishing Creek in Sullivan County, Lycoming County, and Columbia County, in Pennsylvania, in the United States. It is approximately 23.5 miles (37.8 km) long and flows through eight townships. The watershed of the creek has an area of 68.1 square miles (176 km2). The creek has six named tributaries, of which the largest are Spruce Run and West Branch Run.

Vermont is an unincorporated community in Howard Township, Howard County, Indiana, United States platted in January 1848. The founders also then already had a store set up in Vermont. In the late 19th century it was a German campground. Vermont was in the flooding zone when the Wildcat Creek Reservoir was constructed in 1957, and it never recovered from that. Vermont was once the home of the "Vermont Covered Bridge" which now sits in Highland Park in Kokomo, Indiana. It is part of the Kokomo Metropolitan Statistical Area.

Westport is an unincorporated community in Clinton County, Pennsylvania, United States. It lies above the Susquehanna River, along Pennsylvania Route 120.

Otter Creek Junction is an unincorporated community in Otter Creek Township, Vigo County, in the U.S. state of Indiana.

Willow Creek Dam is a dam in Lewis and Clark County, Montana.

Blowing Rock is an unincorporated community in Dickenson County, Virginia, in the United States.