Tierga is a municipality located in the province of Zaragoza, Aragon, Spain. According to the 2004 census (INE), the municipality has a population of 221 inhabitants.

Murcia is a city in south-eastern Spain, the capital and most populous city of the Autonomous Community of the Region of Murcia, and the seventh largest city in the country, with a population of 447,182 inhabitants in 2018. The population of the metropolitan area was 689,591 in 2010. It is located on the Segura River, in the southeast of the Iberian Peninsula; it has a climate with hot summers, mild winters, and relatively low precipitation. 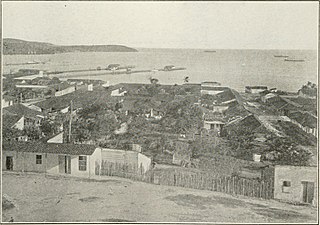 Nuevitas is a municipality and port town in the Camagüey Province of Cuba. The large bay was sighted by Christopher Columbus in 1492.

The metropolitan zones of Mexico have been traditionally defined as the group of municipalities that heavily interact with each other, usually around a core city. The phenomenon of metropolization in Mexico is relatively recent, starting in the 1940's, and due to the accelerated level of urbanization in the country, the definition of a metropolitan zone is reviewed periodically by the Mexican population and census authorities.