Tiertex Design Studios Limited was a British video game developer based in Macclesfield, England; it was founded in 1986, focusing on porting games to home computers and handheld platforms.

The Simpsons: Bart vs. the Space Mutants is a platform video game, the first based on the animated television series The Simpsons. It was released in 1991 for the Nintendo Entertainment System, Amiga, Amstrad CPC, Atari ST, Commodore 64, and ZX Spectrum and in 1992 for Sega Genesis, Sega Master System and Sega Game Gear. It was published by Acclaim Entertainment and Ocean Software, and developed by Imagineering and Arc Developments. In the game, the player controls Bart Simpson through five levels as he tries to ruin the aliens' plan to take over the world. Video game critics have given Bart vs. the Space Mutants mixed reviews, with criticism directed at the difficulty of the game, partly caused by restricted controls.

Allister Mark Brimble is a British video game music composer. Brimble began composing music and sound effects for the video game industry in the mid-1980s. He also produced various audio tracks, as "Brimble's Beats", that were distributed on cover disks of magazines including CU Amiga and Amiga Format.

Indiana Jones and the Last Crusade is the title of four different video games released for various video and computer home systems between 1989 and 1994. The format of each particular video game is different, but they loosely follow the storyline of the 1989 film.

The Addams Family is a platform game based on the 1991 movie of the same name released by Ocean Software in 1993. The game was released for the Sega Master System, Sega Genesis, Super Nintendo Entertainment System, Amiga and Atari ST. 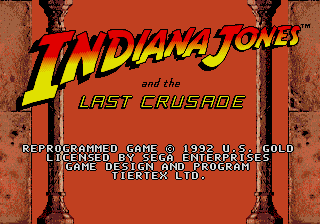 Indiana Jones and the Last Crusade: The Action Game was published in 1989 by Lucasfilm Games, based on the film of the same name. The game was released for the ZX Spectrum, Amstrad CPC, Commodore 64, Atari ST, Amiga, IBM PC, MSX, Master System, NES, Game Boy, Sega Genesis and Game Gear. 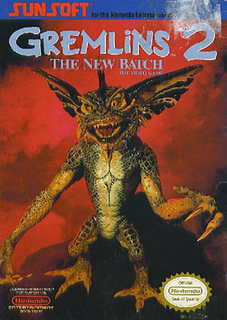 Gremlins 2: The New Batch is a Platform video game developed and published by Sunsoft for the Nintendo Entertainment System and Game Boy video game systems in 1990. The game was released in conjunction with the film from Warner Bros. and Amblin Entertainment.

Krisalis Software Limited was a video game developer and publisher founded by Tony Kavanagh, Peter Harrap, and Shaun Hollingworth in 1987 under the name Teque Software Development Limited as a subsidiary label until the official company name was changed to Krisalis Software in 1991. Originally, the name was intended to be Chrysalis Software Ltd., but a dispute with record company Chrysalis Records resulted in a minor spelling change. The company was restructured in April 2001 with a new management team of Tony Kavanagh, Tim James and Simeon Pashley and reused the original name of Teque Software development.

Alberto José González Pedraza is a Spanish video game graphic artist, music composer, designer, producer, and co-founder of Bit Managers and Abylight, who has worked on a variety of titles, most notably games released by French video game publisher Infogrames. He has composed music for or worked on over 60 games, ranging from music composition to graphic programming, and eventually became one of the lead designers at the Spanish developer AbyLight. Despite having composed dozens of full soundtracks for video games, González has never had any formal music training.

Vivid Image was a video game developer from the United Kingdom, founded in 1988 by Mevlut Dinc, Hugh Riley and John Twiddy, all former employees of System 3. Their debut game was Hammerfist for the Amiga, Amstrad CPC, Atari ST, Commodore 64 and ZX Spectrum, released in 1990. Hammerfist is also notable for being one of the few games that was developed for the failed and never released Konix Multisystem game console. Vivid Image also created the development system for the Commodore 64GS, another failed game console, and helped publishers with putting their games on the C64GS cartridges.