Tigiria is a tehsil (block) of Cuttack district. There are 10 (panchayats) with a total of 50 villages under the Tigiria administrative division. [1] 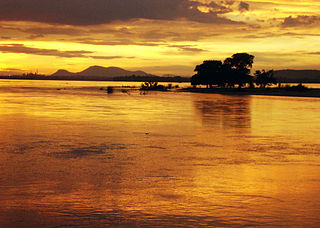 Cuttack district is one of the 30 districts of Odisha state in East India. Its administrative headquarters are located in the city of Cuttack. As of 2011 Census, after Ganjam, it is the second most populous district of Odisha, with a population of 2,624,470.

Athagad is a town"(N.A.C)" and a sub-division of Cuttack district in the state of Odisha, India.

During the British Raj era, Tigiria was the capital of Tigiria State. It was one of several princely states of the Eastern States Agency and the most densely populated one. [4]

The British Raj was the rule by the British Crown in the Indian subcontinent from 1858 to 1947. The rule is also called Crown rule in India, or direct rule in India. The region under British control was commonly called British India or simply India in contemporaneous usage, and included areas directly administered by the United Kingdom, which were collectively called British India, and those ruled by indigenous rulers, but under British tutelage or paramountcy, and called the princely states. The whole was also informally called the Indian Empire. As India, it was a founding member of the League of Nations, a participating nation in the Summer Olympics in 1900, 1920, 1928, 1932, and 1936, and a founding member of the United Nations in San Francisco in 1945.

Tigiria State, also known as Tigiria Nizigarh, was one of the princely states of India during the period of the British Raj. It was located in present-day Tigiria block of Cuttack district, Odisha. Although it was the smallest of the states of the Orissa States Agency it was the most densely populated. The last ruler of Tigiria joined the state to the Indian Union in 1948.

Nayagarh district is one of the 30 districts of Odisha State in eastern India. It was created in 1992 when the erstwhile Puri District was split into three distinct districts, namely Khurdha, Nayagarh and Puri. It is home to the Baisipali Wildlife Sanctuary. It is like a Hill station, so far as natural scenery is concerned. Chhena Poda is the favourite sweet for which Nayagarh is famous in Odisha. Mr. Hemanta Kumar Padhi, IAS is now heading the district administration as the District Magistrate & Collector.

Bilaspur may refer to:

Khandapada is a town and a notified area committee in Nayagarh district in the Indian state of Odisha. It's a beautiful town on the vally of nine mountains.

Rampur may refer to several places:

Sonepur or Sonapur may refer to:

Cuttack Lok Sabha Constituency is one of the 21 Lok Sabha (Parliamentary) Constituencies in Odisha state in Eastern India.

Raj-Ranpur is a small town in the district of Nayagarh in the eastern Indian state of Odisha. The town is also known as Ranpurgarh or simply Ranpur as per the modern usage. The town is historically significant especially during the British Raj when it was the capital of the princely state of Ranpur. The martyrs Shaheed Raghu-Dibakar who were hanged for their resistance to British rule belong to this place.

Kuspangi is a small village in Banki-Dompara block under Banki tehsil and Cuttack district, in the state of Odisha, India. It is a main census village.

Narasinghpur is a block area under the subdivision of Athagad, district Cuttack, Odisha.

Lanjigarh is a Vidhan Sabha constituency of Kalahandi district, Odisha.

Athagarh is a Vidhan Sabha constituency of Cuttack district, Odisha.

Baramba is a tehsil (block) of Cuttack district. There are 36 village (panchayats) under the Baramba administrative division.

The Eastern States Union was a short-lived (1947–48) union of princely states in newly-independent India that gathered most of the princely states of the former Orissa Tributary States and Chhattisgarh States Agency in order to fill the vacuum of power created after the departure of the British and the wrapping up of the British Raj.

Dudurkote is a small town in subdivision of Hindol, Dhenkanal District of Orissa state. It is located 18 kilometres (11 mi) from NH 42 to Gudiakateni and old NH 42 is passed in the center of the Dudurkote. It is surrounded by reserve forest from the East, South and West. It was a part of the Hindol princely State before independence. It is 60 kilometres (37 mi) from Dhenkanal.