Last updated September 17, 2020
This article is about the district. For its eponymous headquarters, see Cuttack.
District of Odisha in India

Cuttack district is one of the 30 districts of Odisha state in India. Its administrative headquarters are located in the city of Cuttack. As of 2011 Census, after Ganjam, it is the second most populous district of Odisha (out of 30), with a population of 2,624,470. [1] The name is an anglicised form of Kataka or Katak which literally means The Fort a reference to the ancient Barabati Fort.

There are religious establishments often built within close proximity of each other in Cuttack.

Cuttack celebrates festivals from all religions with much fanfare and devotion.

Cuttack is widely known as the commercial capital of Odisha. It is believed to have the largest GDP among all cities in Odisha due to its large business houses and wide range of industries ranging from ferrous alloys, steel and logistics to agriculture and traditional industries like textiles and handicrafts. There are many trading houses in the city renowned nationally and internationally. The Port of Paradip around 85 km from the city facilitates the process.

There are 11 large-scale industries in and around Cuttack mostly in Choudwar and Athagarh and many more in the pipeline. These industries include steel, power, automobile, alloys, fireclay, etc. Indian Metals & Ferro Alloys, the country's largest producer of ferrous alloys is in Choudwar, Cuttack. A mega-auto complex is in implementation stages on the city's outskirts.

The legacy of Cuttack in traditional industries in enviable. The city is second largest hub for textiles in eastern India after Raipur. The city's annual textile trade generates over a billion dollars. A large textile park is planned by giving a facelift to the erstwhile Orissa Textile Mills on city outskirts. Cuttack is famous for its glory of craftsmanship of handicraft work in silver filigree. These fine and unique handicraft works add significantly to the local economy.

Logistics and other industries

Cuttack occupies a very significant place in the logistics map of the country. It connects the upper mineral-advanced districts and states to the Kolkata-Chennai corridor at the meeting point of NH-42 and NH-5 at Manguli Square.

The proximity to Paradip Port comes as an added advantage. OSL Group, one of the leading stevedore firms of the country is headquartered in Cuttack. Cuttack, being the largest business hub of the state is the nodal point of trade and transport. It also has the largest wholesale commodities market of the state at Malgodown and Chatrabazaar catering to the whole state.

Agriculture is a mainstay of Cuttack's economy. The nearby villages are known for their high-quality and surplus production of crops, vegetables and fruits. These are usually sold at the largest mandi of the state at Chatrabazaar inside the city. The presence of Central Rice Research Institute (CRRI), the largest rice research institute in Asia, adds to the importance of Cuttack in the agricultural map of the country.

Being the former capital of the state and a big business hub, many central and state government and corporate offices are in Cuttack. The service sector is quite large. The people of nearby districts are heavily depended on the city for their livelihood, contributing to the service sector and, thus, the floating population. The presence of Odisha High Court and the SCB Medical & College, the largest medical institution in the state, further nourishes the service sector. The Oriya film industry, Ollywood, is based in Cuttack and adds to its economy. Education is a major industry due to large number of universities, colleges, schools and coaching centres and caters to the neighboring districts.

Languages of Cuttack district in 2011 census

Besides these places there are also many interesting places.

Cuttack is the former capital and the second largest city in the Indian state of Odisha. It is the headquarters of the Cuttack district. The name of the city is an anglicised form of Kataka which literally means The Fort, a reference to the ancient Barabati Fort around which the city initially developed. Cuttack is known as the Millennium City as well as the Silver City due to its history of 1000 years and famous silver filigree works. It is considered as the judicial capital of Odisha as the Orissa High Court is located here. It is the commercial capital of Odisha which hosts many trading and business houses in and around the city. Cuttack is famous for its Durga puja which is the most important festival of Odisha. Cuttack is also the birthplace of Netaji Subhas Chandra Bose. The city is categorised as a Tier-II city as per the ranking system used by Government of India.

Choudwar is a city and a municipality in Cuttack district of India in administered state Odisha. It comes under Bhubaneswar-Cuttack Comminsiorate.

Banki is a town and a Subdivision, Legislative Council constituency no. 88 and Notified Area Council in Cuttack district in the state of Odisha, India. Banki is famous for the Charchika Temple, dedicated to the deity of Chamunda, the eight armed goddess and incarnation of Durga. Current MLA Devi Ranjan Tripathy

Brajrajnagar is a town and a municipality in Jharsuguda district in the state of Odisha, India. Popular legend says the town was named after Braj Mohan Birla after he setup Orient Paper Mills in 1936. It's a small sleepy town on rocky terrain, built on the banks of IB river, with temples mostly built by the Birlas. Later it became famous for MCL-owned coal mines after Orient Paper Mills of Birlas closed down in 1999.

Nuapatna is a census town in Cuttack district in the Indian state of Odisha.

Salepur is a town in the district of Cuttack, and the headquarters of the Salipur block. It is situated near the bank of river Chitrotpala, 25 km from the city of Cuttack and 55 km from the state capital Bhubaneswar.

The Maa Sarala Temple is a Hindu temple in the district of Jagatsinghpur, Odisha, India. It is one of the eight most famous Shakta shrines of Odisha.

Barabati Fort is a 13th-century fort built by the Ganga dynasty in Cuttack, Odisha. The ruins of the fort remain with its moat, gate, and the earthen mound of the nine-storied palace, which evokes the memories of past days. Today it sits next to the modern Barabati Stadium, the venue of various sport events and cultural programs. There is also a temple dedicated to Katak Chandi, the presiding deity of the city, not far away from the fort. Now there are plans to develop the old Gadakhai into a world class tourist destination with boating facilities and a world class park. The renovation work of the Gadakhai is going on in full swing.

Bālijātrā literally means A Voyage to Bali. It is the Asia's largest open trade fair. This festival is held in Odisha, in the city of Cuttack at Gadagadia Ghata of the Mahanadi river, to mark the day when ancient Sadhabas would set sail to distant lands of Bali, as well as Java, Sumatra, Borneo, and Sri Lanka for trade and cultural expansion. To commemorate this, the festival is celebrated every year from the day of Kartika Purnima according to the Odia Calendar. 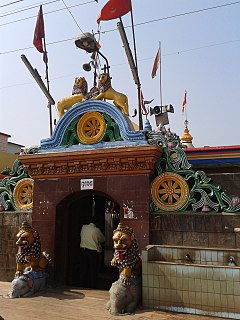 The Katak Chandi Temple is an ancient temple dedicated to the Goddess Chandi, the presiding deity of Cuttack, Odisha. The temple is located nearby the banks of the Mahanadi River. It is famous for the annual Durga Puja and Kali Puja festivals. The Durga Puja festivities are prominent in Maa Katak Chandi temple which takes place for 16 days starting from dark fortnight of Ashwina Krishna Ashtami till Ashwina shukla navami and Vijayadashami. The goddess popularly called as Maa Katak Chandi, sits and rules on the heart of the ancient city. She has four hands holding Paasha (noose), Ankusha (goad), gestures dispelling fear (Abhaya), and granting boon (Varada). She is worshiped as Bhuvaneshvari Mahavidya by Sevayatas belonging to Utkala Brahmins every day. Maa Chandi is worshipped in various incarnations of Durga during the puja. In Cuttack, people strongly believe Maa Katak Chandi as 'The Living Goddess'.

Mahanadi Vihar is a residential area in Cuttack, Orissa, India. It is situated in a tongue of land formed by the Mahanadi River and National Highway 5. The area is named after the river and comes under the control of the CDA. Schools, a college, hospitals, temples, parks, playgrounds, markets and banks can be found there and Dussera and Puja take place there. 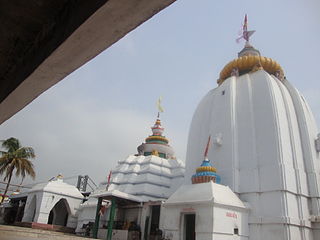 Dhabaleswar Temple is dedicated to the worship of Lord Shiva. It is situated at a distance of 27 km from the city of Cuttack, in the exotic island of Lord Dhabaleshwar. It is one of the famous weekend tours from Cuttack. The temple, located in an island on River Mahanadi, is embellished with stone carvings that date back to the early 10th and 11th century. The serene ambiance, in which the temple is situated, inspires spiritual feeling among one and all.

Budheisuni is a village and gram panchayat and a notified area committee in Ganjam district in the Indian state of Odisha. People of the village mainly depend upon cultivation, business, and very few people are working in government services and rest all are working in the textile industry at Surat and Ahmedabad. The village is surrounded with hills, river and ponds. The neighbouring villages includes Chanchania Palli, Gothali Sodaka.

Sisua is a medium-sized village in the Salepur taluk/mandal/tehsil/block of Cuttack district in the state of Odisha, India, close to the new Sisua Village Jagannath Temple. The village lies South of Cuttack to Kendraparda road left of Sisua village road if traveling South. As of 2009 Kantapara is the gram panchayat of Sisua village

Oranda is a village located in the Gurudijhatia Block of the Athagad Tehsil of the Cuttack District of the Indian state of Odisha.