Tomato ringspot virus (ToRSV) is a plant pathogenic virus of the family Secoviridae . It affects species of cucumber, tobacco, tomato, cowpea, among others. [1] It causes ringspots in tobacco plants and raspberries, yellow bud mosaic in peaches, yellow vein in grapes, and stunted growth in gladiolus and Narcissus . Its range is in the temperate regions of North America, especially where its vector, Xiphinema americanum is present. [2] Along with the adult and larval stages of this nematode, the virus is also spread by seed. This type of infection is more common in strawberries and soybeans than any other susceptible plant. [3] [4] 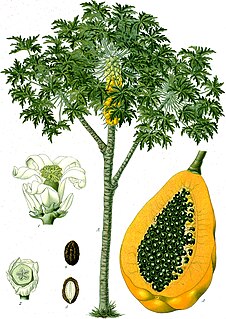 The papaya, papaw, or pawpaw is the plant Carica papaya, one of the 22 accepted species in the genus Carica of the family Caricaceae. Its origin is in the tropics of the Americas, perhaps from Central America and southern Mexico.

A satellite is a subviral agent that depends on the coinfection of a host cell with a helper virus for its replication. Satellites can be divided into two major classes: satellite viruses and satellite nucleic acids. Satellite viruses, which are most commonly associated with plants, but are also found in mammals, arthropods, and bacteria, encode structural proteins to enclose their genetic material, which are therefore distinct from the structural proteins of their helper viruses. Satellite nucleic acids, in contrast, do not encode their own structural proteins, but instead are encapsulated by proteins encoded by their helper viruses. The genomes of satellites range upward from 359 nucleotides in length for satellite tobacco ringspot virus RNA (STobRV).

Bromoviridae is a family of viruses. Plants serve as natural hosts. There are currently 36 species in this family, divided among 6 genera.

Comovirinae is a subfamily of viruses in the order Picornavirales, in the family Secoviridae; its genera were formerly classified in the family Comoviridae. Plants serve as natural hosts. There are currently 62 species in this subfamily, divided among 3 genera. 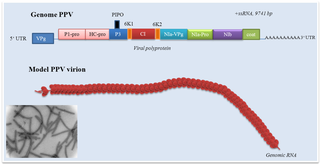 Potyvirus is a genus of viruses in the family Potyviridae. Plants serve as natural hosts. There are currently 183 species in this genus including the type species Potato virus Y. The genus is named after the type virus. Potyviruses account for ~30% of the currently known plant viruses. Like begomoviruses, members of this genus may cause significant losses in agricultural, pastoral, horticultural and ornamental crops. More than 200 species of aphids spread potyviruses and most are from the subfamily Aphidinae.

Xiphinema is a genus of ectoparasitic root nematodes commonly known as dagger nematodes. The genus is of economic importance on grape, strawberry, hops and a few other crops. Major species include X.americanum, X.diversicaudatum, X.index, X.italiae and X.pachtaicum. They can be easily recognized by their long bodies and stylets which are long enough to reach the vascular tissue of plants. Different members of the genus have been shown to induce moderate to large amounts of root damage through root penetration, which in some species results in the formation of galls. They are of agricultural concern because they are vectors of nepoviruses, transferring them during feeding. Efforts to study these nematodes in more detail have proved problematic in some species due to difficulties in maintaining populations in a greenhouse environment.

Papaya ringspot virus (PRSV) is a pathogenic plant virus in the genus Potyvirus and the virus family Potyviridae which primarily infects the papaya tree.

Xiphinema americanum is a species of plant pathogenic nematodes. It is one of many species that belongs to the genus Xiphinema. It was first described by N. A. Cobb in 1913, who found it on both sides of the United States on the roots of grass, corn, and citrus trees. Not only is Xiphinema americanum known to vector plant viruses, but also X. americanum has been referred to as "the most destructive plant parasitic nematode in America", and one of the four major nematode pests in the Southeastern United States.

Xiphinema diversicaudatum is an amphimitic ectoparasitic nematode species. This species has a characteristically long stylet capable of penetrating into a host’s vascular tissue. They have a wide host range with some of the extensively studied ones being strawberry, hops and raspberry, due to their economic importance. The direct root damage caused through penetration near the root tip and formation of galls is a secondary concern when compared with the damage caused by vectoring the arabis mosaic virus. The virus attaches to the interior cuticle lining and can be transferred from infected to uninfected root tissue as the nematode feeds and sheds. Management of this particular nematode relies on nematicides such as 1,3-Dichloropropene (Telone) at 40 gpa.or methyl bromide at 1000 lb/ac to control to 28 in deep.

Arabis mosaic virus is a viral plant pathogen that is known to infect multiple hosts. The pathogen, commonly referred to as ArMV, is from the family Secoviridae, and it causes yellow dwarf of raspberry and is one of the causes of mosaic of rhubarb. Arabis mosaic virus infects multiple hosts, including strawberries, hops, hemp, grape, geraniums, raspberries, sugar beets, celery, horseradish, lilac, peach, and lettuces.

Grapevine fanleaf virus (GFLV) is a plant pathogenic virus of the family Secoviridae. It infects grapevines, causing chlorosis of the leaves and lowering the fruit quality. Because of its effect on grape yield, GFLV is a pathogen of commercial importance. It is transmitted via a nematode vector, Xiphinema index. This nematode acquires the virus through feeding on roots of an infected plant, and passes it on in the same manner.

Strawberry latent ringspot virus (SLRSV) is a plant pathogenic virus in an Unassigned family. Its entry in the ICTV database indicates this virus is a Sadwavirus but current literature indicates that it may be a Cheravirus.

Raspberry ringspot virus (RRSV) is a plant pathogenic virus of the family Secoviridae. It was first described by Cadman in 1958. It causes ringspots in raspberries and strawberries and can cause rasp-leaf symptoms in cherry. It also has been found in many other plants including those in the Vitis and Narcissus genera. There are many strains of the virus, the most important including the Scottish strain, the English strain, and the Lloyd George yellow blotch strain. The Scottish strain is the type virus.

Ilarvirus is a genus of positive-strand RNA viruses in the family Bromoviridae. Plants serve as natural hosts. There are currently 22 species in this genus including the type species Tobacco streak virus.

Secoviridae is a family of viruses in the order Picornavirales. Plants serve as natural hosts. There are currently 86 species in this family, divided among 8 genera or not assigned to a genus. The family was created in 2009 with the grouping of families Sequiviridae, now dissolved, and Comoviridae, now subfamily Comovirinae, along with the then unassigned genera Cheravirus, Sadwavirus, and Torradovirus.