Tombaatar is a mammal genus that existed during the Mongolian Upper Cretaceous period. It co-existed with some of the late dinosaurs. This animal was a member of the extinct order Multituberculata, within the suborder Cimolodonta and family Djadochtatheriidae. The genus Tombaatar was named by Rougier G.W., Novacek M. and Dashzeveg D. in 1997.

The species Tombaatar sabuli is known from remains found in the Upper Cretaceous Djadokhta Formation of Ukhaa Tolgod, Mongolia. Tombaatar was a relatively large multituberculate. The skull is about 6 cm in length.

Multituberculata is an extinct taxon of rodent-like allotherian mammals that existed for approximately 166 million years, the longest fossil history of any mammal lineage. They eventually declined from the late Paleocene onwards, disappearing from the known fossil record in the late Eocene, though gondwanatheres lived into the Miocene, and may have been multituberculates. More than 200 species are known, ranging from mouse-sized to beaver-sized. These species occupied a diversity of ecological niches, ranging from burrow-dwelling to squirrel-like arborealism to jerboa-like hoppers. Multituberculates are usually placed as crown mammals outside either of the two main groups of living mammals—Theria, including placentals and marsupials, and Monotremata—but closer to Theria than to monotremes. Nonetheless, at least one study found a potential status as sister taxa to monotremes/Australosphenida.

Plagiaulacida is a group of extinct multituberculate mammals. Multituberculates were among the most common mammals of the Mesozoic, "the age of the dinosaurs". Plagiaulacids, an informal suborder, are the most basal of this order, and ranged from the Middle Jurassic Period to the Lower Cretaceous Period of the northern hemisphere.

Eobaatar is a genus of extinct mammal from the Lower Cretaceous of Mongolia, Spain and England. A member of the also extinct order Multituberculata, it lies within the suborder Plagiaulacida and family Eobaataridae. The genus Eobaatar was named by Kielan-Jaworowska Z., Dashzeveg D. and Trofimov B.A. in 1987. Its name was made from Greek "eos" = "dawn" and Mongolian "baatar" = "hero"", "warrior".

Monobaatar is a genus of extinct mammal from the Lower Cretaceous of Mongolia. It was within the also extinct order Multituberculata, and lived during the "age of the dinosaurs". It is also within the suborder "Plagiaulacida" and has been tentatively referred to the family Eobaataridae, though it probably is not a member. 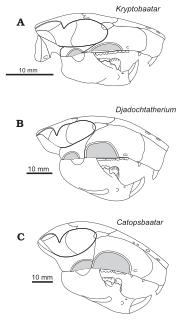 Djadochtatherioidea is a group of extinct mammals known from the upper Cretaceous of Central Asia. They were members of an also extinct order called Multituberculata. These were generally somewhat rodent-like creatures, who scurried around during the "age of the dinosaurs", though nonetheless very ecologically diverse; several were jerboa-like hoppers, while others like Mangasbaatar were large sized and fossorial. Unusually for multituberculates, some of this group are represented by very good remains. All upper Cretaceous Mongolian multituberculates are included with one exception, the genus Buginbaatar.

Bulganbaatar is a Central Asian mammal genus from the Upper Cretaceous. It existed in the company of dinosaurs. This animal was a member of the extinct order Multituberculata. It's within the suborder Cimolodonta and is a member of the superfamily Djadochtatherioidea. The genus Bulganbaatar was named by Kielan-Jaworowska Z. in 1974.

Djadochtatheriidae is a family of fossil mammals within the extinct order Multituberculata. Remains are known from the Upper Cretaceous of Central Asia. These animals lived during the Mesozoic, also known as the "age of the dinosaurs". This family is part of the suborder of Cimolodonta. The taxon Djadochtatheriidae was named by Z. Kielan-Jaworowska and J. H. Hurum in 1997.

Catopsbaatar is a genus of multituberculate, an extinct order of rodent-like mammals. It lived in what is now Mongolia during the late Campanian age of the Late Cretaceous epoch, about 72 million years ago. The first fossils were collected in the early 1970s, and the animal was named as a new species of the genus Djadochtatherium in 1974, D. catopsaloides. The specific name refers to the animal's similarity to the genus Catopsalis. The species was moved to the genus Catopsalis in 1979, and received its own genus in 1994. Five skulls, one molar, and one skeleton with a skull are known; the last is the genus' most complete specimen. Catopsbaatar was a member of the family Djadochtatheriidae.

Kryptobaatar and also known as Gobiaatar, Gobibaatar or Tugrigbaatar is an extinct mammalian genus dating from the Upper Cretaceous Period and identified in Central Asia. This animal was a member of the extinct order of Multituberculata within the suborder Cimolodonta, and was a member of the family Djadochtatheriidae. It lived contemporaneously with some of the dinosaurs. Its skull had a length of perhaps 3 cm.

Ferugliotheriidae is one of three known families in the order Gondwanatheria, an enigmatic group of extinct mammals. Gondwanatheres have been classified as a group of uncertain affinities or as members of Multituberculata, a major extinct mammalian order. The best-known representative of Ferugliotheriidae is the genus Ferugliotherium from the Late Cretaceous epoch in Argentina. A second genus, Trapalcotherium, is known from a single tooth, a first lower molariform, from a different Late Cretaceous Argentinean locality. Another genus known from a single tooth, Argentodites, was first described as an unrelated multituberculate, but later identified as possibly related to Ferugliotherium. Finally, a single tooth from the Paleogene of Peru, LACM 149371, perhaps a last upper molariform, and a recent specimen from Mexico, may represent related animals.

Pucadelphys is an extinct genus of non-marsupial metatherian species. The genus contains a single species, P. andinus. Fossils of Pucadelphys have been found in the Santa Lucía Formation in Tiupampa in Bolivia.

Byronosaurus is a genus of troodontid dinosaur from the Late Cretaceous Period of Mongolia.

Citipati is a genus of oviraptorid dinosaur that lived in Asia during the Late Cretaceous period, about 75 million to 71 million years ago. It is mainly known from the Ukhaa Tolgod locality at the Djadokhta Formation, where the first remains were collected during the 1990s. The genus and type species Citipati osmolskae were named and described in 2001. A second species from the adyacent Zamyn Khondt locality may also exist. Citipati is one of the best-known oviraptorids thanks to a number of well-preserved specimens, including individuals found in brooding positions atop nests of eggs, though most of them were initially referred to the related Oviraptor. These nesting specimens have helped to solidify the link between non-avian dinosaurs and birds.

Estesia is an extinct genus of Late Cretaceous helodermatoid lizard found in the Gobi Desert in Mongolia. It was discovered in June 1990 by a joint expedition made up of Mongolian and American palaeontologists, and described in 1992 by Mark Norell, Malcolm McKenna and Michael Novacek. This animal is of interest to palaeontologists, not only because it is close to the lineage of modern Gila monsters (Heloderma), but also because its dentition shows evidence that it was venomous. 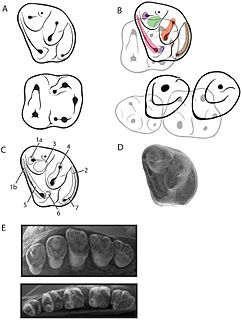 Gomphos is an extinct genus of early lagomorph from the early Eocene of the China and Mongolia.

Deltatheroida is an extinct group of basal metatherians that were distantly related to modern marsupials. The majority of known members of the group lived in the Cretaceous; one species, Gurbanodelta kara, is known from the late Paleocene (Gashatan) of China. Their fossils are restricted to Central Asia and North America. This order can be defined as all metatherians closer to Deltatheridium than to Marsupialia.

Ukhaatherium is a now extinct species of mammal that lived during the upper Cretaceous about 84 to 72 million years ago in today's East Asia. It is known above all from Ukhaa Tolgod, where it alone is occupied by eight individuals, six of them completely. In general, Ukhaatherium weighing about 32 g was quite small and resembled today's insect eaters. In addition, there were still some original skeletal features. 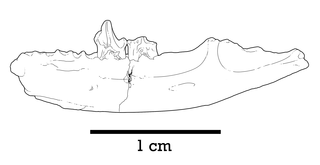 Tsagandelta is a genus of deltatheroidean therian mammal that lived in Asia during the Late Cretaceous. Distantly related to modern marsupials, it is part of Deltatheroida, a lineage of carnivorous metatherians common in the Cretaceous of Asia and among the most successful non-theropod carnivores of the region. It represents the first known mammal from the Bayan Shireh Formation.

Zhelestidae is a lineage of extinct eutherian mammals. Occurring in the Late Cretaceous from the Turonian to the Maastrichtian, they were an extremely successful group, with representatives present in Europe, Asia, India, Africa and North America, ostensibly rendering them a cosmopolitan clade. They were specialised towards an herbivorous lifestyle and were in fact initially considered stem-ungulates, but the presence of epipubics and "archaic" dental characters render them as non-placental eutherians.