Tomchrasky is a village in Glen Moriston, in Inverness-shire, Scottish Highlands and is in the Scottish council area of Highland. [1] The village lies on the north banks of the River Moriston. The village of Dalchreichart lies 2 miles (3 kilometres) to the east of Tomchrasky.

The River Ness is a river about 6 miles long, which flows from the northern end of Loch Ness in Scotland, through Loch Dochfour, north-east to Inverness, with a total fall in height of about 16 metres before discharging into the Beauly Firth. The river is the origin of the name of Inverness which is from the Scottish Gaelic: Inbhir Nis, meaning "Mouth of the Ness".

Crianlarich is a village in Stirling council area and in the registration county of Perthshire, Scotland, around 6 miles (10 km) north-east of the head of Loch Lomond. The village bills itself as "the gateway to the Highlands".

Invermoriston is a small village 11 kilometres north of Fort Augustus, Highland, Scotland. The village is on the A82 road, at a junction with the A887.

Loch Cluanie is a loch in the Northwest Highlands of Scotland at the south-east end of Glen Shiel. It is a reservoir, contained behind the Cluanie Dam, constructed by Mitchell Construction and completed in 1957 as part of the North of Scotland Hydro-Electric Board's Glenmoriston project to generate hydroelectricity. Water feeds the dam from the west via two flows, from a tunnel from the dammed Loch Loyne and via the River Moriston.

Trees for Life is a registered charity working to restore the Caledonian Forest and its unique wildlife to the Scottish Highlands.

Achlain is a house in Glenmoriston in the Highland council area of Scotland. It is about 15 km west of Invermoriston, next to the A887 road and the River Moriston.

St Fillans is a village in the central highlands of Scotland, in the council area of Perth and Kinross. The village lies at the eastern end of Loch Earn, 6 km west of Comrie on the A85 road, at the point where the River Earn leaves the loch. St Fillans was a small clachan in the 18th century, known as Port of Lochearn, or Meikleport. In 1817 it was renamed St Fillans by Lord Gwydyr, the husband of Clementina Drummond, heiress to the Drummond Estate.

Aonach Meadhoin is a Munro mountain situated in the Kintail region of Scotland. It stands on the northern side of Glen Shiel some 31 kilometres south east of Kyle of Lochalsh.

Glenmoriston or Glen Moriston is a river glen in the Scottish Highlands, that runs from Loch Ness, at the village of Invermoriston, westwards to Loch Cluanie, where it meets with Glen Shiel. The A887 and A87 roads pass through Glenmoriston. 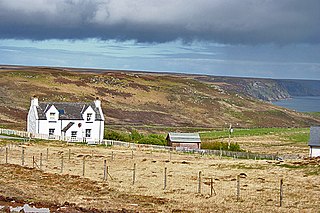 New Tolsta is a village on the Isle of Lewis in the Outer Hebrides, Scotland. New Tolsta is within the parish of Stornoway, and it lies to the north of North Tolsta, at the end of the B895 road.

Telford bridge usually refers to a bridge whose design and construction was overseen by the late-18th/early-19th century Scottish civil engineer Thomas Telford. An (incomplete) list of these may be found here. Among those Telford bridges known by the name Telford Bridge are:

Dalchreichart is a small hamlet in Glen Moriston, Inverness-shire, in the Highland council area of Scotland. It lies about 15 km west of Invermoriston.

Roag, meaning noisy place or 'deer bay' in Norse, is a small remote scattered hamlet on the north west shore of Pool Roag, and is in the west of the Duirinish peninsula, on the Isle of Skye, Scottish Highlands and is in the Scottish council area of Highland. 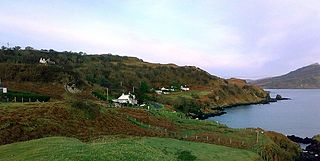 Gedintailor is a crofting village, lying on the shores of the Narrows of Raasay on the east coast of the island of Skye in Scotland and is in the council area of Highland. 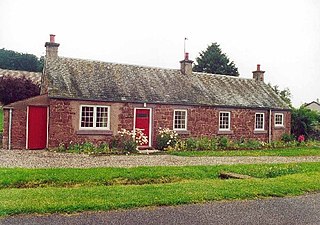 Rait is a small village in Perth and Kinross, Scotland. It lies 2 1⁄2 miles (4.0 km) north-west of Errol, in the Gowrie area west of Dundee, on a minor road crossing the Sidlaw Hills through the Glen of Rait. The village is mainly residential with stone cottages, some modern developments and also features some single storey thatched cottages dating back to the 1700s or early 1800s which form a fermtoun. The former parish church, now ruined, was built in the Middle Ages, and abandoned in the 17th century when the parish of Rait was merged with Kilspindie. The remains of a prehistoric promontory fort lie to the east of the village. The 16th-century Fingask Castle is located to the north of the village, on the south-facing slopes of the Sidlaw Hills.

A network of military roads, sometimes called General Wade's Military Roads, was constructed in the Scottish Highlands during the middle part of the 18th century as part of an attempt by the British Government to bring order to a part of the country which had risen up in the Jacobite rebellion of 1715. 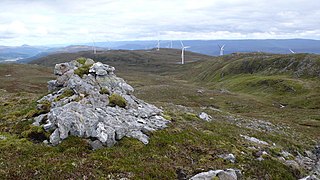 Meall Dubh is a mountain in the Northwest Highlands, Scotland. Lying near the village of Fort Augustus, it is the highest peak between the valleys of Glen Moriston and Glen Garry. 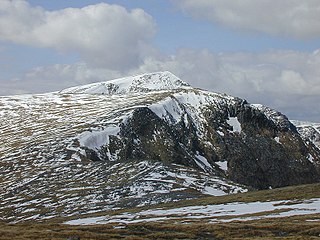 Sgurr nan Conbhairean is a mountain in the Northwest Highlands, Scotland, lying north of Loch Cluanie between Glen Shiel and Glen Moriston.

Aonach Shasuinn is a mountain in the Northwest Highlands of Scotland. It lies in Inverness-shire, on the southern side of Glen Affric. 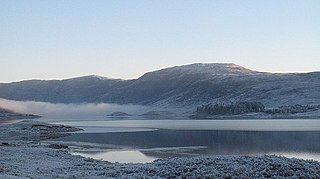 Beinn Loinne is a mountain in the Northwest Highlands of Scotland. It rises above the southern shore of Loch Cluanie in Inverness-shire.