He was undefeated in Moto X Step Up for three years in a row before FMX rider Matt Buyten defeated him at X Games IX (2003). Tommy Clowers has 8 X Games medals overall (6 in XG, 2 in WXG)

The X Games is an annual extreme sports event hosted, produced, and broadcast by ESPN. Coverage is also shown on ESPN's sister network, ABC. The inaugural X Games were held during the summer of 1995 in Providence and Newport, Rhode Island. Participants compete to win bronze, silver, and gold medals, as well as prize money. 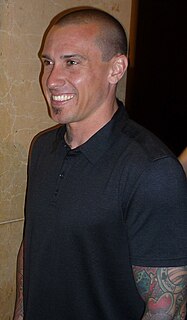 Carey Jason Phillip Hart is an American former professional freestyle motocross competitor, motorcycle racer and current off-road truck racer. He is known for being the first motorcyclist to perform a back flip on a 250cc motorcycle during a competition, and for his company Hart & Huntington Tattoo & Clothing Company.

Caleb Alan Wyatt is the first person to ever perform a successful backflip on a large motorcycle. On April 25, 2002 at the Rogue Valley Motocross track (RVMX), Caleb. A photo of Caleb was taken by the RVMX track owner to document the event. 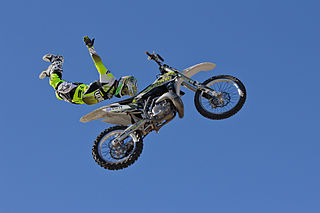 Freestyle motocross is a variation on the sport of motocross in which motorcycle riders attempt to impress judges with jumps and stunts.

Kenny Bartram is an American professional freestyle motocross rider. Bartram is from Stillwater, Oklahoma, hence his nickname "The Cowboy". Before his career in FMX, he won many Oklahoma State Series MX Races. Out of all other riders, he currently has the most wins, 57 in all. Bartam has also suffered plenty of injuries, including 22 broken bones, 7 knocked out teeth, a steel plate in the jaw, and a damaged blood vessel in the brain. 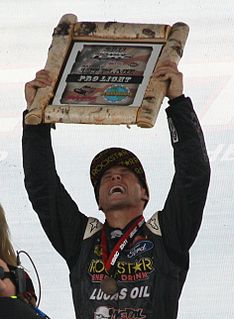 Red Bull X-Fighters was a freestyle motocross motorbike stunt competition organized by Red Bull from 2001 to 2017. It was the most popular freestyle motocross event in the world, with a 15-year plus history and more than 50 past events on six continents. The riders are invited to compete head-to-head through a series of knockout rounds in bullrings and famous locations and sites.

X Games XIII (13) took place from August 2–5, 2007 in Los Angeles, California at the Staples Center and the Home Depot Center. It was broadcast on the ESPN networks, EXPN.com, and ABC.

Kyle Loza is an FMX rider, residing in Rancho Santa Margarita, California. He is the founder and member of the group Riders 4 Christ and is a tattoo artist.

X Games XV was the fifteenth annual X Games extreme sports event. It took place from July 30 - August 2, 2009, in Los Angeles, California, at the Staples Center and the Home Depot Center. It was broadcast on ESPN networks, ABC, and EXPN.com. 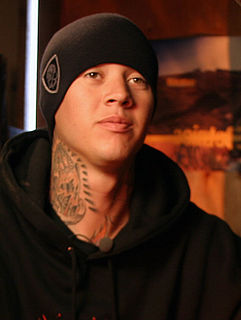 Jeremy "Twitch" Stenberg is a professional freestyle motocross rider and professional off-road truck racer. Stenberg received his nickname 'Twitch' from his Tourette's syndrome, which he was diagnosed with at the age of eight. He started riding dirtbikes at the age of two so his father could spend more time with him and keep him out of their dangerous neighbourhood. He is a born again Christian. He also starred in the reality show “The X Life”

Michael Jones, is an American freestyle motocross competitor, with over 35 years of professional rider experience. He started his motorcycle racing career in 1972 aged 6.. Continuing to race up until his last Fastcross in Italy 2000, he became increasingly involved in the emerging sport of Freestyle Motocross, performing half-time jump shows at football games as early as 1987. He is attributed as being "one of the founding fathers of the sport of freestyle motocross", and became known as "Mad" Mike Jones after an Italian promoter described his stunts as "Mad" and "the name stuck". He has appeared in numerous movies including Crusty Demons and Eight Legged Freaks, and also goes around North American schools to share about his experience.

Jeremy Daniel Lusk was an American freestyle motocross racer from San Diego, California. He was part of the riding group Metal Mulisha.

Takayuki "Taka" Higashino is a Japanese freestyle motocross rider who has competed in international events including the X Games.

X Games XVI was an action sporting event which took place from July 29 – August 1, 2010 in Los Angeles, California at the Staples Center, L.A. Live and the Los Angeles Memorial Coliseum. The games featured the sports of Motocross, skateboarding, BMX, and rallying.

Mat Rebeaud is a Swiss freestyle motocross rider. He was born and raised in Payerne, Switzerland. Mat was raised amongst a motocross family; his grandfather and father raced motocross back in 1965, and Mat started racing at a very young age. in 2002, at the age of 20, Mat decided to chase his childhood dreams and start racing motocross professionally. Through a love of jumping Mat started practicing freestyle tricks and racing started taking a backseat to ramps and dirt hits. Freestyle soon became Mat's life, in 2005 he won the night of the jumps championship, It was the start of Mat's FMX career. Then in 2006 he won the FIM freestyle international motocross world championship. 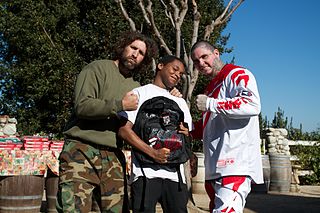 Larry "Link" Linkogle is a professional freestyle motocross rider and the co-founder and owner of Metal Mulisha, LLC. Linkogle holds the world record for long-distance motorcycle jumps and has appeared in feature films as a stuntman. He is regarded as a founder of freestyle motocross.

Jeff "Ox" Kargola was an American professional Freestyle Motocross (FMX) rider. He was a member of the Metal mulisha FMX team.