Toni-Seelos-Olympiaschanze is a ski jumping hill in Seefeld outside of Innsbruck, Austria. It is a part of the Seefeld Nordic Competence Centre consists of two hills, a normal hill with a hill size of HS109 (K-99) and medium hill with at HS75 (K-68). Next to the jumps is a cross-country skiing stadium. It opened in 1931 as Jahnschanze, but was renamed in honor of Anton Seelos in 1948. [1]

The venue was used for the normal hill competitions during the 1964 and 1976 Winter Olympics, and for the FIS Nordic World Ski Championships in 1985 and 2019. It is also regularly used for FIS Nordic Combined World Cup. 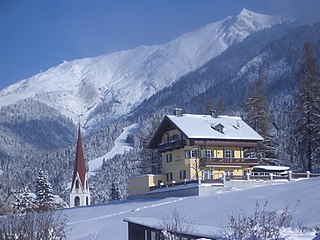 Per Bergerud is a Norwegian former ski jumper.

Anton Seelos was an Austrian alpine skier and world champion.

The 2009/10 FIS Nordic Combined World Cup was the 27th world cup season, a combination of ski jumping and cross-country skiing organized by FIS. It started in Kuusamo, Finland on 28 November 2009 and ended on 14 March 2010 in Oslo, Norway.

Srednja Bloudkova was a ski jumping K90 hill located in Planica, Slovenia, that existed between 1949 and 2012.

Ski jumping at the 2012 Winter Youth Olympics was held at the Toni-Seelos-Olympiaschanze in Seefeld, Austria on 14 January. For the first time ever women competed in ski jumping at an Olympic event

Hill size (HS) is a measurement for the size of a ski jumping hill. It is calculated based on the technical data of a hill based on radius, angle of inclination and record distance. Since mid-2004, hill size became the official measurement for the size of hills, replacing construction points, which however remain the basis for issuing points. The distance is measured as a straight line from the takeoff to the knoll, and then follows the landing surface until reaching the hill size point. The world's largest hills are Vikersundbakken in Vikersund, Norway and Letalnica Bratov Gorišek in Planica, Slovenia with hill size of 240 meters. The hills normally mark the hill size physically with a horizontal line across the hill. 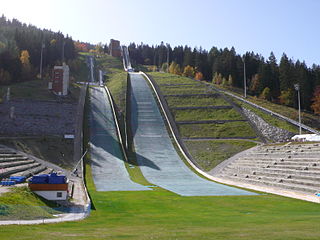 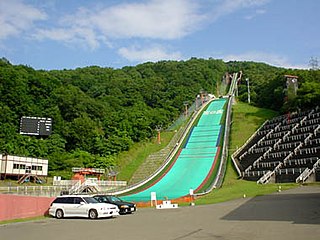 The Miyanomori Ski Jump Stadium, also known as the Miyanomori-Schanze is a ski jumping venue located in the Miyanomori area in Chūō-ku, Sapporo, Hokkaidō, Japan. The stadium has hosted a number of winter sports events including 1972 Winter Olympics and FIS Nordic World Ski Championships 2007. 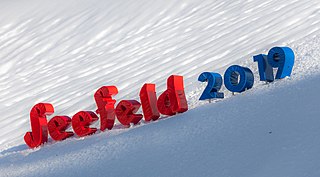 The 2014/15 FIS Nordic Combined World Cup was the 32nd world cup season, a combination of ski jumping and cross-country skiing organized by FIS. It started on 29 November 2014 in Ruka, Finland and ended on 14 March 2015 in Oslo, Norway.

The "Giuseppe Dal Ben" Ski Jump Arena is a ski jumping venue in Predazzo, Val di Fiemme, Trentino, in northern Italy. It is a venue in the FIS Ski jumping World Cup.

The Seefeld Nordic Competence Centre is a multi-sport venue for nordic skiing located in Seefeld in Tirol, Austria. It consists of a cross-country skiing stadium, the Toni-Seelos-Olympiaschanzes with two ski jumping hills; a normal hill and a medium hill and a shooting range for biathlon. It has previously hosted the 1976 Winter Olympics and the FIS Nordic World Ski Championships in 1985 and 2019.