Tonkinoscaris excisicollis is a species of beetle in the family Carabidae, the only species in the genus Tonkinoscaris. [1]

Ground beetles are a large, cosmopolitan family of beetles, Carabidae, with more than 40,000 species worldwide, around 2,000 of which are found in North America and 2,700 in Europe. It is one of the ten most speciose animal families, as of 2015.

Rhysodidae is a family of beetles, consisting of more than 350 species in about 20 genera.

Amara is a large genus of carabid beetles, commonly called the sun beetles. Many are holarctic, but a few species are neotropical or occur in eastern Asia.

The Adephaga, with more than 40,000 recorded species in 10 families, are a suborder of highly specialized beetles and the second-largest suborder of the order Coleoptera. Members of this suborder are adephagans, a term which notably include ground beetles, tiger beetles, predacious diving beetles, and whirligig beetles. The majority of the species belongs to the family of carabids, or ground beetles (Carabidae).

Calathus is a genus of ground beetle native to the Palearctic, the Near East and North Africa. There are at least 190 described species in Calathus.

Herbert Edward Andrewes was an English entomologist who specialised in beetles of the order Coleoptera.

Calosoma is a genus of large ground beetles that occur primarily throughout the Northern Hemisphere, and are referred to as caterpillar hunters or searchers. Many of the 167 species are largely or entirely black, but some have bright metallic coloration. They produce a foul-smelling spray from glands near the tip of the abdomen. They are recognizable due to their large thorax, which is almost the size of their abdomen and much wider than their head.

Bembidion is the largest genus of beetles in the family Carabidae by number of species. All species are small and move very fast. Most of them live close to water. The genus has a biantitropical distribution, meaning they are found in both the Northern and Southern Hemispheres, but not in the tropics. In warmer regions it is substituted by closely related Tachys and other genera.

Agra schwarzeneggeri is a species of carabid beetle named after the actor Arnold Schwarzenegger. The holotype was collected in Costa Rica and first described to science in 2002.

Nebria is a genus of ground beetles native to the Palearctic, the Near East and North Africa. 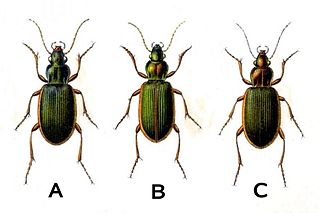 Chlaenius is a large and diverse genus of ground beetle. It is native to the Palearctic, the Near East, North Africa, Afrotropical region, and the Nearctic. Worldwide, roughly 1,000 species are currently recognized with the majority of known species occurring in the Oriental and Afrotropical regions. The genus is divided into many subgenera.

Platynus is a genus of ground beetles in the family Carabidae. There are at least 190 described species in Platynus.

Omoglymmius is a genus of wrinkled bark beetles in the family Carabidae, found on every continent except Africa and Antarctica. There are at least 150 species in Omoglymmius.

Elaphropus is a genus of ground beetles in the family Carabidae. There are at least 370 described species in Elaphropus.

Roger Naviaux is a French entomologist known for his work on beetles.