Anthony Wayne Beasley (born December 5, 1966) is an American professional baseball coach who is the third-base coach of the Texas Rangers of Major League Baseball. [1] Beasley has held that position since 2015; he previously served as a third-base coach and minor-league manager in the Pittsburgh Pirates and the Washington Nationals organizations.

Primarily a middle infielder, Beasley spent nine seasons as a player in the minor leagues and batted .260 with 22 homers and 242 RBI in 854 games. He was originally selected by the Baltimore Orioles in the 19th round of the 1989 June draft before being acquired by Pittsburgh in a deal for infielder Tommy Shields in September 1991. In his minor league career, Beasley was named to the Carolina League All-Star team in both 1990 and 1991. He also garnered Southern League All-Star laurels in 1996. [2]

Beasley began his managerial career with the Williamsport Crosscutters in 2001 and led the club to a 46-26 regular season record and a first-place finish; the club was declared co-champions of the New York–Penn League along with Brooklyn. He was named Low Class-A Manager of-the-Year by Baseball America in consecutive seasons with the Hickory Crawdads in 2002-03 and to the South Atlantic League's mid-season All-Star squad in 2003. Beasley guided the Crawdads to the SAL championship and the fifth-best record in the minors in 2002 and was also selected to the leagues post-season All-Star Team.

Beasley has spent four seasons as a coach at the Major League level. In 2006, he worked as the third-base coach for the Nationals under manager Frank Robinson. He then returned to the Pittsburgh Pirates' organization, where he had spent nearly all of his career to that point, spending the 2007 season as the Pirates' Minor League Infield Coordinator, a role in which he was instrumental in prospect Neil Walker's transition from catcher to third base during spring training. The following year Beasley returned to major-league coaching as the third-base coach on manager John Russell's staff, and he continued in that role until the end of the 2010 season. In total, Beasley spent 18 years with the Pittsburgh organization.

Beasley spent five seasons as a manager in the Pirates' farm system, guiding his club to the post-season in all five years and a combined record of 372-258 (.590 winning pct.) during the regular season. He was tabbed by Baseball America as the Double-A Manager-of-the-Year in 2004 after guiding Altoona to the Eastern League championship series (his team lost to New Hampshire). Beasley also served the United States National Team as a coach at the MLB Futures Game in Houston during All-Star week in 2004.

In 2011, Beasley returned to the Nationals as manager of the Double-A Harrisburg Senators; then, in 2012–2013, he skippered Washington's top affiliate, the Syracuse Chiefs of the Triple-A International League. The following year, in 2014, Beasley was the co-field-coordinator of instruction in the Washington Nationals' minor-league system. [3]

In addition to his regular season managerial duties, Beasley also managed the Mesa Desert Dogs during the Arizona Fall League in 2004, guiding the club to an 18-13 record and a first-place finish in the National Division (his club lost out to the Mesa Solar Sox in the Championship Series). After serving as a player/coach for the AA Carolina Mudcats and the Class A Lynchburg Hillcats in 1998, Beasley began his full-time coaching career as the Hitting Coach with the GCL Pirates in 1999. He worked in the same capacity with Lynchburg in 2000.

On February 19, 2016, Beasley was diagnosed with rectal cancer, forcing him to miss the start of the 2016 season. He was declared cancer-free in December 2016.

As third base coach

On Wednesday, July 30, 2008 before the game against the Colorado Rockies, Tony Beasley performed the national anthem at the Pirates' home stadium, PNC Park. [4]

Carlos Jesús García Guerrero is a former Major League Baseball second baseman and right-handed batter who played for the Pittsburgh Pirates (1990–96), Toronto Blue Jays (1997), Anaheim Angels (1998) and San Diego Padres (1999). He is a former Manager of the Pirates' Double-A affiliate, the Altoona Curve. In 2018, he became manager of the Acereros de Monclova of the Mexican League. 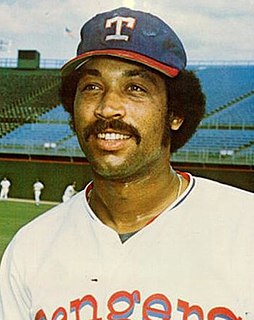 James Blair Bibby was an American Major League Baseball right-handed pitcher. During a 12-year baseball career, he pitched from 1972 to 1984 with the St. Louis Cardinals, Texas Rangers, Cleveland Indians, and Pittsburgh Pirates, with whom he was a member of its 1979 World Series Champions. He pitched a no-hitter against a team in the midst of a three-year dynasty. Also, in 1981, as a member of the Pirates, he missed out on a perfect game by just one hit, allowing a lead off single, before retiring the next 27 batters he faced. 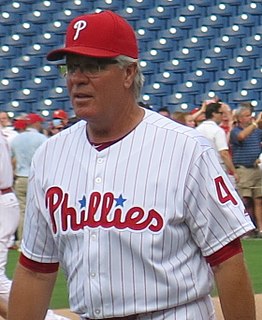 Jeffery Todd Banister is an American retired professional baseball player and manager. He is a special assistant for the Pittsburgh Pirates of Major League Baseball. He served as the manager of the Texas Rangers from 2015 through 2018. Before joining the Rangers, Banister spent 29 years within the organization of the Pirates as a player and coach in both the Pirates' major and minor league system.

Timothy Paul Bogar is an American Major League Baseball coach and a former infielder, manager, and front-office executive. In 2018, he became the Washington Nationals’ first base coach under manager Dave Martinez.

Cornelius Joseph Ryan was an American professional baseball second baseman, third baseman, coach and manager who served as interim manager of two Major League Baseball teams, the 1975 Atlanta Braves and the 1977 Texas Rangers. A native of New Orleans who attended Louisiana State University, he batted and threw right-handed and was listed as 5 feet 11 inches (1.80 m) tall and 175 pounds (79 kg).

Robert Milacki, is a former professional baseball player who pitched in Major League Baseball between 1988 and 1996, mostly with the Baltimore Orioles.

David Earl Clark is an American former outfielder in Major League Baseball who played from 1986 to 1998. He is currently the first base coach and outfield instructor for the Detroit Tigers. He served as manager of the Houston Astros Double-A affiliate, the Corpus Christi Hooks, from 2005 to 2007, and led them to the Texas League Championship in 2006. He also served as the manager of the Houston Astros' Pacific Coast League Triple-A affiliate, the Round Rock Express and served as the manager for the Huntsville Stars, the double-A affiliate for the Milwaukee Brewers. He was the interim Manager for the Houston Astros at the end of the 2009 season.

Nicholas Tomas Leyva is an American former professional baseball player, coach, and manager. After his retirement as a Minor League Baseball (MiLB) player, most of Leyva’s baseball career was spent as a coach. His Major League Baseball (MLB) coaching stops included the St. Louis Cardinals, Toronto Blue Jays, Milwaukee Brewers, and Pittsburgh Pirates. Leyva was the manager of the Philadelphia Phillies from 1989 though early 1991.

Eugene Walter Baker was an American Major League Baseball infielder who played for the Chicago Cubs and Pittsburgh Pirates during eight seasons between 1953 and 1961, and was selected for the National League team in the 1955 All-Star Game. He threw and batted right-handed, and was listed at 6 feet 1 inch (1.85 m), 170 pounds (77 kg).

Philip Trent Jewett is an American baseball coach and former minor league baseball player. He recently served as the bench coach for the Seattle Mariners from 2014 to 2015. He spent 2013 as the third-base coach of the Washington Nationals. Jewett joined the Nationals' coaching staff at the beginning of 2011 as a Major League coach, and later spent part of 2011 and all of 2012 as the Nationals' first-base coach.

Romanus "Monty" Basgall was an American professional baseball player, manager, coach and scout. A former second baseman who appeared in 200 Major League Baseball games for the Pittsburgh Pirates, Basgall became a longtime member of the Los Angeles Dodgers' organization who served as the bench and infield coach for Hall of Fame managers Walter Alston and Tommy Lasorda for 14 seasons (1973–86). During that time, he worked with four National League pennant winners, as well as the 1981 World Series-champion Dodgers. During his playing career, Basgall stood 5 feet 10 inches (1.78 m) tall, weighed 175 pounds (79 kg) and threw and batted right-handed.

Brian Joseph Bixler is an American former professional baseball shortstop and outfielder. He has played in Major League Baseball (MLB) for the Pittsburgh Pirates, Washington Nationals and Houston Astros as well as for the United States national baseball team.

Donald Thomas Long is an American professional baseball coach. He has been the Baltimore Orioles' hitting coach on manager Brandon Hyde's staff since January 2019. It will be Long's ninth year as a Major League Baseball (MLB) hitting coach, after previous service in the role for the Pittsburgh Pirates (2008–2010) and Cincinnati Reds (2014–2018).

Frank John Oceak was an American professional baseball player and coach. He was an infielder and manager in minor league baseball and served as a coach in Major League Baseball for 11 seasons between 1958 and 1972. A trusted confidant of four-time Pittsburgh Pirates manager Danny Murtaugh, Oceak was coaching at third base on October 13, 1960, during Game 7 of the 1960 World Series, when Pirate second baseman Bill Mazeroski hit his dramatic walk-off home run to clinch the Series against the New York Yankees. Oceak, wearing uniform #44, can be seen in many of the films and still photos of the historic event, celebrating with Mazeroski as he rounds third base and following him to home plate.

Perry Wendell Hill is an American professional baseball coach. He is the first base and infield coach for the Seattle Mariners of Major League Baseball (MLB). He formerly coached for the Texas Rangers, Detroit Tigers, Montreal Expos, Florida Marlins, Pittsburgh Pirates, and Miami Marlins.

Matthew Donald Hague is an American former professional baseball first baseman. He has played in Major League Baseball (MLB) for the Pittsburgh Pirates and Toronto Blue Jays, and in Nippon Professional Baseball (NPB) for the Hanshin Tigers. Prior to beginning his professional career, he played college baseball at the University of Washington and Oklahoma State. In early 2020, he joined the Blue Jays organization as a coach.

Joshua Rashaad Johnson is an American professional baseball former infielder and current coach in the Texas Rangers organization. He was previously a coach for the San Diego Padres of Major League Baseball (MLB).

William Corey Ragsdale is an American professional baseball former player and current coach. He is the major league field coordinator for the Texas Rangers of Major League Baseball (MLB).