Baseball America is a sports magazine that covers baseball at every level, with a particular focus on up-and-coming players in high school, college, Japan, and the minor leagues. It is currently published in the form of a bi-weekly newspaper, five annual reference book titles, a weekly podcast, and a website. It also regularly produces lists of the top prospects in the sport, and covers aspects of the game from a scouting and player-development point of view. The publication's motto is "Baseball news you can't find anywhere else."

Baseball America was founded in 1981 and has since grown into a full-service media company. Founder Allan Simpson began writing the magazine from Canada, originally calling it the All-America Baseball News. By 1983, Simpson moved the magazine to Durham, North Carolina, after it was purchased by then-Durham Bulls owner Miles Wolff. Simpson left his position at the magazine in 2006.

Baseball America is published bi-weekly in print and on the web. Every issue features coverage of the majors, minors, baseball's draft, college and high school baseball. Other features include reviews and analysis of prospects as well as tracking the progress of the best players in amateur baseball and the minors. [2]

Baseball America Rookie of the Year

Note: Each year's team consists of a varying number of pitchers and types of pitchers.

Baseball America Manager of the Year

Baseball America Organization of the Year

In addition to the awards below, Baseball America releases rankings of the top 25 teams in the nation, as voted by its staff. A preseason poll is compiled, in addition to a weekly poll during the season.

Hideo Nomo is a Japanese retired baseball pitcher who played in Nippon Professional Baseball (NPB) and Major League Baseball (MLB). He achieved early success in his native country, where he played with the Kintetsu Buffaloes from 1990 to 1994. He then exploited a loophole to free himself from his contract, and became the first Japanese major leaguer to permanently relocate to MLB in the United States, debuting with the Los Angeles Dodgers in 1995. Although he was not the first Japanese player in American professional baseball, Nomo is often credited with opening the door for Japanese players in MLB, due to his star status. 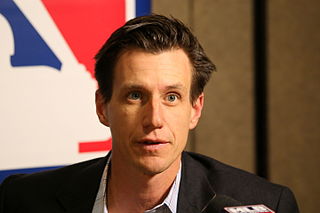 Craig John Counsell is an American former professional baseball player who is the manager for the Milwaukee Brewers of Major League Baseball (MLB). He was an infielder who played sixteen seasons for five teams. Counsell has been the Brewers' manager since May 2015. 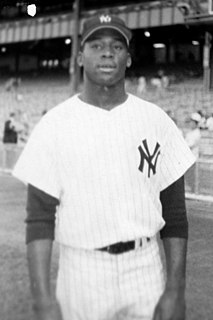 Alphonso Erwin Downing is an American former professional baseball pitcher. He played in Major League Baseball for the New York Yankees, Oakland Athletics, Milwaukee Brewers, and Los Angeles Dodgers from 1961 through 1977. Downing was an All Star in 1967 and the National League's Comeback Player of the Year in 1971. Downing allowed Hank Aaron's record breaking 715th home run on April 8, 1974.

John E. Boles Jr. is an American former professional baseball front-office executive, manager in minor league and Major League Baseball, and college baseball head coach. As of 2013, he was the senior adviser to the general manager for player development for the Kansas City Royals.

Andrew Friedman is an American baseball executive. He is currently the President of Baseball Operations of the Los Angeles Dodgers of Major League Baseball (MLB). He previously served as the general manager for MLB’s Tampa Bay Rays, where Sporting News named him Executive of the Year in 2008. That year, for the first time in franchise history, the Rays both qualified for the playoffs and played in the World Series. In Los Angeles, as of 2020, Friedman and the Dodgers have won a World Series, three pennants, and six division titles since he took the job after the 2014 season. Baseball America called the Dodgers the model franchise in the sport under Friedman’s tenure as President. 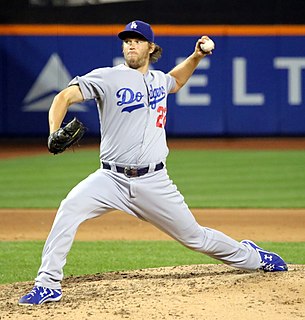 Clayton Edward Kershaw is an American professional baseball pitcher for the Los Angeles Dodgers of Major League Baseball (MLB). A left-handed starting pitcher, Kershaw has played 13 seasons in the major leagues since he debuted in 2008. He is an eight-time All-Star, three-time National League (NL) Cy Young Award winner, and the 2014 NL Most Valuable Player. His 2.43 career earned run average (ERA) and 1.00 walks plus hits per inning pitched rate (WHIP) are the lowest among starters in the live-ball era. Kershaw has a career hits allowed per nine innings pitched average of 6.78, the second-lowest in MLB history. He has been described for much of his career as the best pitcher in baseball. 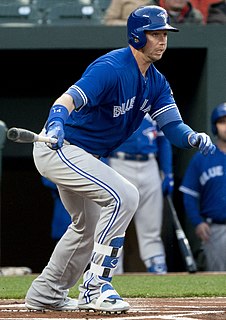 Manuel Bañuelos is a Mexican professional baseball pitcher for the Fubon Guardians of the Chinese Professional Baseball League (CPBL). He previously played in Major League Baseball (MLB) for the Atlanta Braves and Chicago White Sox. 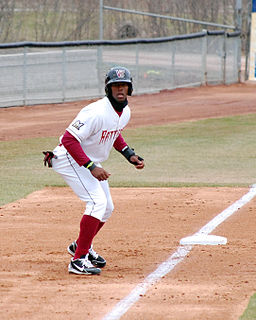 Almon Victor Roache is an American professional baseball outfielder who is currently a free agent.

Jacob "Jake" Samuel Lemmerman is a former minor league baseball shortstop who is a free agent.

Shawn Joubert Zarraga is an Aruban former professional baseball catcher. He played for the Netherlands national baseball team in the 2015 WBSC Premier12 and 2017 World Baseball Classic.

Isan Xavier Díaz is a Puerto Rican professional baseball second baseman for the Miami Marlins of Major League Baseball (MLB). He made his MLB debut on August 5, 2019.

Heliot Lemuel Ramos Lebrón is a Puerto Rican professional baseball outfielder in the San Francisco Giants organization. The Giants selected Ramos in the first round, with the 19th overall selection, of the 2017 MLB draft.