Last updated June 26, 2020
This article is about the 2007 Major League Baseball season only. For information on all of baseball, see 2007 in baseball.
Sports season

A special exhibition game known as the "Civil Rights Game" was played on March 31 in AutoZone Park in Memphis, Tennessee, between the Cardinals and the Cleveland Indians to celebrate the history of civil rights in the United States. The 2007 season commemorates the 60th anniversary of Jackie Robinson's entry into the game, breaking the color barrier.

Also, this was the second consecutive season in which no team won at least 60% of its games, the first time that this has happened in Major League Baseball history.

Barry Bonds, left fielder for the San Francisco Giants, surpassed Hank Aaron as the all-time home run leader in Major League Baseball history with his 756th career home run off Mike Bacsik of the Washington Nationals in the fifth inning of their game August 7 at AT&T Park in San Francisco, California. The 3–2 pitch with one out and nobody on base was hit at 8:51 PM US PDT and according to hittrackeronline.com was estimated to have gone 422 feet. However, the Nationals came back and won the game, 8–6. Through his final home game (and last game of the season), on September 26, Bonds has hit 762 home runs.

The baseball that was hit for the record was caught by Mets fan Matt Murphy, who put the ball up for auction online. The winning bidder was fashion designer Marc Ecko, who purchased the baseball for $752,467 (US) and let fans decide what to do with it in an internet poll. Options included donating the ball to the Baseball Hall of Fame as-is, donating it marked with an asterisk (reflecting the widely held belief that Bonds used performance-enhancing drugs to break the record), or sending the baseball into space. The vote decided that an asterisk would be added, and the ball donated to Cooperstown. In an interview that aired on MSNBC's Countdown with Keith Olbermann on November 1 and 2, Bonds stated to interviewer Jim Gray that if the ball were to be put on display with the asterisk, he would boycott his own Hall of Fame induction if he were elected.

On July 10, 2007, at AT&T Park in San Francisco, the American League defeated the National League by a score of 5–4. The victory was the tenth consecutive (excluding the 2002 tie) for the AL, and their eleven-game unbeaten streak matches only the NL's streak from 1972 to 1982 in All-Star history.

On April 15, Major League Baseball celebrated the sixtieth anniversary of the debut of Jackie Robinson at Ebbets Field in Brooklyn, breaking the color barrier. Cincinnati Reds outfielder Ken Griffey Jr. asked Robinson's widow, Rachel, and commissioner Bud Selig for permission to wear Robinson's number 42 in honor of him. He was granted permission, and Selig later said that any player who wanted to wear number 42 on his jersey could. The jersey was worn without the players' name on the back, as was the case when Robinson played with the Brooklyn Dodgers. All jerseys that were worn were auctioned off with all the proceeds donated to the Jackie Robinson Foundation, an organization which awards scholarships to African-American high school graduates to further themselves in colleges academically.

The Dodgers, Cardinals, and Brewers elected to have the entire team wear number 42 in his honor. The Pittsburgh Pirates, Phillies, and Astros were also scheduled to share that honor, but their games were postponed due to rain. The Phillies and Astros honored Robinson on April 23 when they made up their postponed game as originally planned, while the Pirates waited until April 27 to honor Robinson by wearing #42 as a team against the Reds.

On August 10, the Cleveland Indians paid tribute to Larry Doby, the first African-American to play in the American League at Jacobs Field in Cleveland, Ohio. Every player on the Indians wore number 14, the number Doby wore during his career with the Indians.

Craig Biggio
Biggio joined the 3,000 hit club during the 2007 season, and became the first player to be called out in the same play that they got their 3000th hit. He was tagged out while trying to stretch his hit into a double. He announced his retirement on July 24, about a month after achieving the milestone. He finished his career with 668 doubles, good for 5th all-time at the time he retired. In the penultimate game of his career, on September 29, he was brought in as a catcher, playing the position for the first time in 15 years.

Jeff Conine
Conine, then of the New York Mets, announced his retirement on September 20, right before their last road trip to visit the Florida Marlins. The Marlins, fans of which refer to him as "Mr. Marlin", honored him for his contribution to their two World Series titles in 1997 and 2003. Ironically, losses to the Marlins contributed to the Mets failing to make the playoffs.

Player of the Month

Pitcher of the Month

Rookie of the Month

Josh Hancock, a relief pitcher with the St. Louis Cardinals, died on April 29 in a car accident outside St. Louis, Missouri. The 29-year-old pitcher was killed within a couple of minutes after impact when the SUV he was driving crashed into a towing vehicle on Interstate 64. This marks the second time in five years that a Cardinals pitcher lost his life before a game, the other being Darryl Kile, who died suddenly on June 22, 2002. The team postponed their game scheduled for later that day against the Chicago Cubs to pay respect to Hancock.

A police report revealed that Hancock was intoxicated at the time of his fatal accident with a blood-alcohol level of 0.157, nearly double the legal limit in Missouri. Police also found 8.55 grams of marijuana along with a glass smoking pipe in his vehicle, although toxicology tests later proved no drugs were in his system except alcohol. In addition, Hancock was talking on a cell phone when the accident occurred and was not wearing a seatbelt. An accident reconstruction team determined that Hancock was driving 68 mph in a 55 mph zone. [13] 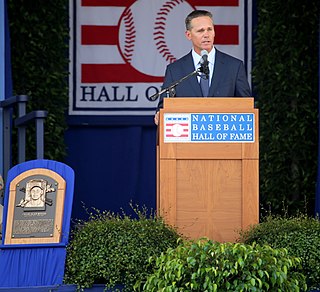 Craig Alan Biggio is an American former second baseman, outfielder and catcher in Major League Baseball who played his entire career from 1988 through 2007 for the Houston Astros. A seven-time National League (NL) All-Star often regarded as the greatest all-around player in Astros history, he is the only player ever to be named an All-Star at both catcher and second base. With longtime teammates Jeff Bagwell and Lance Berkman, he formed the core of the "Killer B's" who led Houston to six playoff appearances from 1997 to 2005, culminating in the franchise's first World Series appearance in 2005. At the end of his career, he ranked sixth in NL history in games played (2,850), fifth in at bats (10,876), twenty-first in hits (3,060), and seventh in runs scored (1,844). His 668 career doubles ranked fifth in major league history, and are the most ever by a right-handed hitter; his 56 doubles in 1999 were the most in the major leagues in 63 years.

Brian Nikola Anderson is an American former professional baseball player. He played all or part of five seasons in Major League Baseball with the Chicago White Sox and Boston Red Sox as an outfielder, a position he played professionally until before the 2010 season. He also played for the Kansas City Royals and New York Yankees organizations as a pitcher.

The 2008 Major League Baseball season began on March 25, 2008, in Tokyo, Japan with the 2007 World Series champion Boston Red Sox defeating the Oakland Athletics at the Tokyo Dome 6–5 in the first game of a two-game series, and ended on September 30 with the host Chicago White Sox defeating the Minnesota Twins in a one-game playoff to win the AL Central division. The Civil Rights Game, an exhibition, in Memphis, Tennessee, took place March 29 when the New York Mets beat the Chicago White Sox, 3–2.

The 2009 Major League Baseball season began on April 5, 2009, the regular season was extended two days for a one-game playoff between the Detroit Tigers and the Minnesota Twins to decide the American League Central Division champion. The postseason began the next day with the Division Series. The World Series began on October 28, and ended on November 4, with the New York Yankees defeating the Philadelphia Phillies in six games. This was the second time the season was completed in November. The only other occasion was the 2001 World Series, because of the delaying of the end of that season due to the September 11 attacks as November baseball would be guaranteed when Game 4 was played on Sunday, November 1. Had the 2009 World Series gone the full seven games, Game 7 would've been played on November 5, the latest date ever scheduled for a World Series game. American League champion had home field advantage for the World Series by virtue of winning the All-Star Game on July 14 at Busch Stadium in St. Louis, Missouri, 4–3. In addition, the annual Civil Rights Game became a regular season game, and was played June 20 at Great American Ball Park in Cincinnati, Ohio, when the host Cincinnati Reds lost to the Chicago White Sox in an interleague game, 10–8. Both teams wore replicas of their 1965 uniforms in the contest.

The 2011 Major League Baseball season began on Thursday, March 31, and ended on Wednesday, September 28. This marked the first time a season began on a Thursday since 1976, and the first time a regular season ended on a Wednesday since 1990. The 82nd edition of the Major League Baseball All-Star Game was played at Chase Field in Phoenix, Arizona, on July 12 with the National League defeating the American League for the second straight year, by a score of 5–1. As has been the case since 2003, the league winning that game has home field advantage in the World Series. Accordingly, the World Series began on October 19, and ended on October 28, with the St. Louis Cardinals winning in seven games over the Texas Rangers.

Robert Charles Christian was an American professional baseball player who played seven seasons (1964–1970) in North America — including parts of three seasons in the Major Leagues with the Detroit Tigers and Chicago White Sox — and two more years (1971–1972) in Japan. A third baseman and outfielder, he threw and batted right-handed, stood 5 feet 10 inches (1.78 m) tall and weighed 180 pounds (82 kg).