Gregory Scott Jefferies (born August 1, 1967) is a retired infielder/outfielder in Major League Baseball who had a 14-year career from 1987 to 2000. He was a highly touted prospect who became the first two-time winner of the Baseball America Minor League Player of the Year Award. On August 25, 1995 in a game vs the Dodgers at Veterans Stadium Gregg Jefferies became the first Phillie to hit for the cycle since Johnny Callison in 1963. In 2017, Baseball America called him their most highly regarded prospect until Andruw Jones. [1] He went on to become a two-time All-Star.

Jefferies was born in Burlingame, California to Rich and Joan Jefferies. Rich, the baseball coach at Parkside High School in San Bruno, California, developed Jefferies as a baseball player by pushing him through an intense workout eight hours a day, six days week which involved, among other things, swinging a baseball bat underwater. [2] [3] Jefferies attended Junípero Serra High School in San Mateo, California where he played baseball and football. [4] While he was in high school, his brother, Dean, was playing baseball at the University of San Francisco. [2] Jefferies initially committed to play both college baseball and football at Cal State Fullerton after high school. [4]

Drafted by the New York Mets out of Junípero Serra High School in the first round of the 1985 amateur draft (#20 overall), Jefferies hit .331 in his first year in the minor leagues, moving from Kingsport of the Appalachian League (rookie) to Jackson of the Texas League (AA) in two years. He was named Baseball America's Minor League Player of the Year for both 1986 and 1987, becoming the first player to receive that distinction in consecutive years. [3] He hit .367 with 20 home runs, 48 doubles and 101 RBI for Jackson in the in 1987, earning Jefferies a brief call-up the New York Mets at the end of the 1987 season. He went 3 for 6 in 6 games, at the age of 19, making him the youngest player in the Major Leagues that season.

The Mets decided they needed to make room for Jefferies, but didn't know where to play him, as the veteran team was full at the spots Jefferies played in the minor leagues (shortstop, third base and second base). The outfield was full also, with the team finding it difficult to get outfielders Lenny Dykstra and Mookie Wilson playing time alongside Darryl Strawberry and Kevin McReynolds, so Jefferies was sent to AAA Tidewater to start the 1988 season.

After spending most of the 1988 season at AAA (where he hit .282), Jefferies was recalled at the end of August and allowed to play out the year as a starter, mostly at third base. He responded by hitting .321 over the last 29 games of the 1988 season. The team had an MLB-best 24-7 record after his debut and finished with a league-best 100 wins en route to the National League East title. [3]

The Mets made a full-time roster spot for Jefferies when they traded Wally Backman to the Minnesota Twins, leaving second base open for Jefferies. But Jefferies faltered, hitting .258 with little selectivity as a rookie in 1989.

During a game against the Philadelphia Phillies on September 27, 1989, Jefferies was the last batter to ground out before the Mets lost the game. Jefferies then heard some unkind comments from his former teammate, Roger McDowell and then charged the mound starting a bench-clearing brawl.

In response to criticism from teammates, on May 24, 1991, Jefferies pleaded his case in an open letter read on WFAN, New York's sports radio station. In the letter, Jefferies wrote: "When a pitcher is having trouble getting players out, when a hitter is having trouble hitting, or when a player makes an error, I try to support them in whatever way I can. I don't run to the media to belittle them or to draw more attention to their difficult times. I can only hope that one day those teammates who have found it convenient to criticize me will realize that we are all in this together. If only we can concentrate more on the games than complaining and bickering and pointing fingers, we would all be better off." [5] In 2020, Jefferies denied having written the letter but would not reveal its true author or authors. [3]

In 1990, Jefferies raised his batting average up to .283 while scoring 96 runs and hitting 40 doubles, but the team finished 2nd for the second straight year. He slipped in 1991, hitting .272 with 30 extra base hits in 486 at bats as the team slipped to 5th place. That offseason the team traded him, along with McReynolds and infielder Keith Miller, to the Kansas City Royals for former All-Star pitcher Bret Saberhagen and utility man Bill Pecota, ending his stay with the Mets.

After playing the 1992 season with the Royals, he moved on to the St. Louis Cardinals, where he would have his two best seasons, batting .342 and .325, respectively, while finding a home at first base and being named to the National League All-Star team in both the 1993 and 1994 seasons. He signed a lucrative contract with the Philadelphia Phillies after the 1994 season due to a dispute over a no-trade clause the Cardinals wouldn't give him, and he moved to the outfield for the Phillies, where he performed adequately over the 1995, 1996 and 1997 seasons, but injuries to his thumb and hamstring hampered his effectiveness. In 1998, he was traded mid-season to the Anaheim Angels, where he hit .347 in 19 games before moving to the Detroit Tigers the next year. He hit a collective .231 for the Tigers over two seasons before he retired in 2000 due in part to a severed right hamstring. [6]

In 2020, he told the St. Louis Post-Dispatch that he was "absolutely not" content with what he accomplished in his career. [6]

As of March 2020 [update] , Jefferies has a total of four children from two marriages. [3] His son Jake was selected by the Washington Nationals in the 39th round of the 2015 Major League Baseball draft. [8] 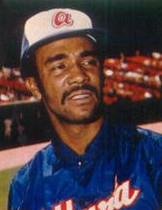 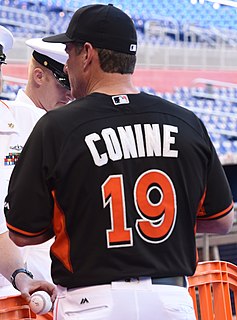 Jeffrey Guy Conine is an American former professional baseball left fielder / first baseman, who played in Major League Baseball (MLB) for 17 seasons, with six teams. An inaugural member of the Florida Marlins who was with the franchise for both of its World Series titles, he earned the title Mr. Marlin for his significant history with the club, and his ties to South Florida.

Delbert Bernard Unser is an American former professional baseball center fielder and utility player who had a 15-year Major League Baseball career, from 1968 to 1982. 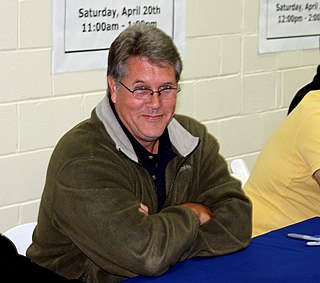 Walter Kevin McReynolds is an American former baseball player who was an outfielder with a 12-year career in Major League Baseball (MLB) from 1983 to 1994. A two-time All-American from the University of Arkansas, he played professionally for the San Diego Padres and New York Mets of the National League and the Kansas City Royals of the American League. 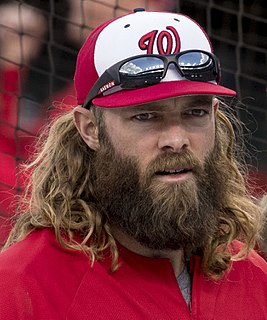 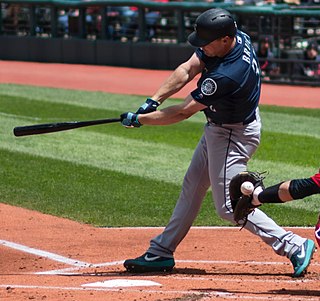 Jay Bruce is an American professional baseball corner outfielder for the Philadelphia Phillies of Major League Baseball (MLB). He previously played for the Cincinnati Reds, New York Mets, Cleveland Indians, and Seattle Mariners. The Reds drafted Bruce in the first round, 12th overall pick, of the 2005 Major League Baseball draft; he made his MLB debut in 2008. Bruce has been named an All-Star three times during his career, and has won the Silver Slugger Award twice.

The New York Mets' 1992 season was the 31st regular season for the Mets. The Mets entered the season attempting to improve on their 1991 season, where due in part to a second half collapse they finished 78-84 and recorded their first losing record since 1983. Instead, they had a worse record of 72-90, missing the playoffs for the 2nd consecutive year. All 81 of the Mets' home games were played at Shea Stadium. 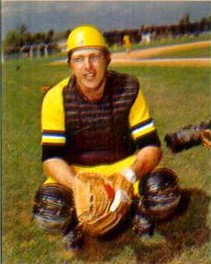 Nathan Edward Ott, nicknamed "Otter", is an American former professional baseball player, coach and manager who played eight seasons in Major League Baseball (MLB) as a catcher and outfielder from 1974 to 1981, most notably as a member of the Pittsburgh Pirates with whom he won a World Series championship in 1979. He also played for the California Angels. Ott was a left-handed batter and threw right-handed.

Gregory Stuart Dobbs, is an American former professional baseball infielder, who played in Major League Baseball (MLB) for the Seattle Mariners, Philadelphia Phillies, Florida / Miami Marlins, and Washington Nationals. While Dobbs was primarily a third baseman, he could also play the corner outfield positions and first base.

Below are select minor league players and the rosters of the minor league affiliates of the Oakland Athletics: 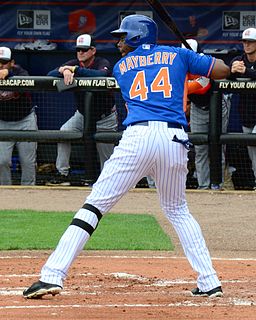 McKenzie Corey Dickerson is an American professional baseball outfielder for the Miami Marlins of Major League Baseball (MLB). He has previously played in MLB for the Colorado Rockies from 2013 through 2015, the Tampa Bay Rays in 2016 and 2017, the Pittsburgh Pirates in 2018 and 2019, and the Philadelphia Phillies in 2019.

Darin Cortland Ruf is an American professional baseball first baseman and outfielder for the San Francisco Giants of Major League Baseball (MLB). He was born in Omaha, Nebraska, and played at Westside High School. Subsequently, he attended Creighton University, and excelled playing baseball there before the Philadelphia Phillies drafted him in 2009. In the minor leagues, he initially hit for a high batting average, but in 2011 combined that with power numbers to become one of the Phillies' top prospects. In 2012 he led the minor leagues with 38 home runs. He made his major league debut in September 2012. In 2013, he split time between Triple-A and the major league Phillies, and was among the league's top rookies. He was embroiled in a roster battle for a bench spot entering 2014, but hurt his oblique, and landed on the disabled list prior to the season. In 2017 he led the Korea Baseball Organization in RBIs.

Dominic David Rene Smith is an American professional baseball first baseman for the New York Mets of Major League Baseball (MLB). He was selected by the Mets with the 11th overall pick of the 2013 MLB draft out of Junípero Serra High School in Gardena, California, and made his MLB debut in 2017. He bats and throws left-handed. His nickname, Medium Hurt, originates from a play on words of Hall-of-Famer Frank Thomas's nickname of the Big Hurt.